New: A Guide to getting publishedin UK poetry magazines

New: A Guide to getting publishedin UK poetry magazines

Rather unlike me but I decided on the spur of the moment to go to the Cork Poetry Festival! Having followed a tweet about it, I looked to see how possible/expensive it might be to go, and before I kne… January 28, 2019Robin Houghton Blog,Events,Writing Cork International Poetry Festival,poetry festvals Read More

What Mary Oliver said about distractions

One of the first books I bought and consumed (once I started thinking it possible I could write the odd semi-decent poem) was Mary Oliver’s A Poetry Handbook, along with Julia Cameron’s Th… January 20, 2019Robin Houghton Blog,Books,Inspiration,Writing Brain Pickings,creative process,Mary Oliver Read More

This is the first year in a while that I haven’t been driving up to the Southbank for the T S Eliot Prize readings this evening. I’ll look forward to reading all about it on various blogs.… January 13, 2019Robin Houghton Blog,Books,Mags & Blogs,Readings,Submissions city walks,claire dyer,jo bell,katy evans-bush,kith,london,nine arches press,obsessed with pipework,reading poets cafe Read More

Dear oh dear. Well, I promise to deliver the ‘ups and downs’ of poetry submissions, and 2018 was slim pickings for sure. Number of poems sent out to journals:  25 Number accepted: 4 Numbe… January 7, 2019Robin Houghton Blog,Rejections,Roundups,Submissions 2018 roundup,acceptances,rejections,submissions Read More

The view, looking back

I’m just taking a moment to post what will probably be my last of 2018, and I have to be careful not to descend into a sort of ’round robin’ where I refer to myself in the third pers… December 21, 2018Robin Houghton Blog,Events,Roundups abigail parry,Alice Oswald,cinnamon press,Danez Smith,garsdale retreat,ian duhig,katy evans-bush,Raymond Antrobus,swindon poetry festival,The Poetry Book Society Read More

Enter your email address to subscribe to this blog and receive notifications of new posts by email.
Join 3,689 other subscribers.

The official poet biog
Robin Houghton’s work appears in many magazines including Agenda, Bare Fiction, Envoi, Magma, Poetry News and The Rialto, and in numerous anthologies. Also in The Best New British and Irish Poets 2017 (Eyewear). She won the Hamish Canham Prize in 2013, the Stanza Poetry Competition in 2014 (and was runner-up in the same competition in 2016) and the New Writer Competition in 2012. Her pamphlet The Great Vowel Shift was published by Telltale Press, the poets’ collective she co-founded in 2014. In 2017 she self-published a handmade limited edition mini-pamphlet Foot Wear. After winning the Cinnamon Press Poetry Pamphlet competition in 2017, Robin’s third pamphlet, All the Relevant Gods is out from Cinnamon in February 2018. She blogs at robinhoughtonpoetry.co.uk

The chatty version
After 30+ years of trying to write poetry, I decided to stop mucking about and to set myself the goal of getting a poem published in a reputable magazine. I needed a sign, if you like, that I had some modicum of talent worth working on.The Gods of Poetry (in the shape of Michael Mackmin at The Rialto) gave me that sign in 2010, and it made me serious about writing and reading poetry.Since then I’ve had quite a few poems published, and my third pamphlet (short collection) All the Relevant Gods is published by Cinnamon Press in February 2018.In 2014 I got together with Peter Kenny to form Telltale Press, a poets’ publishing collective. We now have five members, and as well as publishing members’ pamphlets we also hold regular readings and events. It’s fun and inspirational to work alongside other poets, encouraging and promoting each other and the Telltale ethos. I’ve learnt a lot from the experience. Until recently I lived in Lewes, a town with a vibrant community of fine poets from whom I’ve learned masses, among them Clare Best, Charlotte Gann, Jeremy Page, Catherine Smith & Janet Sutherland. I’ve also benefited greatly from workshops & courses led by Mimi Khalvati, Anne-Marie Fyfe, Carol Ann Duffy, Gillian Clarke, Jack Underwood, and John McCullough for New Writing South, an organisation that has supported me in many ways, for which I am grateful.For a year or so I was the Brighton Stanza Rep, and now I’m a member of the Hastings Stanza, a fine and supportive workshopping group run by Antony Mair.When I think about it, I’ve written for a living for over 20 years – but the kind of writing that pays isn’t poetry! As a marketer and copywriter it’s been words all the way, and since getting an MA in Digital Media in 2000 I’ve worked in online communications and latterly social media. (I was what they used to call an ‘early adopter’.) In recent years I’ve written five ‘how to’ books, three of which were commissioned and are still selling well in good bookshops. My agent is Charlotte Howard at Fox & Howard.

The story so far: where published, competitions, awards etc. Plus links to reviews & interviews.

Reviews of All the Relevant Gods:Review by Becky Varley-Winter at Sabotage ReviewsReview by Rachel Playforth at SphinxReview by Pam Thompson at London GripReview by Emma Lee on her blogReviews of The Great Vowel Shift:Review by Steve McQueen in The Interpreter’s House 62 Review by Jan Fortune in Envoi 172 Review by Martin Noutch at London GripReview by Afric McGlinchey at Sabotage ReviewsReview by Rebecca Gethin on her blogReview at Sphinx by Josephine Corcoran Review by Clare Best in The Frogmore Papers.

A couple of poems

Before the splicing
Once she’s cut her rope from the spoolit has a job to do: it may tie a boat to a cleat,secure a headsail in fair wind, bind a spellto teach her standing from her working end.The line is her friend. She’s witnessed timeand again the trouble caused by a heckledlay, how hard to untwist, unmake the same –worked so many nights, twined and reeled,shaped-shifting coiled sisal and greyed hemp,she’s whipped up frays and braided edges.So why does she fear the heat of the lampand the slipping loose of a thousand fastenings?She will dig out the core, feed a new line through,strong for the passing and the coming-to.First published in Prole 23, 2017

1 Poultry
Shoot up in the fast lift,poke the faux grass with toothpick heels.Late lunch at the Coq d’Argent –accept a drink, plan your exit.After two pm the old religion can be smelt –some urban Plague myth – even here,halfway to the holding stacksof City-bound planes.Look out to where domes are clouds,black antennas stricken trees, peopleblips fading from someone’s radar.A good place to fail.Tender is the man-made view.Look down where a scrawl of red tail-lightssings stop in the name of loveand windows laugh open.Two sips of Sauvignon Blanc and all Londonis under you, your parapet bendseye-level with skinny cranes,arms turning in a show of listening.First published in The Rialto 89, 2017Rishi Dastidar reviews ‘1 Poultry’ on The Rialto blog

Poetry Pamphlets
My latest pamphlet All the Relevant Gods was published in February 2018 by Cinnamon Press.In November 2017 I self-published a limited edition, hand-stitched, illustrated and numbered mini-pamphlet called Foot Wear. Some copies still available directly from me.My first pamphlet The Great Vowel Shift was published by Telltale Press in 2014. 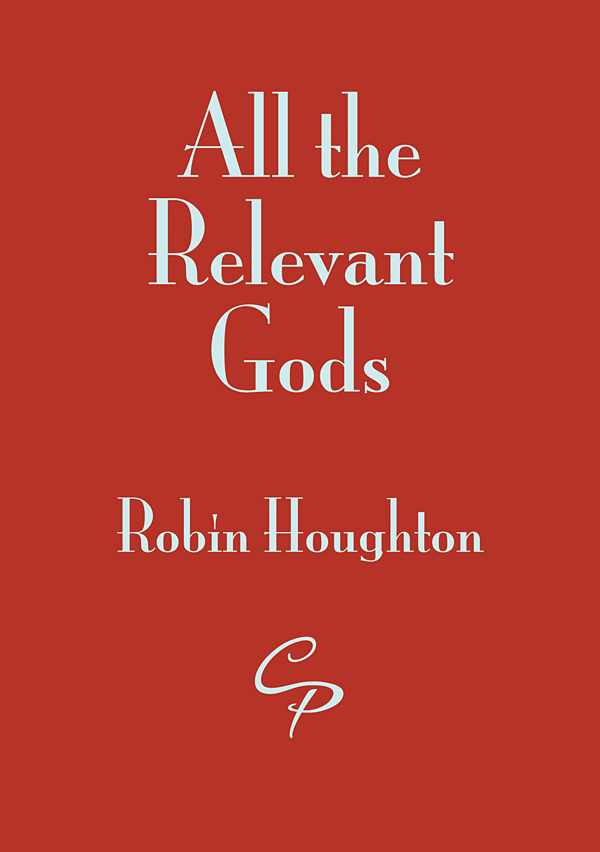 All the Relevant Gods“…persistently compelling” – Becky Varley-Winter in Sabotage Reviews“…an impressive range of reference… it deploys the specific to hint evoactively at larger concerns”  –  Ian Gregson” Confidently playful as well as seriously clever, these are poems that lodge in the memory and under the skin.” – Catherine Smith“Robin Houghton’s All the Relevant Gods bears the confident hallmarks of an accomplished poet ready for a first full collection. […] There is a nicely insinuated examination of mutability throughout this book, as well as a wry critique of globalisation and the contemporary mores….[…] what lends her critique moral strength is the fact that Houghton implicates herself in the million sins of expediency that we all commit while deploring their aggregate results. Her own experience of the corporate world yields an authenticity to poems like ‘Handmade in Guangzhou’ ‘1 Poultry’ and ‘She discovered the internet’. – Martin Malone in The Interpreter’s House“It’s refreshing to read a pamphlet willing to experiment with voice and style instead of tightly winding poems to a theme or restricting form to give poems a uniform feel.” – Emma Lee“Robin Houghton is a subtle poet: we recognise the places and circumstances of her poems yet, at the same time, she draws our attention consistently to what might be in ‘the unreachable corner of the room.’” – Pam Thompson in London Grip“the strength of good writing […] when a phrase or stanza unpeels itself weeks later, somewhere deep in your skull without you even remembering it was there in the first place” – Abigail Morley at The Poetry ShedFebruary 2018, ISBN 978-1-910836-95-8All the Relevant Gods – £4.99 to buy on the Cinnamon Press website. 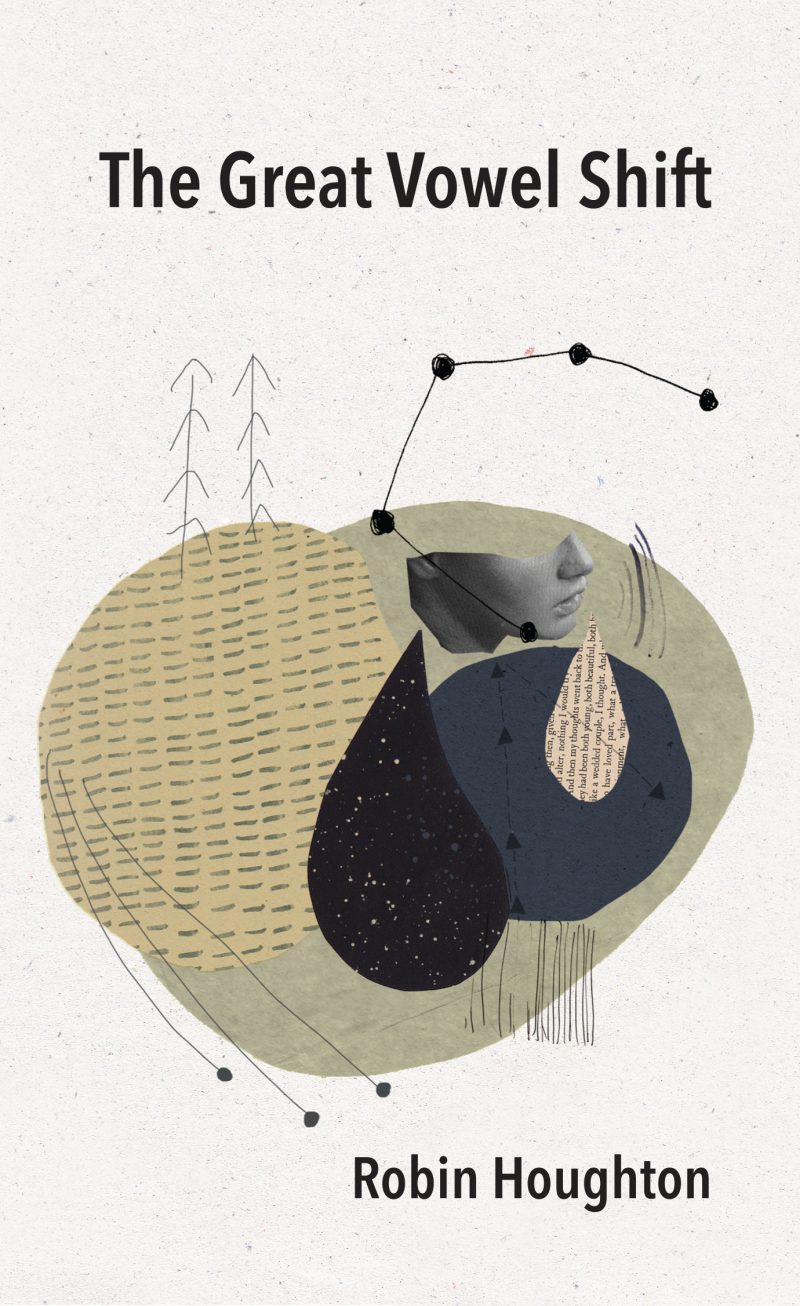 The Great Vowel ShiftThis debut pamphlet brings together poems published in a range of magazines including The Rialto, The North, Poetry News and Obsessed with Pipework.“a perfect little book full of powerful, subtle poems” – Hugh Dunkerley“… equally at home in poignancy and exuberance”– John McCullough“… an admirable balance of tenderness and terseness” – Hamish Canham Award judges on ‘Ellipsis’“… a sense of the oceanic is achieved with the minimum of words and props” – Pascale Petit on ‘Midnight Pickup’“… there is cleverness here, playfulness and personality” – Martin Noutch at London Grip. Read the full review.“… a beautifully balanced short pamphlet collection… each (poem) absolutely earns its place”– from Clare Best’s review in The Frogmore Papers 84March 2014, ISBN 978-09928555-0-5The Great Vowel Shift, £4 plus 60p postage (UK)

If you’d like to order more than one copy, or for orders outside the UK, please drop me a line at robin@robinhoughtonpoetry.co.uk

‘How to’ Books
I’ve written some ‘how to’ books on blogging & social media, based on 15 years’ experience in online marketing… 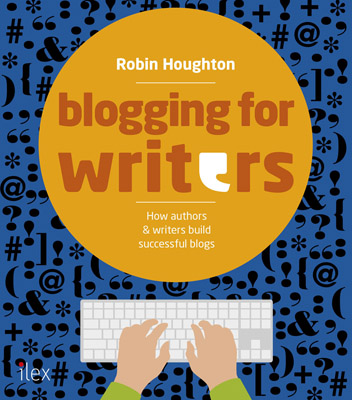 Blogging for Writers (Ilex Press, 2014)
“Really helpful book with clear explanations and good examples.” £14.99 from good booksellers or from Amazon. 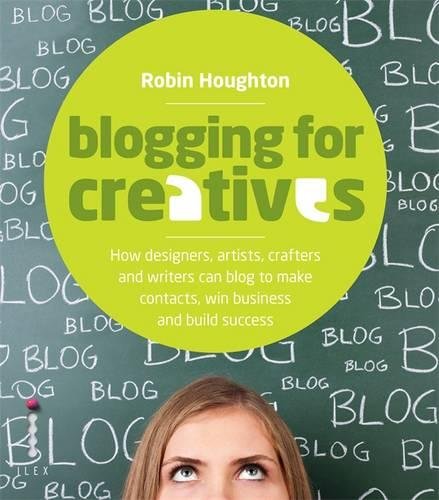 Blogging for Creatives (Ilex Press, 2012)
“Easy and inspiring for beginners and those blogging for a while.” The example websites are now most out of date, but much of the advice still holds.About £12 from good booksellers or from Amazon. 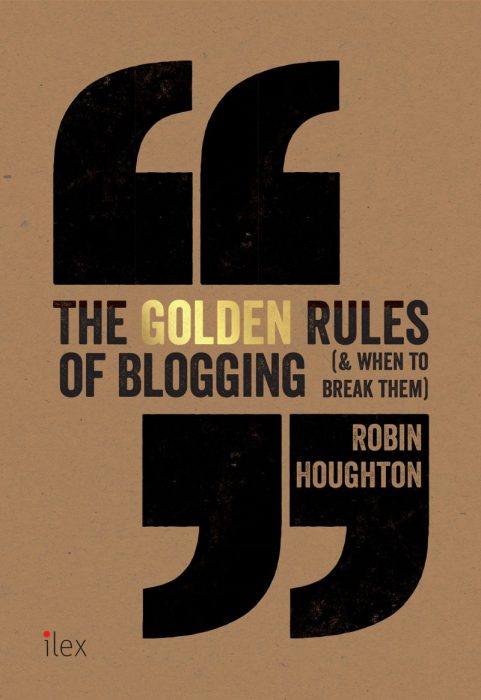 The Golden Rules of Blogging (and when to break them) (Ilex Press, 2015)
“An extremely easy to read, yet supremely useful, publication.” About £10 from good booksellers or from Amazon. 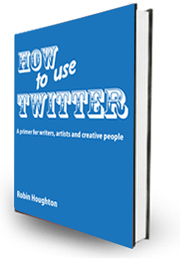 How to Use Twitter (ebook, 2016)
“A primer of actionable tips with easy-to-follow illustrations shows how best to use this powerful networking tool..”  Tablet/Kindle and PDF versions.£2.99 – full details and download/buy from my business website. (Offer: £4.99 for both Twitter ebooks in PDF format). 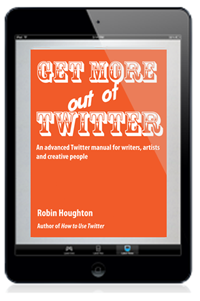 Get More out of Twitter (ebook, 2017)
More tips on how to manage Twitter and make best use of it – finding people and topics that matter, getting organised with a dashboard and  building your valuable Twitter network. Tablet/Kindle and PDF versions.£2.99 – full details and download/buy from my business website. (Offer: £4.99 for both Twitter ebooks in PDF format).

You’ll find me on Twitter and LinkedIn. I don’t use Facebook any more – if you’re curious you can find out why here…Contact me on robin@robinhoughtonpoetry.co.uk