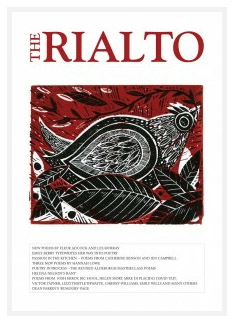 The Rialto: bedside reading for this week at least.

Very proud that I have a poem in it on page 50.

They’ve been coming since posters were invented:
sometimes in dreams, to the tipping of cowboy hats

or dressed in Liverpool shirts. Each one appeared
in my diary, in code. My mother wouldn’t explain,

I couldn’t ask.  And still they would come, insistent.
They left my body as they found it: I never wanted

them to stay, or change things. It’s been a while since
I wrote a diary. I don’t know how many there were,

I wasn’t counting.  Too busy getting on with
the business of getting on. For the last, though,

I would have thrown a party, marked the occasion
in some way, worn something red, if I had known.