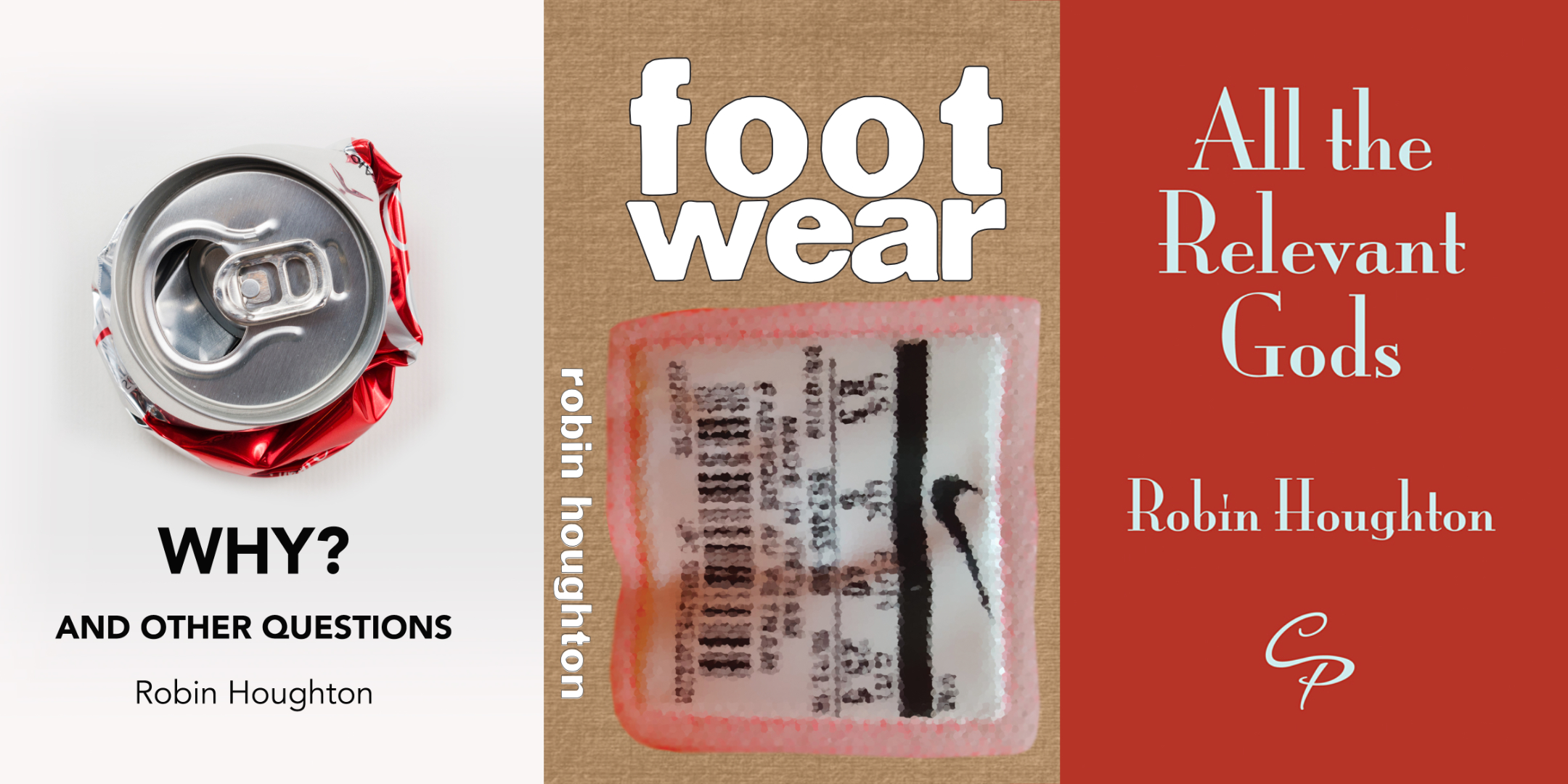 Why? And other questions

This pamphlet was a joint winner of the 2019 Live Canon Poetry Pamphlet Competition.

Review in Under the Radar by Julia Webb

OPOI review by Peter Raynard on the Sphinx blog.

Robin Houghton is a poet whose work I am already familiar, having previously reviewed her pamphlet All the Relevant Gods. There’s quite a different tone to these poems than the ‘gentle surrealism I noted in that earlier work. This pamphlet is, essentially, a series of vignettes concerning things removed, absent, gone, sometimes recovered. Thieves steal a Barbara Hepworth statue for scrap, elsewhere a father is rediscovered through a stone memorial to the Home Guard. in ‘Cut | Burn | Poison’, man destroys in order to defend a spurious notion of beauty:

cauterise the blades all good and clean   sterilise

to be saved by man

Elsewhere a mother lost to forgetfulness is recovered through an old black and white photograph. This latent conflict between our tendencies to make and mar, find and lose, is most strongly captured in a pair of poems, ‘Drowning the Doves, 1916’ and Under Hammersmith Bridge, 2016’, about the destruction and recovery of the Doves typeface, an arts and crafts metal font created by T. J. Cobden-Sanderson and then thrown into the Thames by him in a dispute with his business partner. The first poem is sympathetic to the act of destruction:

With each piece of type, a piece of himself also–the moon

as witness–bequeathed in bits to the river, rag and bone:

The second poem, dedicated to Robert Green, who was responsible for the physical recovery of 150 pieces of typeface from the river, is a kind of closure, the healing of a wound:

Because the beauty of letters lasts longer

than the exit strategies of wronged parties. U is underwater,

horseshoe-like, for luck. E is no longer the enemy, just water

under the bridge. H is what happened, and Q is the questioning

eyes of pike and passing barge men. D is for utter devotion.

And diving. E for even now, eventually. A, alone and always.

This sense that it is possible to recover that which was lost is central to the poems here. As Houghton writes in ‘Missed’, a poem about a taxi journey to an airport for a plane that won’t be caught ‘I will write about this one day. Maybe I’ll change the ending.’ It is our creative impulse that allows us to repair the damage.

Enjoying catching up on some reading. WHY? And Other Questions by @RobinHoughton from @LiveCanon is a heady mix of intriguing, meaty & poignant poems. Consume in one sitting or savour over several. #poetry #amreading pic.twitter.com/iFVvONBITe

Why? And other questions (Live Canon, November 2019)

£7 from the Live Canon shop

All the Relevant Gods

All the Relevant Gods was a joint winner of the Cinnamon Press Pamphlet Competition 2018.

“Confidently playful as well as seriously clever, these are poems that lodge in the memory and under the skin.” – Catherine Smith

“Robin Houghton’s All the Relevant Gods bears the confident hallmarks of an accomplished poet ready for a first full collection. […] There is a nicely insinuated examination of mutability throughout this book, as well as a wry critique of globalisation and the contemporary mores….[…] what lends her critique moral strength is the fact that Houghton implicates herself in the million sins of expediency that we all commit while deploring their aggregate results. Her own experience of the corporate world yields an authenticity to poems like ‘Handmade in Guangzhou’ ‘1 Poultry’ and ‘She discovered the internet’.” – Martin Malone in The Interpreter’s House

“…the strength of good writing […] when a phrase or stanza unpeels itself weeks later, somewhere deep in your skull without you even remembering it was there in the first place” – Abegail Morley at The Poetry Shed

Review by Rachel Playforth at Sphinx

Review by Pam Thompson at London Grip  (“Robin Houghton is a subtle poet: we recognise the places and circumstances of her poems yet, at the same time, she draws our attention consistently to what might be in ‘the unreachable corner of the room.'”)

Review by Emma Lee on her blog (“It’s refreshing to read a pamphlet willing to experiment with voice and style instead of tightly winding poems to a theme or restricting form to give poems a uniform feel.”)

…and an interesting analysis of my poem ‘1 Poultry’ on The Rialto blog, by associate editor Rishi Dastidar.

“… equally at home in poignancy and exuberance”– John McCullough

Reviewed by Steve McQueen in The Interpreter’s House 62

Reviewed by Jan Fortune in Envoi 172

Review by Rebecca Gethin on her blog

Review at Sphinx by Josephine Corcoran

NB For pamphlet orders outside the UK there may be a shipping cost.