Morning! It’s time for a little blog tour… the lovely Jayne Stanton invited me to take part in the ‘My Writing Process’ tour (or ‘meme’ in internet parlance). There must have been thousands of writers already taken the tour. The idea is to answer the same four set questions, then to nominate three more writers to take up the challenge.

I’ve recently been commissioned to write two books about blogging. The first is a kind of sister publication to ‘Blogging for Creatives’ which was published in 2012, but this time it’s Blogging for Writers. Naturally this is right up my street! But, like with the first book, there’s a heck of a lot of research to be done, experts to be contacted and images to be found, on top of the actual writing (which is the easy bit). And I now have just 8 weeks to deliver, so it’s full-on.

On the poetry front I’ve just started by own small poetry imprint, Telltale Press, mainly to publish my own short first pamphlet, but also (I hope) to do the same for other poets. Still working out the details, but my own pamphlet should be out within a few weeks. My poetry writing is a bit in the doldrums at the moment. But that’s OK, it’ll come back.

2) How does my work differ from others of its genre?

I suppose I need to answer this in regard to my commercial writing and poetry, separately. When I was writing essays at Uni many years ago, a tutor remarked ‘I like your clear, textbook style.’ That comment stayed with me and I’ve consciously tried to develop this ability over the years. As a result I’ve had a lot of success with copywriting – especially when it comes to putting the technical into plain English and empathising with the audience’s thought processes. It’s also helped me in devising and delivering training and mentoring. Let’s break it down, look at it another way, that sort of thing.

Poetry of course is another matter. If anything I have to fight against the instinct to explain, to set the scene…maybe that’s one reason why I enjoy it. Poetry feels like the ultimate challenge for a writer. Does my poetry differ from others? Probably not. Like many people, I can write competent poetry that very occasionally has a magical spark (together with a fair bit of stuff that has no merit at all). But there are so many wonderfully original and surprising poets out there, and I’ve got a long way to go before (or even if) I reach that standard. If anything I would say I probably need to let go more and not be so controlled by rational/analytic thoughts.

Commercial writing: I write about whatever interests me, but I suppose I fell into the blogging books from having been an internet marketer for so many years, since the 20th century actually! And before that I was a corporate marketer on the international rat run. I discovered the internet in 1997, learned HTML in 1998, did an MA in Digital Media in 1999 and reinvented myself as an internet bod.

Poetry: a combination of the usual things that inspire poets (life’s big questions) and a love of manipulating language. I love jigsaws, puzzles, sudoku… I enjoyed maths at school as much as English… I see poetry a little like a creative extension of all that. Like a lot of people I started writing poetry at school, but despite encouragement from lovely English teachers I was determined to think everything I wrote was crap. I still think this was probably true, but I wish I’d had the confidence of youth to at least give it a go. But it wasn’t until I was settled and contented and in my 40s that I decided to take poetry seriously. Suddenly there was a heck of a lot of reading to catch up on and it was (and still is!) a steep learning curve.

4) How does my writing process work?

I’m pretty organised. When it comes to commercial work I rely on spreadsheets, time and word count calculations, and to do lists. I enjoy filing and try to keep well on top of deadlines. I’ve never missed a deadline – I was one of those kids who even at university would always finish tasks well ahead of the due date, and I never ran out of time in exams.

With poetry, again I keep good records of submissions, but I admit I’m a bit ramshackle as regards keeping notes and writing down ideas. Many things fly away before I have a chance to nail them down. I get a bit frustrated when I do have the time to sit and write, and nothing at all worthwhile comes to mind. But again, that’s part of the challenge.

I go to workshops because I do find feedback valuable, and I don’t mind doing exercises and having writing prompts but I wouldn’t seek them out. I’ve rarely had any useful inspiration come from prompts or exercises. I have more luck if I just stop trying to write and go read instead. Reading fine poetry before going to sleep can work well for me. Part of me thinks if I read enough good stuff it will rub off on me somehow. When I do actually write something, it might go through many revisions over several months or even years before it’s published, but on the other hand I’ve had a few notable successes with pieces I’ve literally written in one sitting with very little editing. Bizarre.

Next Monday, please check out the following writers/bloggers and their answers…

Abegail Morley of The Poetry Shed
Abegail Morley’s first collection, How to Pour Madness into a Teacup was shortlisted for the Forward Prize Best First Collection. Snow Child (2011) and Eva and George: Sketches in Pen and Brush (2013) are published by Pindrop Press. She has a collection forthcoming from Eyewear Publishing and is co-founder of EKPHRASIS.

Cathy Bramley
Cathy Bramley is a writer of romantic comedy. She lives in Nottingham with her family and is a fan of Polish cherry vodka, chocolate brazils and Marian Keyes novels. Her debut, Conditional Love achieved a little ‘best-seller’ flag from Amazon and her next novel will be published in April. You can usually find her wasting time on Twitter @CathyBramley or on Facebook. 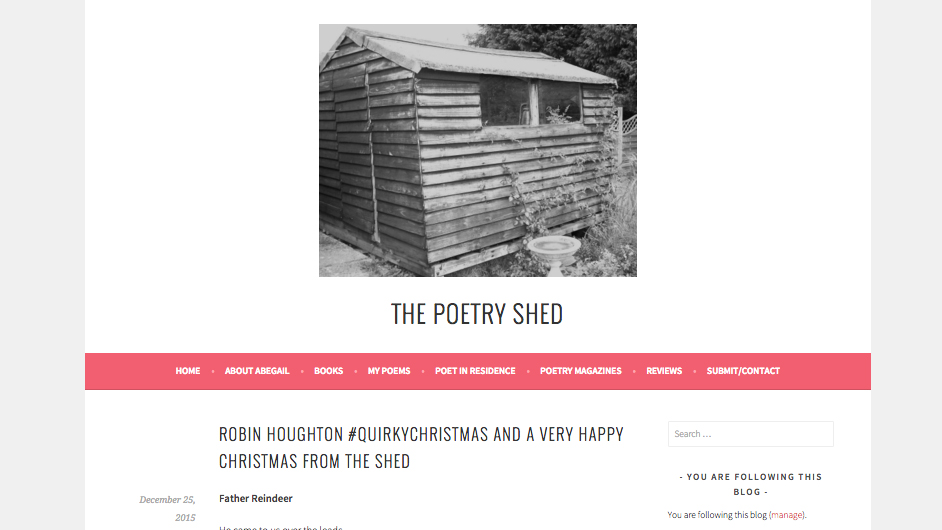 Pingback: The “Writing Process” Blog Tour | So Many Tangent on February 24, 2014