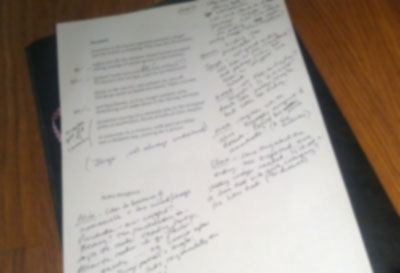 Notes from a workshop

Last week I was lacking inspiration, part due to work commitments and then a 3-day headache – ugh – so it was a pleasure to once more find myself in the interesting ambience of the Lewes Bus Station building for another workshop with Mimi Khalvati and the group of serious poets I seem to have inveigled myself into. (Can one ‘inveigle oneself?’ Hmm).

Sometimes in these situations I have a feeling of ‘this is not real’. I suppose it’s the usual ‘I’m an imposter and any minute now I’m going to be found out’ anxiety that I gather many women (especially) suffer from. A bit like jobs I’ve had in the past when I’ve sat in meetings and had the distinct sensation of acting like I know why I’m there, like I know what’s going on and my presence is making a difference. It’s not exactly the fear of being unmasked, like that scene in ‘Working Girl’ when Melanie Griffith is accused of being a fake and leaves the boardroom saying ‘sorry! sorry!’ It is something like that. But it also feels like I’m in a play, or someone else’s dream. There’s something fragile about the situation, grounded in nothing much. It’s like meeting a childhood hero in your kitchen or office. The strange mix of something that’s at once real and unreal. The feeling that it might be you who’s actually experiencing this or it might be something you’re dreaming or watching happen to someone else. And then wondering if there’s any difference.

Anyway, sorry for the cod-philosophical moment there – back to business – it’s very odd how sometimes in workshops there emerges a kind of theme. I remember a previous session where there were a lot of poems about water. And another where houses featured prominently. This week, dreams and fairytales came up quite a few times.

So in no particular order, here were some of Mimi’s general observations/comments that I made a note of … hope they’re of use /interesting.