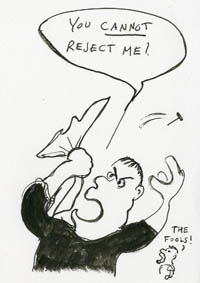 Anatomy of a rejection

It was a long time coming (4 months) but Under the Radar finally emailed me a standard ‘not this time’ (or possibly ever?) note the other day, which prompted me (of course) to look at the offending poems to see if there’s mileage in sending them out again as is, or whether they merit reviewing.

I don’t know about you, but I sometimes look at poems when they’re sent back and think ‘well they were rubbish anyway’, but that might be psychological – especially when it’s hard copies in the post and they look like they’re untouched by human hands and probably went straight into the SAE within mllliseconds (as opposed to read, re-read and ummed and ahhed over) – isn’t it silly the games we play with ourselves?

This time, I’m not yet sure which ones I shall re-submit, so I won’t post the actual poems here, but I thought it would be interesting to do a little ‘hard looking’ at each one and share the process with you.

1) The first was one I was quite pleased with, even after workshopping in a Brendan Cleary session some while back. I did make some changes though, and my possibly ‘too clever’ syllabic scheme (which was supposed to tie in with the theme but perhaps required too much obscure knowledge of South American dance styles) maybe sank in its own merengue. But I think the premise is good, so I will persist with this one, perhaps send straight back out elsewhere.

2) Poem number two has been knocking about for a while and is based on a dream sequence that seemed fun at the time but I know the old ‘dream sequence’ thing is a bit of cliche. There’s a lot here I still like, but perhaps it’s a bit over-egging one decent idea, like an Andrew Lloyd Webber musical, until you kind of see what’s coming. I do tend to go for cute endings and must curb the tendency for it to be too pat. This poem was first started about 18 months ago – it’s done the rounds and gone through various iterations. So maybe needs resting.

3) Quite a recent one this, and I think it was the best of the bunch. I don’t think I’ve tried it anywhere else. It’s in my favourite form, couplets, but I wonder if there’s just too much going on and  it needs simplifying. Again, I still like the premise, it’s unusual. So worth looking at the language and eliminating the extra weight, I think. Must not Try Too Hard.

4) Last but (not?) least: this one was always risky – a nursery-rhyme theme in Shakespearean sonnet form – can you say ‘rejection waiting to happen’? Actually though I think it only needs a small amount of close attention to make it decent. There are a couple of dodgy lines where the form shouts out and that’s not good. But a lot of good things. So not worth giving up on yet.

As always, I’ll keep you posted if any of these find a home elsewhere, with or without revisions!