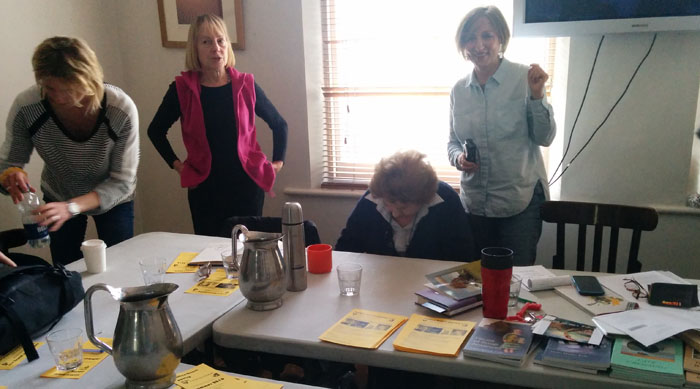 Last weekend I was at the Troubadour in London on a Sunday afternoon for one of Anne-Marie Fyfe’s themed writing workshops. It was intense without feeling like hard work – I felt I’d been challenged and came away with a number of useful seedlings of ideas that may one day make their way into poems or other creative writing. Which is, I think, the best possible result.

Writing workshops are a funny thing – as a participant, I often quickly get irritated or restless when invited to do a piece of ‘free writing’ or ‘imagine you’re five years old and you’ve just seen your first elephant’ or whatever. More often than not, nothing comes into my head, or else I just write reams of nonsense which just makes my hand ache. If it goes on for too long I look around at everyone else furiously writing and feel a bit resentful that I’m wasting precious writing time trying to write about ‘a time in my life when… [insert insignificant episode here].’ And then I get fed up with the silences when the open questions come, and get annoyed at those who never say anything.

I realise this all sounds very snitty and you’re right to be thinking ‘well don’t go to any bloody writing workshops then!’ But I’m ever the optimist, so I do still occasionally put myself through it. And when I’ve had a really good experience I want to tell people about it.

There are a number of reasons why Anne-Marie’s sessions are so good. The time is well-organised and the sessions run to enough of a pattern to make regular participants know what to expect. Exercises are open enough to allow for individual interpretation but focused enough to pull you into the task. And they come thick and fast – so if one exercise doesn’t resonate you don’t have time to start wishing you were elsewhere, because something different is then sprung on you. As well as her considerable experience and sense of fun, Anne-Marie brings a big range of material to trigger thoughts – images, books, poems, even music – and has a wonderfully inclusive manner. There is a good chunk of time in which you are left alone to work something up. And everyone is encouraged (gently but firmly!) to take part – in reading things aloud, talking about their responses to the exercises or the source material and commenting on other people’s work.

It’s probably no coincidence that these workshops seem to attract a lot of ‘serious’ poets, often from quite a distance – and serious poets want to be in workshops with people they perceive to be at least as serious about it as they are. So the whole thing becomes a virtuous circle.

Anne-Marie’s Troubadour workshops are always full and as result she tends to repeat them later in the season. The one I went to, on the theme of ‘Invisible Cities’, is running again next Sunday 29th May, and I would highly recommend it – £28 well spent.