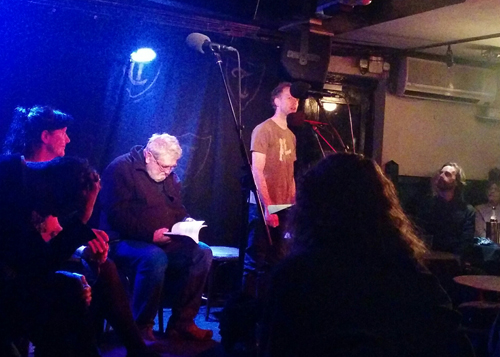 Coffee-House Poetry at the Troubadour

Published by Robin Houghton on November 29, 2016

Getting to and from London from the south coast is ten times harder than it used to be these days, as the rail company (which has a monopoly) has been running an unsatisfactory service for the last however many months – actually it could be a year or more. Two-day strikes pop up every three weeks or so, and that’s on top of the already reduced timetable. Trains are regularly cancelled at the last minute, even halfway through journeys. As a result, every time the train you’re on actually leaves a station you breathe a sigh of relief that it hasn’t terminated there. Factor in the cold and dark of night, and the prospect of going anywhere by train is rather stressful. And I have a choice at least – the situation for those millions of people who have to travel by Southern Rail every day for work must be unbearable.

So it was a joy to actually make it to the Troubadour last night for Coffee-House Poetry. The second half was ‘What we should have said’, a regular feature described by Anne-Marie Fyfe in the promotional email as “three very different poets, a musician & a proverbial wit, thrust & parry with poetic, harmonic & philosophic contributions, comical, tragical, pastoral & beyond”. It was a wonderful spectacle, a really impactful way of presenting poetry, with Martina Evans (LOVED her work!), the excellent Luke Kennard, US poet Louis Jenkins and ‘What we should have said’ impresario Stuart Silver bouncing off each others’ words, linked together by Marios Takoushis’ jazzy/soulful/arthouse improvisations on the keyboard. The top-class sound management at the Troubadour cafe makes a huge difference here – it’s so noticeable how a reliable and effective sound system allows the performers and the poetry to shine, and the audience to relax and take it in.

In the first half we heard from 21 of the contributors to Live Canon’s 154 Anthology, each reading their response to a Shakespeare sonnet, and a few words about it. I was very proud to be a part of this book and the range of responses and poet voices is fascinating. The book does include ALL of Shakespeare’s sonnets, as well as the ‘response’ poems, so it makes for a very nice (ahem!) Christmas present, even for someone with no special interest in contemporary poetry.