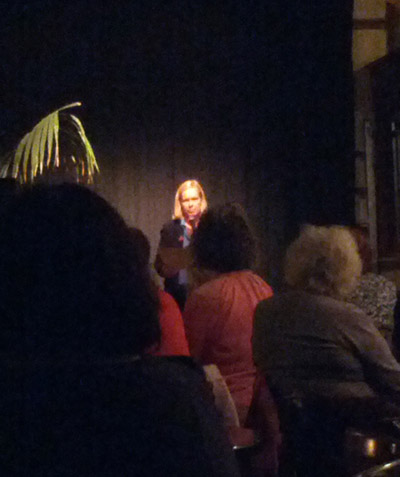 Published by Robin Houghton on September 28, 2012

A very good evening yesterday at the Redroaster in Brighton: always lovely to hear Charlotte Gann reading, including some of the goodies familiar to me from her pamphlet ‘The Long Woman’ and some new poems I’d had the privilege of seeing ‘in development’. And she looks so striking under the lights! The photo is taken rather at a distance, sorry about that – but I opted for comfort over the benefits of being close to the action – the leather sofa at the back was just too tempting to ignore.

Clare Best explained her connection with the cause and read from her collection ‘Excisions’ – and just as at the launch of it at the Needlewriters there was such a charged silence while she read. Very moving. Plus Clare has such a calm, expressive voice – actually I could imagine her taking over from Harriet Cass at Radio 4. Must suggest it!

During the second half Kim Lasky spoke about her work with women undergoing treatment for breast cancer, and we heard poetry written by three of them, one of whom read her own material and told us she’d never written anything before this – testimony to the power of creative writing therapy I guess.

During the interval I had an interesting conversation with John Davies from Pighog Press, who said he’d heard my name mentioned in various places – ooh, I thought, that sounds promising – “what, you mean to do with poetry..?” “Um, no….” Oh well! At least I’m on the radar, sort of!

Very nice also to catch up with Julia ahead of our both reading at the Needlewriters next week – we swapped tactics although didn’t get as far as discussing outfits. He he!