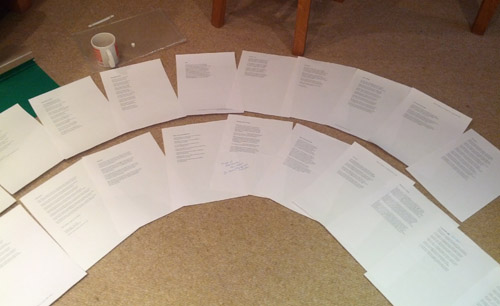 Putting together a collection of poems is proving to be harder than I ever expected. For a while now I’ve had a number of poems on a theme, which originally I dared to call ‘a pamphlet.’ I tried it on a few pamphlet comps: a couple of long-listings came of it, but basically nothing much.

So I looked very hard at the poems. Some were definitely stronger than others. Some I ditched entirely, some I took to workshops, some I worked on, and continue to do so. I sent them out as individual poems to a few places and it took a while but eventually a few of them have now been taken by magazines. But no-one has taken more than one, even though I’m now sending several as a ‘sequence’, or at least calling them ‘part of a sequence.’ I still believe very strongly in the sequence (or pamphlet, if that’s how it ends up) and perhaps I have more poems to write which may find their way in. But only a few of them ‘stand alone’ out of context. On the other hand, if I cut some poems and settle for a sequence, little else that I’ve written sits logically with it to make even a pamphlet. I feel like I have a lot of individual poems, but they have nothing in common with each other.

Showing groups of poems to various people in recent months has been difficult and nerve-wracking – feedback is mixed, and I feel knocked back, much more so than the feeling you get when a magazine submission is rejected, which I’m quite used to now. I’m very grateful for the feedback, especially if it’s offered as a favour, but asking someone to critique a collection of poems is very different from workshopping an individual poem. I find it impossible to link general comments to what’s not working in specific poems. I’ve also finally come to the conclusion that I struggle with written criticism, particularly if I’ve not actually met the person. You have no chance to interrogate the issue, get to the bottom of it – no dialogue, no chance to say ‘oh yes I see what you mean, so this doesn’t work because….if I do this, then…’ This has been an issue for me when I’ve taken part in online courses, for example.

I’ve thought for a long time what I need is a mentor, but as a poet friend pointed out to me recently, that may just be a cop-out. No-one has the magic answer to all this, or can tell me ‘what to do’ – or rather, they can, but is there ever ‘right’ advice? I need to work more on my writing, read more closely, and figure it out for myself.

I suppose I am learning though – for example, I’m learning which poems I feel strongly about, and which I can let go. Also, by looking endlessly at ways of ordering or re-ordering poems, and looking for possible links, I’ve actually identified a Key Poem – one which I used to think was nothing special, almost lightweight, fun in performance but no big deal. It’s a poem I’ve always struggled to explain to people but I can see now that it introduces overarching themes, and although it was OK as a standalone poem it can contribute more, has more to say, as part of a sequence.

I’m very interested to hear how others have tackled these kinds of issues, and any ideas of how to move forward, what’s worked for you. Do share, if you feel able to. Thanks.