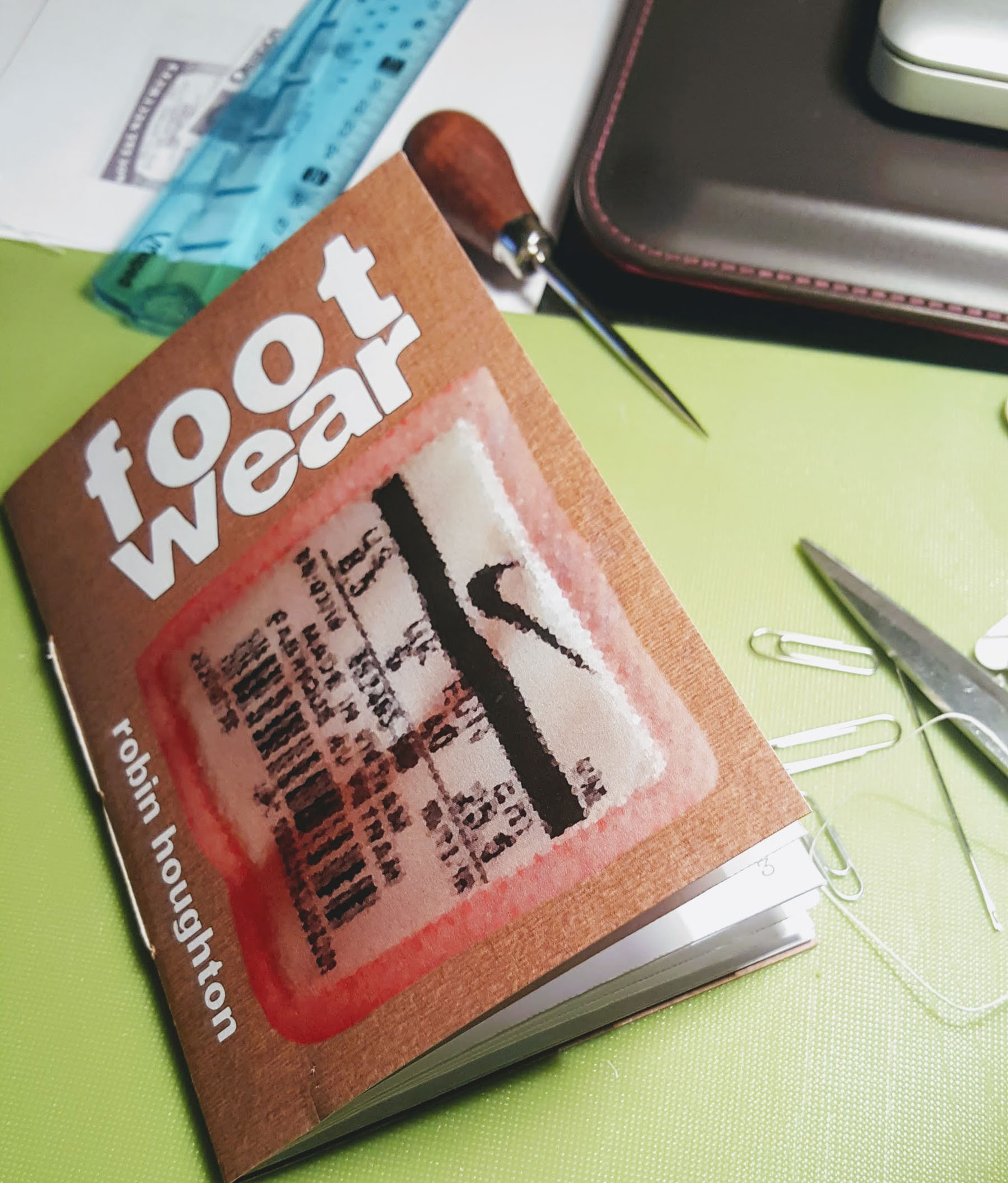 Published by Robin Houghton on November 15, 2017

So there I was with a handful of poems from my ill-fated ‘Business Class’ collection that couldn’t find a home. What to do? I started thinking about the themes: workplace tensions, multicultural office environments, illicit relationships, anomie…and shoes! Why hadn’t I thought of it before? I was working in the sports shoe industry. And I realised shoes have been a theme in my life – from doodling enormous platform boots all over my rough book at school, to my first job in a shoe shop, to persuading my bosses at Nike that netball was a viable sport and players needed netball shoes.

I picked over what I had, chose a few unpublished poems and adapted a couple that had been published, added in a few new shoe-themed poems, and the little collection made a good narrative arc.

Shoes are made by hand, so why not the pamphlet?

I wanted this to be a small collection of poem ‘vignettes’, semi-autobiographical, related to my life in shoes, in limited edition. I wanted each poem to be accompanied by a photo. I also wanted to make the pamphlets by hand, as much as possible – not hand written and not handmade paper (would be nice, but very expensive) –  but hand-bound and finished. The point is that the trainers we wear are by and large handmade – from the pattern cutting to the stitching, dyeing, glueing and finishing – by hundreds of assembly-line workers in the far east, and it’s skilled work. The least I could do, to pay homage to that process, was to make the pamphlets myself.

A bit of info for stationery geeks

My plan was to print the inner pages on my office printer. I was excited to find A5 paper for sale online, and I ordered it in 170gsm, a bit heavier than normal printer paper. I thought perhaps there’d be less chance of a printer jam and the heavier weight would look classier. I hadn’t really considered the thickness of the finished article. But with only twenty pages it turned out fine in the end. Similarly, I had the covers printed in 380 mic pulp, which turned out quite thick – but I don’t regret it. I had no trouble folding the pages in the end because I had a lovely bit of kit called a bone folder.

A noob at numbering

The first challenge was to print the pages in the right order, with the correct back-to-back pagination. This proved harder than I thought and I wasted quite a few sheets of paper in my frustration! 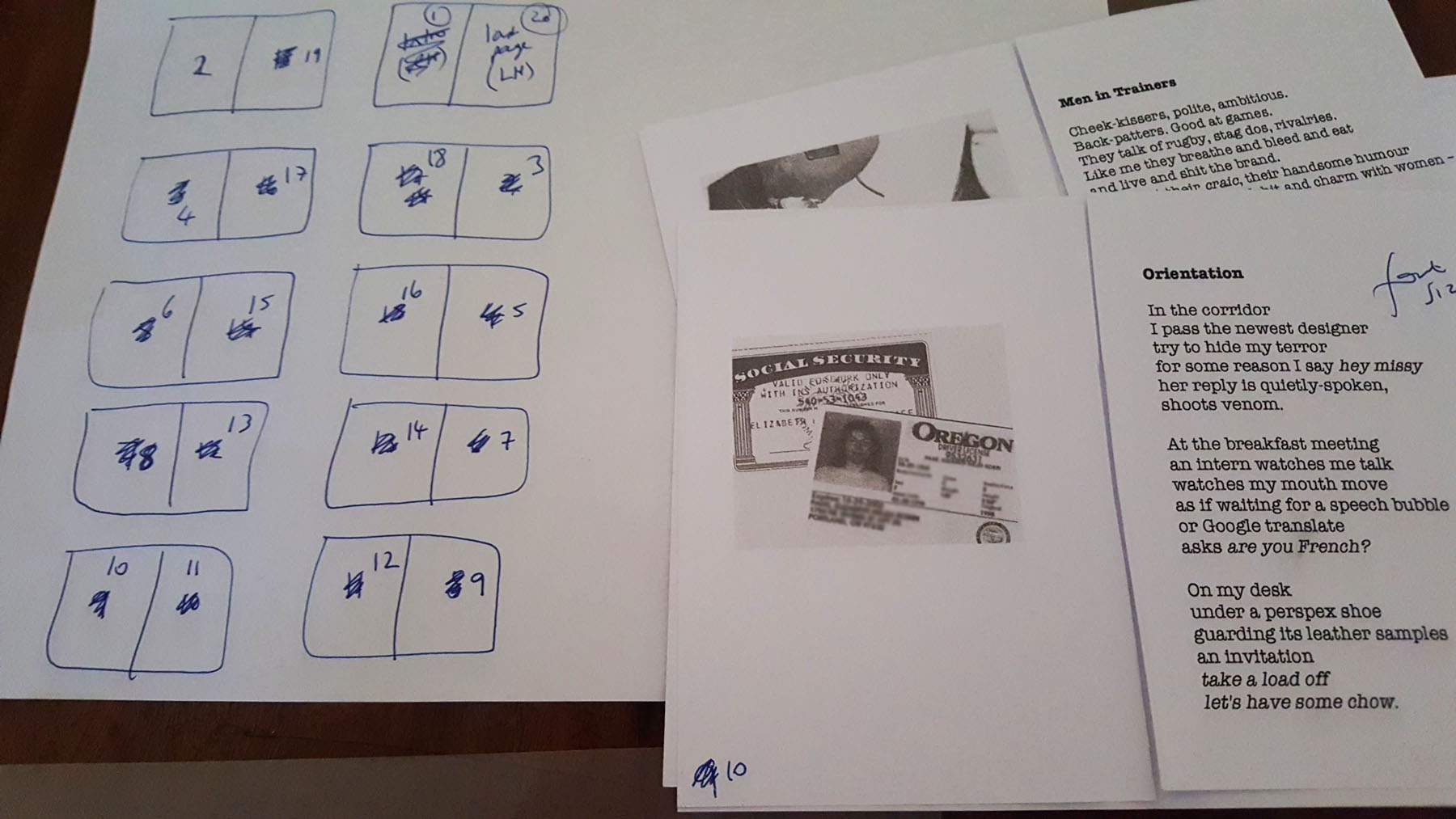 Anyway I succeeded in making a mockup, glued together, which became my blueprint. There then followed the sloooow process of printing the pages. Ten at a time invariably meant a misfeed of the paper, which when it was side two being printed meant reprinting all over again both sides. Ugh.

Meanwhile I created a cover design using a photo of the tongue label from my trainers and a background image suggesting a cardboard box. This I had printed at an online printers. 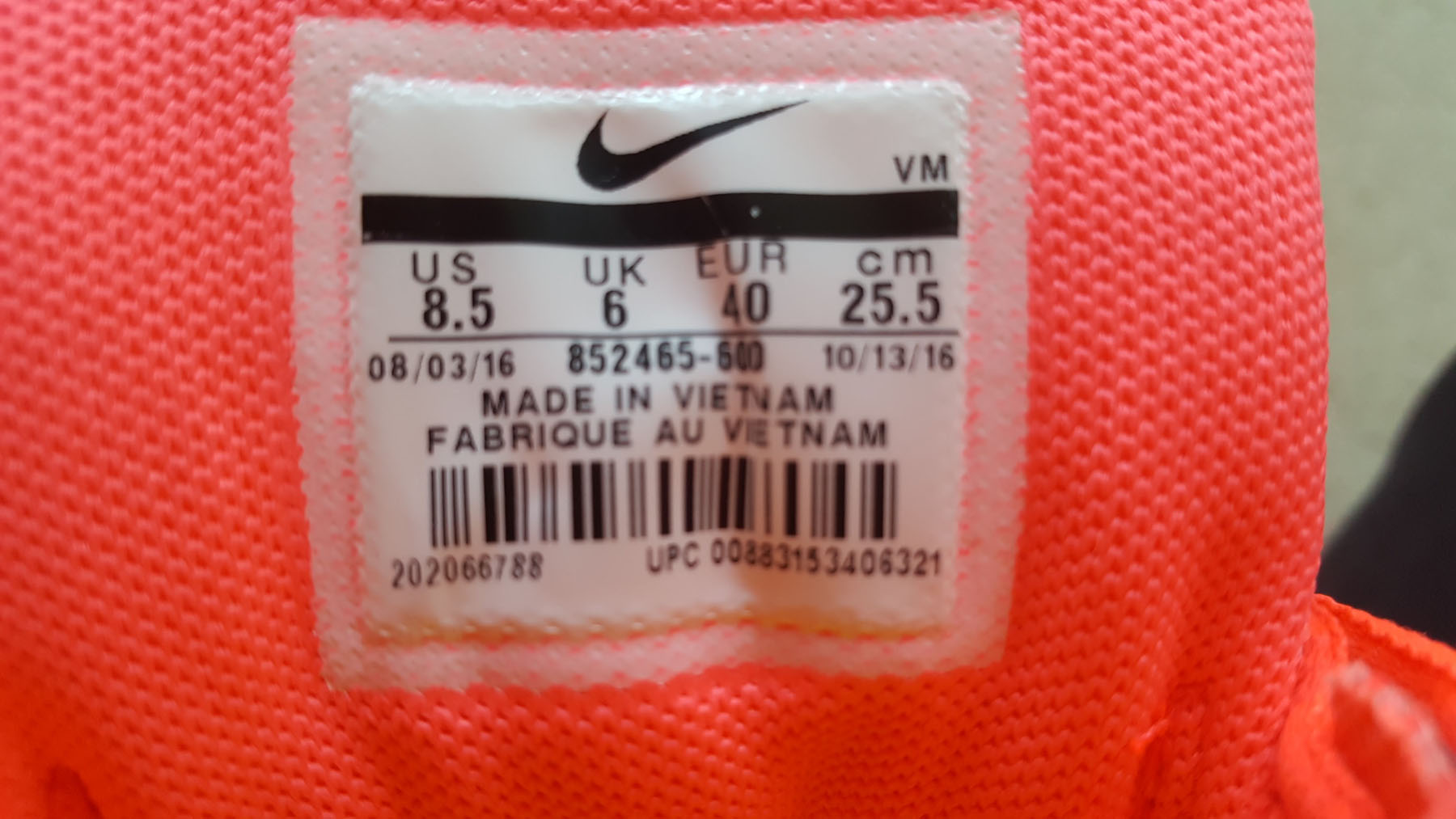 I was looking forward to binding the pamphlets. I bought a ‘bookbinding starter pack’ from a wonderful shop based in the Orkneys called the Vintage Paper Company,  and followed their instructions for how to make the simplest of bindings. 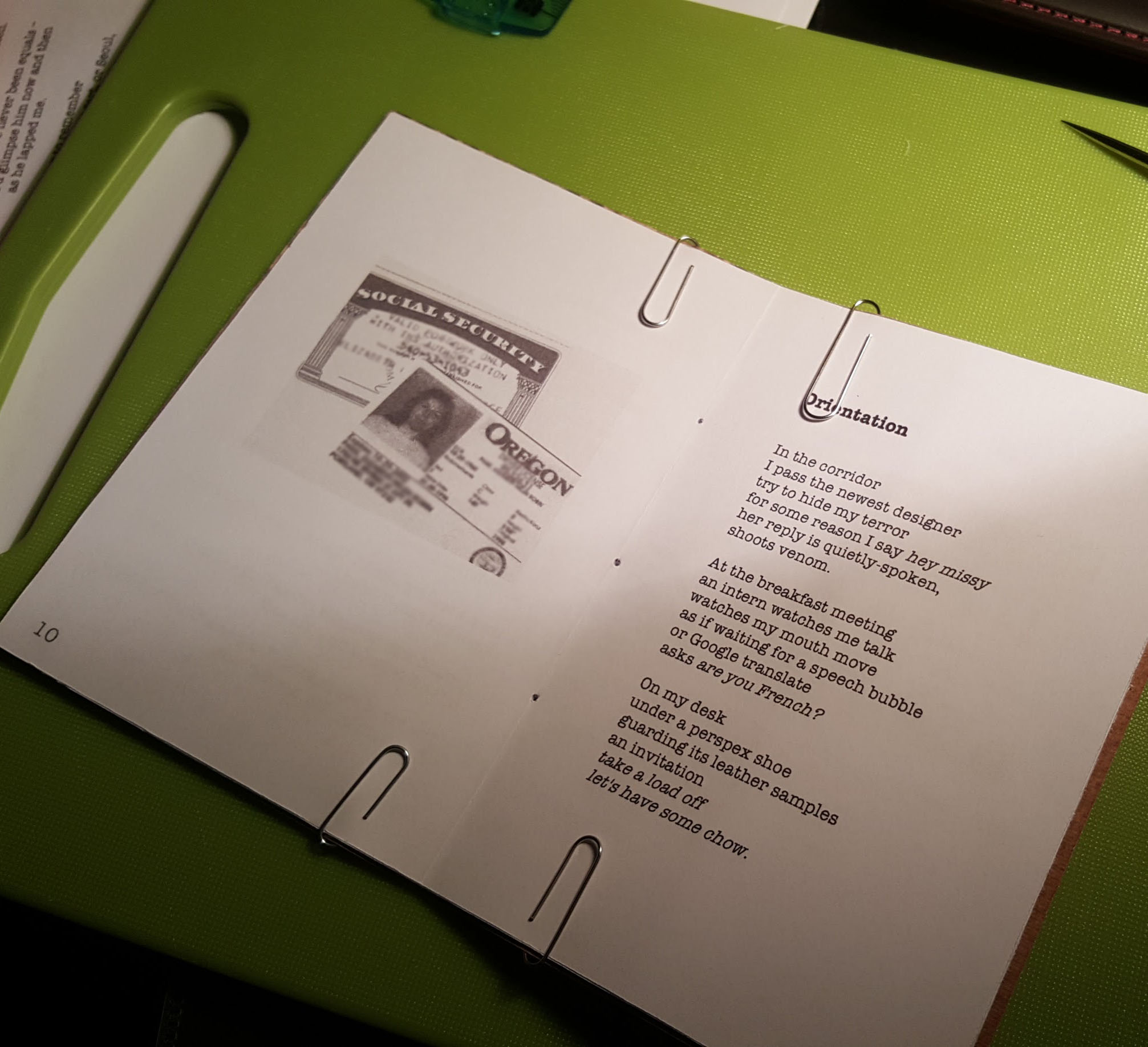 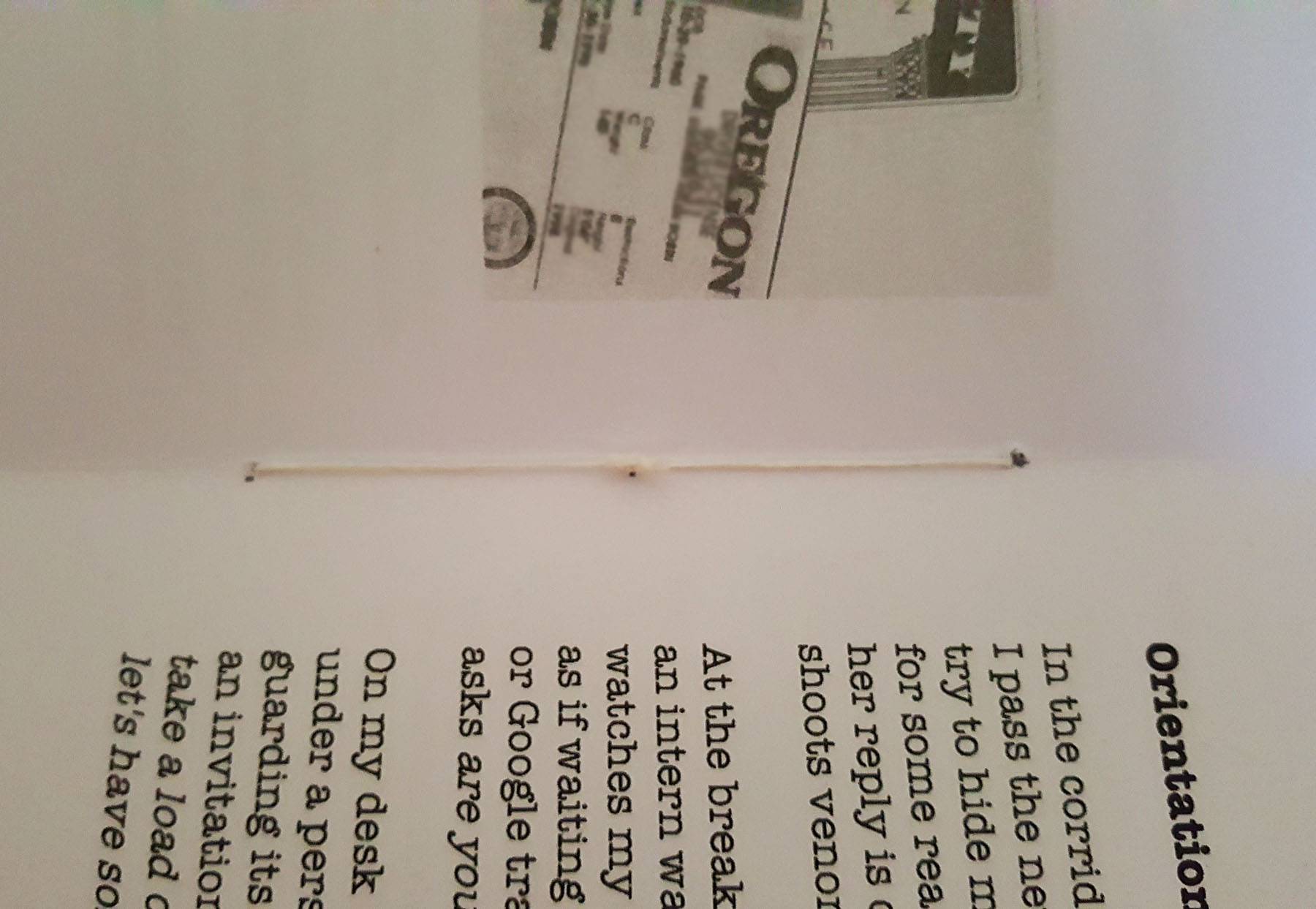 That was it! Or so I thought… I realised then that the pages protruded outside the cover. They would need trimming. After trying unsuccessfully to trim a thickness of 5 sheets using a blade, I realised I’d have to do it singly.

In the end I got quite good at it, although there were a few rough edges I thought that was fine – all part of the quirkiness/individuality of each pamphlet. 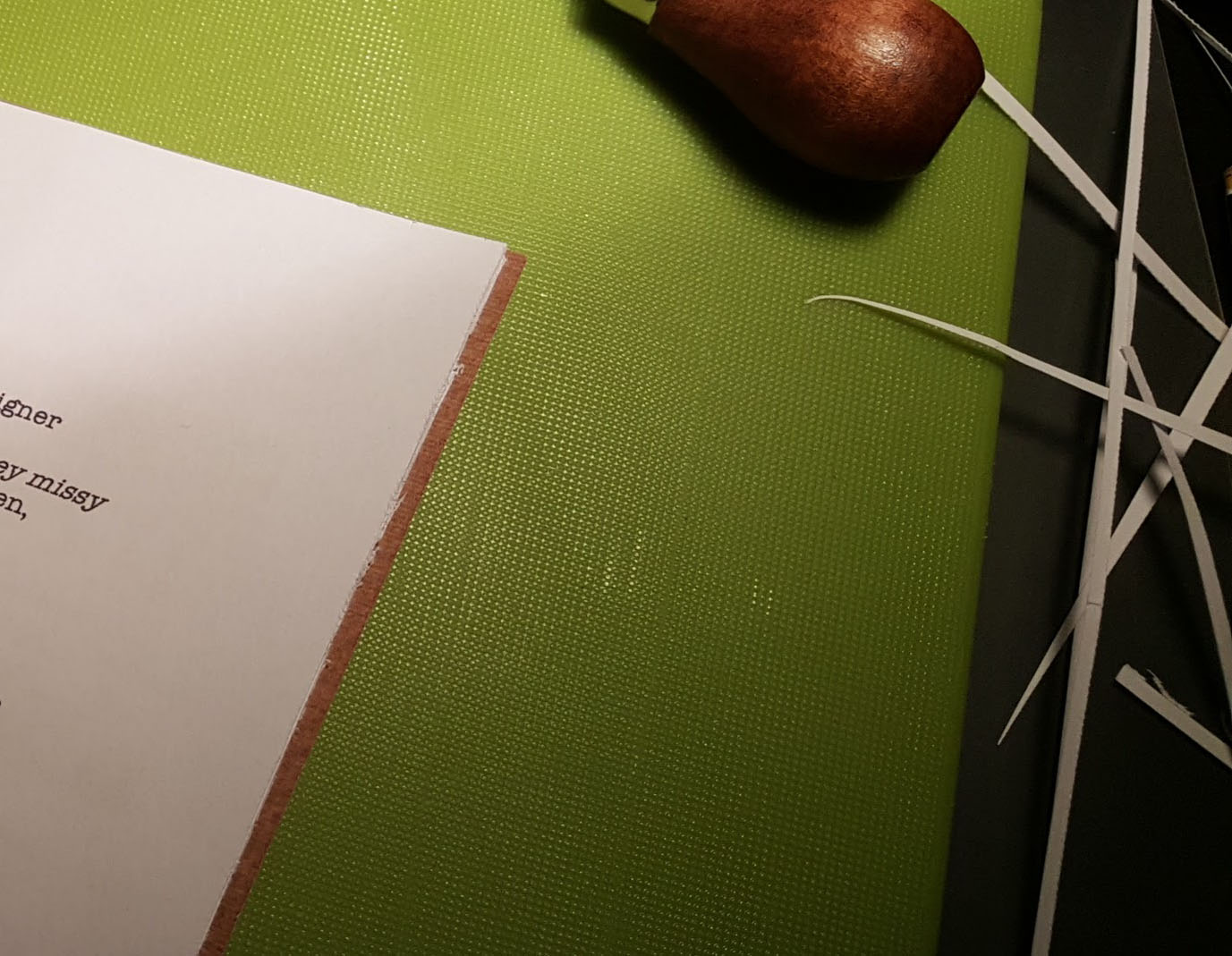 The final product is lovely, if I say so myself! I’ve only made ten so far, and there’s going to be a limit of fifty. My plan is to sell them at readings.

In fact I made my first sales on Monday evening in Winchester – more about that in the next post! 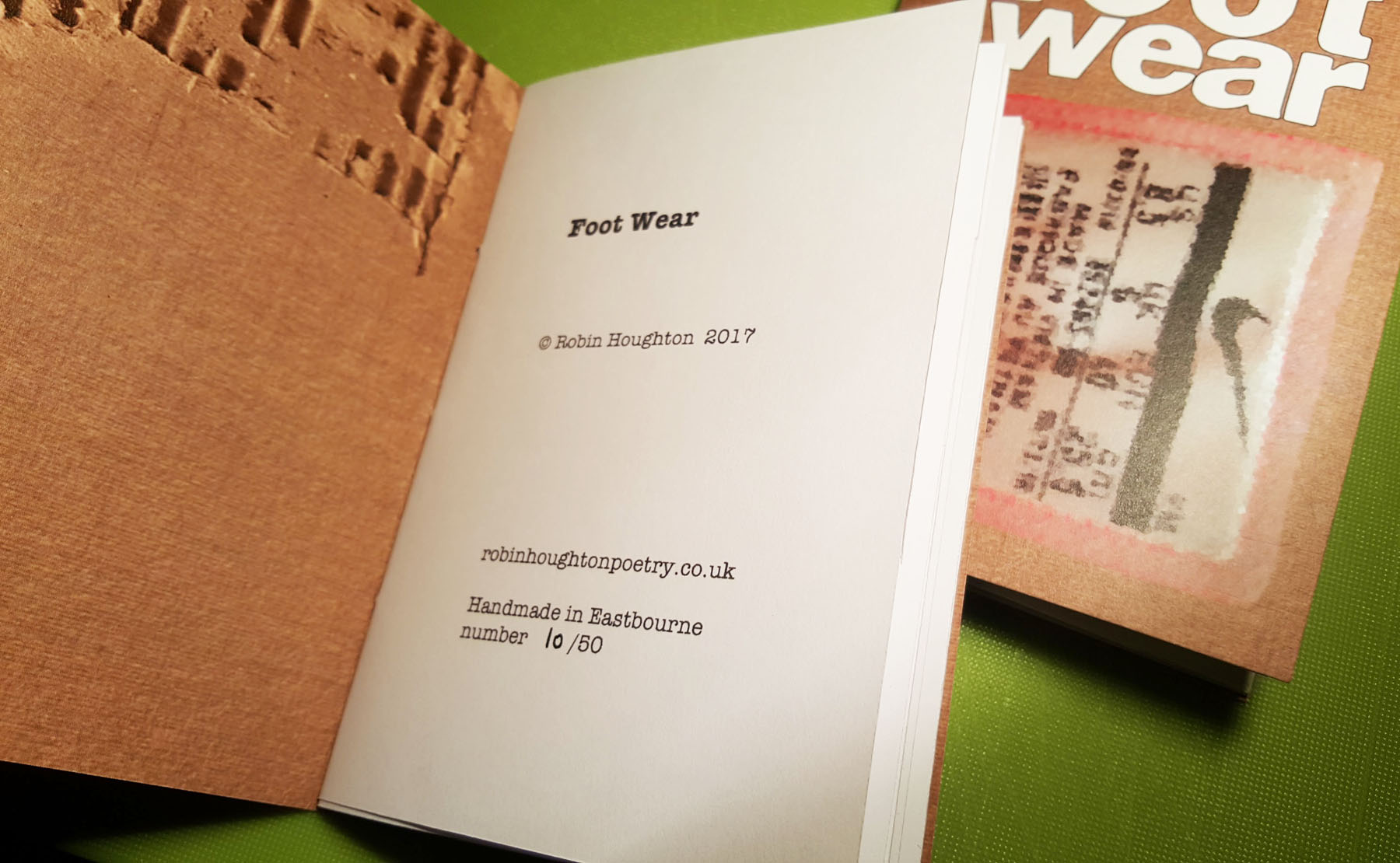