Published by Robin Houghton on November 26, 2018 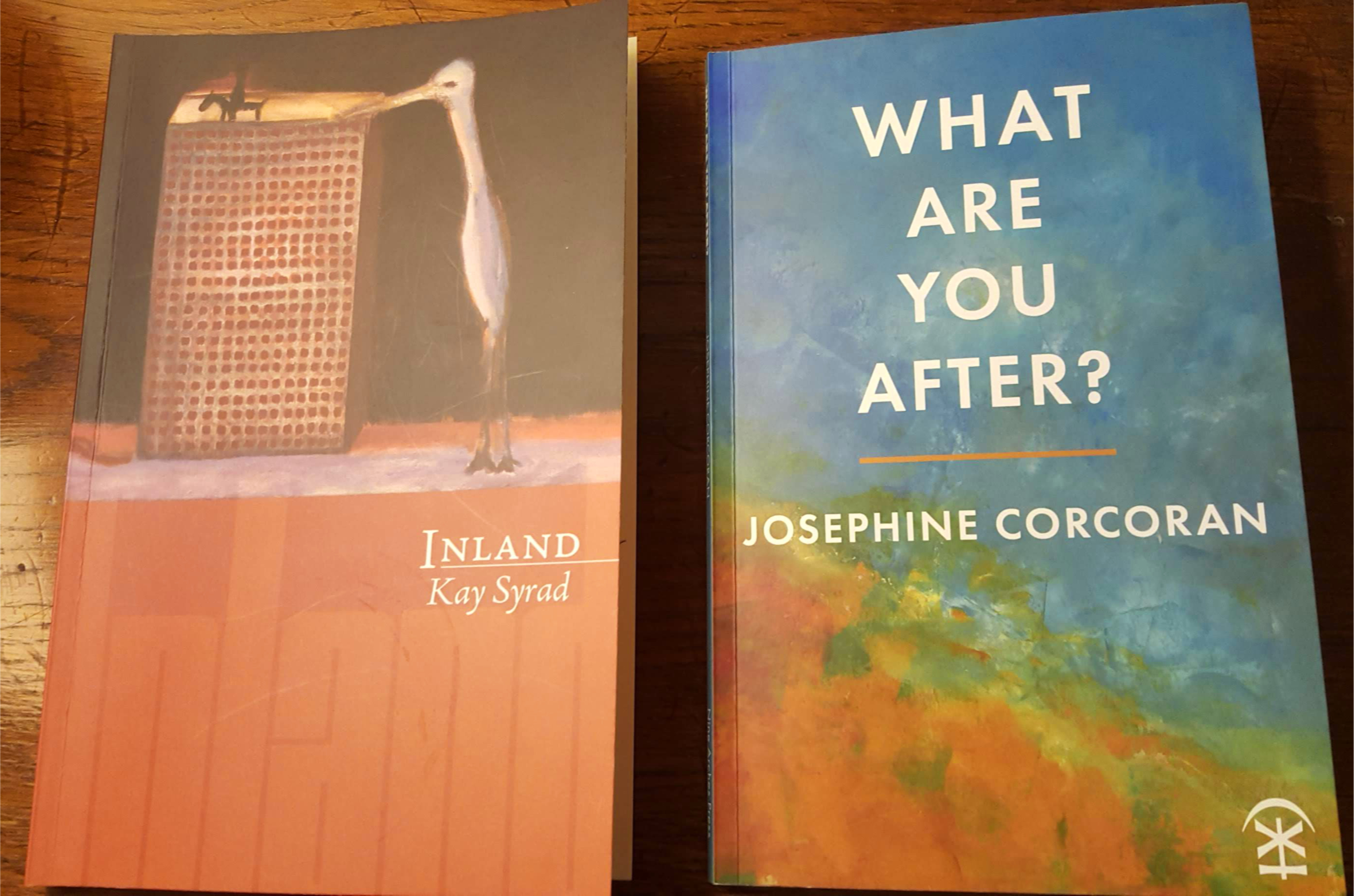 A couple of brief reviews of collections I’ve been reading:

There’s nothing predictable or familiar in this collection. Just when you feel you’re getting your feet under the table suddenly the table is gone, and the ground beneath, and your feet too. Just two poems in we encounter ‘Transcript’, a testimony with gestures-as-stage-directions which is stranger than the sum of its parts – a characteristic we meet intermittently throughout the book. The poet’s feeling for moss is visited and revisited, from ‘Nomenclature’ (‘bird’s -claw beard-moss / oblique-mouthed beardless-moss’) which ends with the line ‘ah – our fresh fingertips’ through to the last poem ‘Listening to moss’ (‘I take a blindfold, lie down and listen/ to a half-globe of star-green star-moss’). I came away with a sense of yearning, of sadness for something almost grasped but not entirely, almost said but not exactly (‘Situation of Secrecy’, ‘Scatter my bright feathered heart’, ‘Plaint’). The title poem ‘Inland’ takes the reader on a meditation around a few repeated words (gulls, grief, words, speak, heart, ship, inland) coming together and knocking against each other slowly towards a conclusion ‘gulls and men / follow the white island of the heart / all inlaid in the heart / grief in the heart / in white / I find white in the heart / inlaid’. I particularly loved Kay’s poem titles – more often than not intriguing, inventive and quirky. I also warmed to the more surreal poems, maybe because I enjoyed the fun of decoding them (or just scratching my head), much as the poet ‘translates’ a ‘secret message on a long fence’ in ‘Afternoon out’, but it’s also the magical mystery that Kay creates, sometimes as delicate as gossamer – you almost don’t want to pick it up for fear of breaking the magic.

Josephine Corcoran’s first collection draws upon memories (real, imagined or reimagined) to examine issues of identity, class, family and love. From the grief of miscarriage to a relationship mapped onto a litany of medical interventions (‘In 24 years, we’ve lost count / of all the body parts we’ve seen’ – ‘Love in the time of hospital visits’) the autobiographical content has an quiet honesty. Josephine situates the reader through her use of time-specific references, figures of speech period detail, popular culture and current affairs – the ‘5 o’clock bus’ from school, headrests ‘dimpled from Brylcreemed heads’. Stephen Lawrence, food banks and drones rub along with references to margarine, economy ham and the Three Degrees. Movie scenes and film references proliferate, as do dreams. The poet demonstrates great versatility and range, from the polemic of poems such as “Police Say Sorry” to the quieter lyric pieces and a wonderful pantoum ‘Fallen asleep by a Christmas Tree on New Year’s Eve’. Another trope weaving its way throughout is telephones and phone calls, featuring often as signifiers for communication (or lack of), misunderstanding, cross purposes and the gulfs between different times, ages, cultures and beliefs. Poems have been carefully sequenced, cross-referencing each other neatly. It makes sense, but if anything, I would quite have liked fewer instances of poems obviously following on from the previous one, for example ‘Gavrilo’ following ‘History Lesson’ – to makes things a bit more oblique for the reader. A very small quibble. One of my favourite poems in the collection, ‘In town for a funeral, we drive past our old house and see it is for sale’ is also possibly the longest. It’s a seemingly-simple but complex poem that invites many re-readings, yet still has plenty of secrets to give up. I can imagine Josephine might be already writing more of these longer poems. Watch out for the next collection.

I was fortunate to hear Josephine reading at Swindon Poetry Festival recently. Here is ‘Exquisite Corpse’: