I’m expecting my granddaughter to be offered a book deal any time now. Last week she gave me a card with a question written on it, somewhat out of the blue, and I wasn’t sure how to answer, so I did what any diligent nana does, I asked the Twittersphere: 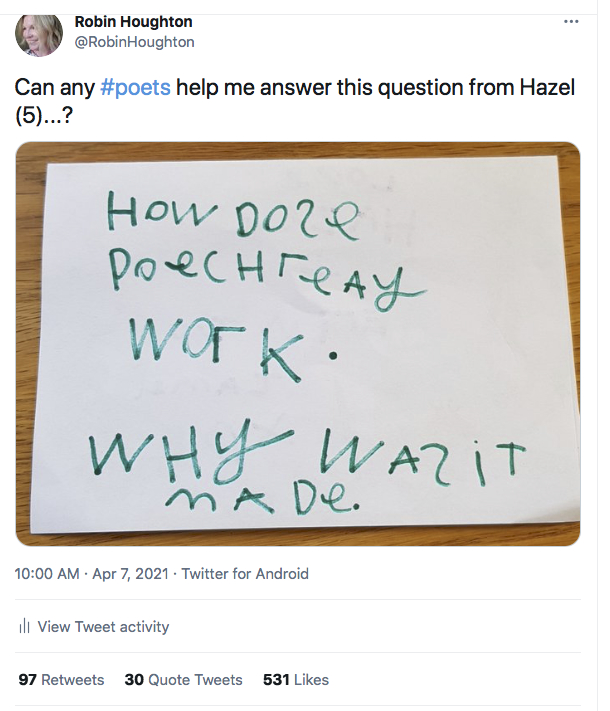 I was stunned by how much it was shared and liked, to be honest. Within a couple of days it had had over 100,000 impressions and nearly 10,000 ‘engagements’. But most of all I was touched by the replies. People really took time to answer helpfully, creatively and encouragingly. Someone even said they had thought about it all night before replying. Many of the replies were addressed to Hazel by name, which was lovely. Some suggested she had already written a poem right here. And the spelling of ‘poechreay’ went down particularly well (some read it as ‘patriarchy’ which was quite funny, another said she thought it said ‘peach tree’). Some people wrote their replies as poems. If you want to read them you can see the replies here.

Hazel is of course still only five, and both she and her mum are fairly nonplussed by it all. But I’ve been thinking about compiling the replies (there have been 69 so far and they’re still trickling in) in a little book that I can give her, perhaps when she’s a little bit older and can appreciate the wonder of it. I know it’s the sort of thing that I would have been amazed at if it had happened to me, but almost certainly not at the time.

I hope I’ve managed to thank everyone who replied. It’s the sort of thing that reminds me that lovely things do still happen on Twitter, and why I’m still there after fourteen years.