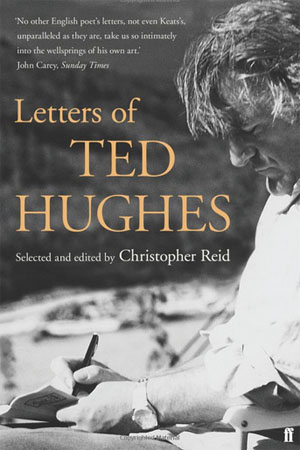 Published by Robin Houghton on January 20, 2013

It is now 1974. At least, that’s how far I have got with Ted Hughes’ letters, through which I’m getting a stronger impression of him than I think I’ve ever got from another source. Perhaps that’s not surprising, as he valued his privacy. And in the letters, there’s a clear sense of his growing frustration at how journalists, commentators and Plath biographers were representing his life.

Weird to think that in 1974 (or thereabouts) I was slouching my way through Dr Upadhayay’s English lessons, reading ‘View of a Pig’ and not even giving a thought to who the poet was, assuming he was long dead rather than a man of forty-something very much in the land of the living and with a daughter the same age as me.

As you might expect in the book there are letters to friends, publishers, other writers and family, sometimes talking (or not talking) about the same events. From about 1971 these included letters to his children. In a particularly charming one of November 1973 Hughes wrote to his daughter Frieda at boarding school, giving her advice for an English project she’s clearly asked him about. It’s a wonderful letter, bursting with life, full of detailed advice, fun and enthusiasm. He tells her firstly to seek out a copy of PLUTARCH’S LIVES (his capitals, and underlined three times): “While telling about Antony, Plutarch tells all about Cleopatra. You must read that. It’s quite short. In the same book, there’s also a life of Julius Caesar, but in that Plutarch gives only a couple of paragraphs to Cleopatra. But you must read those 2 paragraphs.”

Then there are his tips for writing up her material as a play or screenplay: “break up the story into scenes. As many as you like. You can write the scenes as you like – as you go along – in any order – you can fit them together at the end. If you write it as a film you can add bits all over the place. Describe lilies on the Nile. Caesar shooting a hippopotamus etc.” By the time I’d finished this letter I was ready to go find ‘Plutarch’s Lives’ and write a play myself. It all sounded so brilliant.