The sun was shining, it was a great day for a drive and even the M25 was a breeze. So my trip yesterday to Swindon was relaxing from the start. Actually I say ‘Swindon’ but the workshop was at the Richard Jefferies Museum which turned out to be a short hop from the M4, so I didn’t see anything of Swindon itself. But by the end of the day I had a clear picture of how the literary scene and poetry in particular is evidently thriving here.

There were sixteen of us in a cosy low-celiinged room, George in the comfy armchair and the rest of us fanning outwards in a kind of how-well-you-know-George pecking order, with copious amounts of tea and biscuits generously supplied by the lovely Hilda Sheehan of BlueGate Poets, our host for the day.

An interesting array of poets – I had probably come the furthest in terms of miles but many had travelled an hour or so, so clearly George Szirtes was a big draw. It was fun to get off of my usual patch, and always intriguing to ‘infiltrate’ a different poetry scene. Most exciting of course was finally meeting Josephine Corcoran, who gamely allowed me to take a snap of us on my phone (I think she came off better than me!)

The theme for the day was ‘form’ – we explored some of the elements that make up a formal poem – not specific forms (although we were asked to write a sonnet in the afternoon) but rather rhythm & metre, rhyme, length and so forth. George made the point early on that form isn’t just to do with the shape of a poem, it’s also voice – voice changes according the context, (which I guess is true of all kinds of formal writing, for example the language, the voice of a legal document versus a love letter versus a school report. In fact I started thinking about the word invoice and wondering about it.)

George talked about the frailty of language and likened the making of a formal poem to the patterns created by a skater on thin ice over a deep pond. There is something below, beneath the language, to be discovered. “Patterns can be difficult but there’s an exhilaration in executing them.” Language itself is purely a signifier, it’s not the thing itself. Rhyme, he said, is arbitrary – “language is not to be bullied into what you want – you have to listen to it…. there’s a couple dancing here but you’re not the leading partner.”

I particularly liked “most good poems are not the execution of intention but the discovery of possibilities…. with practice you develop an instinct about how you ‘fall’ into something, or how the poem moves along.” By being open to rhyme, but not forcing it, you are opening yourself up to new meanings, unexpected or surprising directions. George’s complaint about many competition entries is simply that he knows too soon where a poem is going – the poet hasn’t surprised herself –  “If there’s no surprise in the poet, there’s no surprise in the poem.”

Another tip about rhyme: if you have two rhyming words you wish to use but it’s not working, try swapping the rhymes – one may be more ‘difficult’ than the other – try using the difficult one first. The simple act of a swap can achieve a different or more interesting effect.

Much of this for me felt relevant for all poetry writing, not just form or aspects of form. I think the idea of ‘being surprised’ is one of my biggest takeaways from the day. I know in myself if I decide to write in a specific form I can get bogged down with metre and rhyming words, without paying attention to the possibilities that may be opening up.

In the afternoon we had a go at writing a 14 line poem to a form introduced by George – not exactly a sonnet, but a 3-part poem: the first part featuring a room or a location where something happens. Then in part two, a shift of perspective – a turn away from the action in part one, to something happening elsewhere. We were encouraged to think in terms of camera stills. Then the final part not exactly a resolution or consequence, but a new direction suggested as a result of the first two parts. Try to improvise, said George, “listen… don’t plan it! Poetry is all hunches!”

We also discussed the reordering of lines, the cutting of early material when you might have been just ‘warming up’ (I find often this is true of blog posts… and to be honest, workshops also!) and the fact that different poets have used the same forms in very different ways – compare the iambic pentameter of Yeats, Tennyson and Gray, for example.

“Nothing is an entrapping as you think … forms are just instruments to play/use.” A day workshop like this is only ever going to be a quick skate over thin ice, but I did feel I took away some useful gems of wisdom and new insights. Can’t ask for more than that really.

The day ended with a sadly all-too-short reading by George from his latest book Bad Machine (l have serious title-envy about that one) which he admits contains much that was experimental for him. He’s a poet who has produced a vast amount of work and is still looking for new challenges and directions. Inspirational stuff. 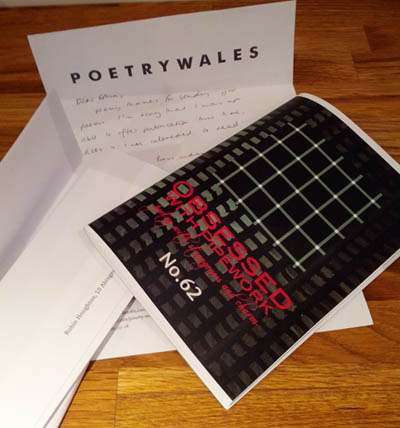 Pingback: Skip to the good bits | Josephine Corcoran on April 21, 2013