At Ty Newydd recently I was fortunate enough to be working alongside some wonderful poets, and with their permission I’ll be featuring some of them here.

The first is Jenny Lewis. I think Jenny was the most experienced of all of us, with many, many strings to her bow, and yet she wore her expertise with generosity and humility. Her comments were insightful and supportive and she produced some lovely work. It was very fitting that she won the competition set for us at the end of the week, with a very clever sestina. Jenny explained that it had been rejected by a certain poetry magazine, and so she’d rather lost faith in it (the poem that is), but Carol Ann Duffy wasn’t having any of that. “Who was the editor?” she barked.

Anyway, I’m delighted that Jenny agreed to have a poem featured here. This is from her latest collection, Taking Mesopotamia (Oxford Poets/ Carcanet 2014). Of it, Bernard O’Donoghue writes: “Jenny Lewis’s quietly angry book is an account of the Iraq wars – mostly imposed from outside – of the past hundred years. Taking Mesopotamia – a brilliantly ironic title for our times – controls its anger through an accomplished and flexible technique in verse and prose. It is compulsory reading, even for those who don’t normally read poetry: an eloquent rejoinder to those who say poetry can’t, or shouldn’t, concern itself with public matters.”

Do visit Jenny’s website to get a feel for everything she’s up to, and for more details of her publications.

Childbirth was like being excavated:
my belly rose on whalebone wings,
pain soared about me like a bloodied angel:

then you were born

I saw you with my own eyes
I held you day and night:
you lay in my arms, a glowing pupa.

At Kut-al-Amara you were back-lit,
the moon pointed you out against the ridge –
when Turkish gunners stopped your spade

« Is it better to write with a pen?

A poem by David Borrott » 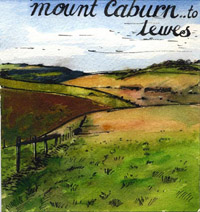