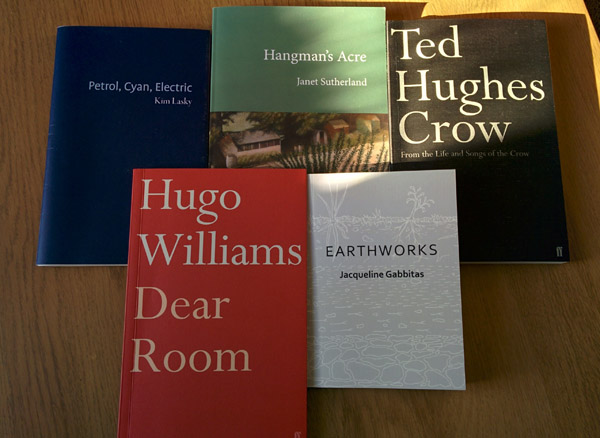 The weather has been so good lately it’s tempting to go out for a walk (or a pub lunch!) rather than read. But I’m enjoying the discipline – I find last thing at night and first thing in the morning are good times to read. This week I read through five more collections.

I love the way this collection is shaped, framed by poems of love, separation and reunion. In between there are tender explorations of ageing, loss and grief. But there’s much more than that: Janet’s poetry of the South Downs, spirituality as seen through nature, the death of animals and a powerful rage against female genital mutilation. And more – such as the short ‘Bone Monkey’ sequence, a precursor to the more recent collection of that name. Janet’s poems are spare and precise, a joy to read over. Favourite poem: ‘A Walk with Five Dewponds’.

At school, we read half a dozen Ted Hughes poems and I memorised ‘Hawk Roosting’ for my A level English. Reading Hughes got me interested in writing poetry and I’ve always regarded him with awe. And yet reading Crow made it so obvious that I’ve only scratched a very small bit of the surface when it comes to his work. This was actually a two-day job, even without re-reading as I went along (one of my ‘reading list’ rules). What to say about Crow? A masterclass in extended metaphor. I would say ‘a roller coaster ride’ if that weren’t such a  stupid cliche – gruesome, comedic, horrifying, tender and raging, you could say it was all those things. Above all it challenged me, pushed me into things I didn’t like, made me want to put the book down, but just as strong was the urge to read on. I had a few nightmares. But it was worth it. Favourite poem: ‘Lovesong’.

More lovely poetry of nature, from close (and slightly spooky) encounters with creatures both dead and alive in forests, on hills and in the garden (‘Bird Buried’) to pagan celebrations, and everywhere the feel and smell of clay, soil, peat, coal and all that lies buried in the earth. There’s a touching memorial which appears to be to the poet’s mother (‘In principio’) and a couple of poems in some kind of dialect – which I struggled a bit with as I couldn’t ‘hear’ the voice, but no doubt would come to life in a reading. Many rich seams of meaning and experience to be uncovered in this short (and neatly packaged) collection. Favourite poem: ‘Bird Buried’.

I think Hermione Lee in the cover blurb nicely sums up what I think of Hugo Williams – “.. a poet of such intimate charm, such grace and cunning, and such ordinary comical sadness”. I’ve dipped into this collection many times and it was easy to read it all through in one go. I know Williams’ work is regarded in some quarters as less than heavyweight. But personally I love the ‘accessible’ poems with their deadpan delivery and crushing irony, the small poems telling of big joy (eg ‘Pieces of Sky’) and even bigger melancholy (eg ‘The Cry’).  So much to love in this collection – OK it’s not Crow, but who says you can’t enjoy both chocolate and curly kale? Favourite poem: ‘All the Way Down.’

This pamphlet is a real gem which was shortlisted for the Michael Marks award in 2013 and I don’t know why it hasn’t had the sort of widespread publicity and acclaim that it deserves. The poems link seemingly diverse topics as the science of colour (‘Newton Sees the Seventh Colour’), early experiments in electricity, a mother’s gradual loss of speech and slow descent – ‘We are past the fact of muscle, flesh and nails.’ (‘As if the very air’) and the poet’s imagined meeting with her father in 1944. It really does get better with every reading because there is always something more to discover and enjoy. Favourite poem: ‘There are not enough words in the language.’