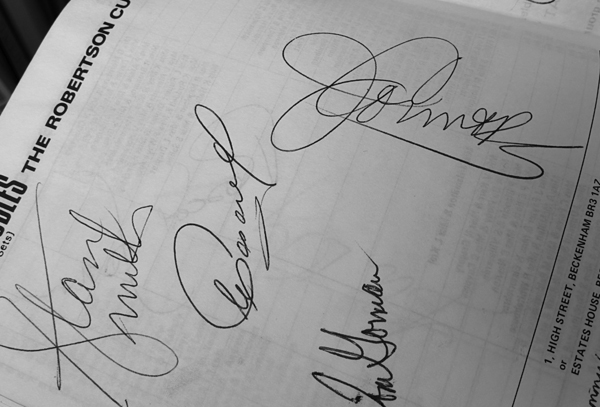 I enjoy watching a bit of Wimbledon although to be honest I went off it big time during that period when all the women were shrieking over every shot. Thankfully there are only a few major offenders left and the newer players don’t seem to have the habit. Hurrah the young generation!

As a teenager I loved going to Wimbledon (it was cheap to get in on a ‘ground’ ticket, and you could get onto all the courts with it, even Centre Court, although you had to stand.) But even closer to home was Beckenham, one of the warm-up events prior to Wimbledon. It was much smaller and more intimate, but you could get all the top players’ autographs as they strolled from the pavilion to the court – Jimmy Connors, Arthur Ashe, Margaret Court, all wandering around amongst the crowd – it was nuts.

So if you’re interested in tennis, you may like this: snaps of the programme from 1976 which I’ve kept. It was a bit of a shock to pick it up again and see the cover, proudly displaying the Robertsons logo, the whole thing would today be seen as WRONG, but back then no-one blinked an eye:

… clearly £2,000 was big money back then … and look at the difference between Men’s and Women’s (sorry, LADIES’) prize money:

And here’s an advert for British Leyland, in those heady days before Margaret Thatcher did for it:

The last word has to go to Donnay, or whichever agency produced what still for me is a standout ad. Was Bjorn Borg cool, or what?