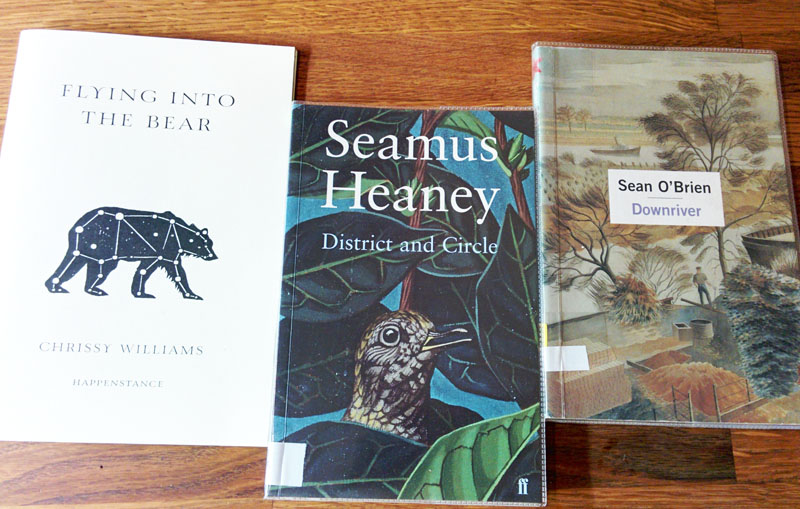 Everything you’d expect from a Heaney collection: poignant but unsentimental recollections of the past, images you can’t get out of your head days later, a familiar strangeness, the ghosts of various characters from Edward Thomas and Dorothy Wordsworth to Harry Boyle the barber in his ‘one room, one chimney house’ (‘A Clip’). Wondrous use of language, so many poems I want to read again and again. Favourite: ‘Höfn’:

The three-tongued glacier has begun to melt.
What will we do, they ask, when boulder-milt
Comes wallowing across the delta flats

And feared its coldness that still seemed enough
To iceblock the plane window dimmed with breath,
deepfreeze the seep of adamantine tilth

And every warm, mouthwatering word of mouth.

Interesting choice of opening poem in this collection, in which a poet at a reading is requested to ‘..bore the arse off your nearest and dearest instead / Supposing they haven’t divorced you already / Or selfishly put themselves under a train’ (‘Welcome, Major Poet!’) I’m not sure what I was expecting after that, but it wasn’t a series of gritty landscapes, laments, commentary and songs. We’re tossed between classical myth, popular culture and what feel like a series of in-jokes. There’s a rollicking sequence called ‘The Sports Pages’ in which the Olympics, armchair footie experts and the commercialisation of sport is all rounded on – and packaged up in a comedic rhyme scheme that reminds us it is, after all, a game. Then there are train journeys, river journeys, mythical journeys. I wouldn’t say that O’Brien does wistfulness, but in Downriver the sense of place and belonging, and beauty in even the most unlikely places, is tangible –  ‘All our excursions run / Not to our love but where we lived and died.’ (‘Ravilious’). Favourite poem: ‘Postcards to the Rain God.’

I seem to remember from Media Studies that ‘postmodern’ had the qualities of pastiche, parody and cultural scepticism – which is possibly where this pamphlet sits – many of the poems in ‘Flying into the Bear’ are puzzling and I wondered occasionally if I was trying to read more into them than the poet intended. That said, there’s a thrilling energy and ‘so much to like’ (if that’s not too abused a phrase) in the experimental feel. Ezra Pound appears as a puppet ‘bearded, elderly lunatic’ in a poem that’s written as stage directions (‘The Puppet’). Tommy Cooper’s death on live TV features in ‘Bears of the Light Brigade’. There are many notes at the back, which I probably should have read but didn’t. The special textual effects were fun but I wasn’t convinced I needed them. The poems that worked best for me were probably the less surreal numbers, written with a sort of deadpan lyricism, a moving simplicity. – ‘This is London. It is on fire. / I go to bed while it is burning. I wake up / and parts of it are still burning.’ (‘The Burning of the Houses’). Favourite poem: ‘The Invisible Bear’.