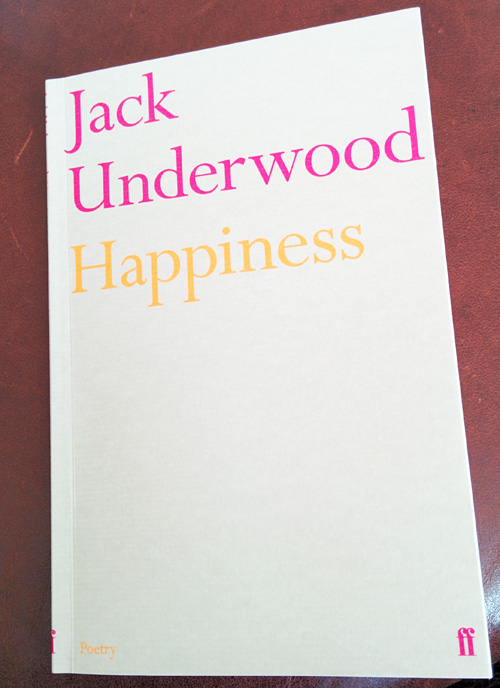 Published by Robin Houghton on October 4, 2015

Only one book to report on in this episode of The Reading List  – there seem to be endless admin jobs involved in moving house, as well as getting out and about exploring my new town when the weather’s been so glorious. Plus I have a cold. Boo! Anyway, excuses be damned. The upshot is that I’m devoting a whole post to this one.

A few years ago I was in a Poetry School class about ‘putting a pamphlet together’, taught by Jack Underwood. I’m not sure I got as much out of it as I could have, partly because the classes always seemed to start late and I always had to leave promptly to get my train. Attendance was patchy, so I didn’t get much of a sense of the other attendees. I was probably also not really ready for a pamphlet.

There was lots to enjoy though. I have a fond memory of Harry Man‘s work and his sense of humour. And although Jack’s teaching style seemed chaotic he had a real presence and was generous, sparky and funny. I’ve always enjoyed his poems when I’ve come across them in magazines, so I was really looking forward to Happiness, his first full collection just out from Faber.

First, the title: you can read as much irony into it as you wish. Inside are poems of love, anxiety, death, depression and most of all (it felt to me) wonder. In the opening poem, an onion is cut in half, and despite the ‘hung cloud of acid’ it’s a thing of beauty.

as the knife bisected

like a maker of names passing
between twins, calling one half Perfect
and the other half also Perfect. (‘Certain’)

The idea of twins and speculation about ‘otherness’, the nature of the relationship of the narrator to the living world round him/her: people, nature, animals, things – there are eggs, toads, and questions without question marks. It’s a world of conundrums and riddles, where the traditional answers to the burning questions of life are found wanting (‘…suppose there was no panther.’ ‘Theology’).

There are poems of sheer joy – ‘She loves you like your hair smells proteinous; she loves you like pausing to move a snail somewhere safer in the rain; she loves you like milk is not like water…’ (‘She Loves You Like’). ‘… the goofy ten gallon/ hats of happiness that children plant on us everytime/ they impersonate knowledge.’ (‘Happiness’)

In ‘Inventory of Friends’, with more than a nod to Shakespeare’s sonnet 130, we get a list of ‘grass-topped lives’ (what a wonderful phrase – suggesting not only the icing on a cake, the pretty surface, but also ‘pushing up daisies’, ie dead below) in which the narrator compares himself to them…

… But with a predictability
that would be cuteness if it weren’t honest first,
my thoughts turn to you…
…
what it might be like to be you, coming home
in four hours’ time with no inkling of the way
my insides grown and click like a tired, old
galleon when you take off your coat like that.

More often than not we’re on a knife edge between happiness and sadness – ‘like an anvil dropped from heaven’ (‘Sometimes your sadness is a yacht’). There’s something terrible and poignant about ‘Your horse’, ‘bending himself into the room… we are crunching on polo mints together / and remembering the way your body used to move.’

In ‘Second’, the narrator offers advice –

…I would tell you to let yourself
be sad, if being sad is what happens when a person,
awkward in a universe as a plum on a plate,
drops their day to the inaccessibility of other days,
and loosens their tie on the sofa to let some life out.

It’s beautiful, unexpected, vibrant stuff and I felt I’d been kicked up the backside. This is a book I see myself back to again and again. Do read it.