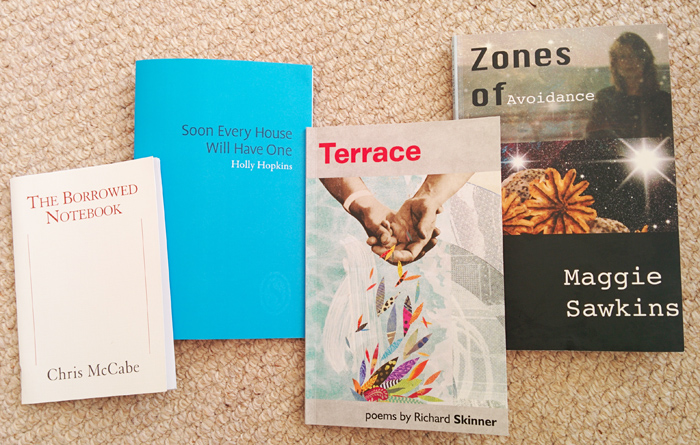 All the National Poetry Day euphoria over with and I’m back into the swing of The Reading List this week, and some wonderful reading to report on. Included here are two pamphlets I picked up at the Poetry Book Fair, by Chris McCabe and Holly Hopkins ( who I also heard read). I’ve had Richard Skinner’s ‘Terrace’ for some time, and thought I’d lost it or lent it out, until I found it down the side of the bed when we moved house – almost as good a tenner – ha ha!

A sequence of numbered poems exploring a young man’s relationship with his father (I think) who has apparently died young. Rich in musical references and wordplay, steeped in Liverpool, popular culture and snatched details/memories ‘you threw me your most assured & scalding/ marshmallows in Russian vodka look’ (5) ‘your best most cynical / strawberries in gravy look’ (1). Many of the pieces are almost in note-form themselves, referencing the ‘notes’ – both those written by the father and discovered after his death ‘your fictionalised biography in a ringbound jotter’, and the mental notes taken by the son, revisited in the light of this discovery. At least, that’s how I read it – the whole piece has a fragmentary feel, and open to interpretation (like all good poetry, in my book)  – but what excited me most about this sequence was the energy of the language and the layer upon layer of repetition, rhyme, puns, jokes and other verbal richness.
‘I took your notes to fish out the best.
To flesh out the beast.
It was a bastard. Made fresh.’ (13)

Holly Hopkins, Soon Every House Will Have One (Smith Doorstop, 2014)

I enjoyed many of the poems in this pamphlet, although for me the strongest were towards the beginning. It opens with a walk through a semi-derelict rural landscape where a barn owl magically appears ‘because you were there and could charm a fish out of its pond’ (‘Offchurch’). It’s the first of a number of strange, sometimes beautiful landscapes throughout the pamphlet that become increasingly dreamlike, where space and place are paramount (‘We left the broken glass of the old city,/ that bowl of smog between chalk hills,/ to live inside high granite walls.’ (‘The City Cut from a Mountain’). A theme we return to many times is the body and body parts – natural, artificial, alive and dead – from mannequins given names and life histories in order to increase their value to collectors (‘Investing in Mannequins’), to a woman with ‘steel hips’ swimming across a lake (‘Margaret and her Cottage, Ontario’). ‘Bicycle Woman’ presents a Frankenstein-esque scenario that takes prosthetics to a poignant extreme. One or two poems didn’t quite work for me and there were times I wanted more, for example the five lines of ‘Country Churches’ seemed too brief.
Favourite poem: ‘Bicycle Woman.’

The cover art is beautiful and reflects the lushness of these poems. The reader enters a world of mysterious landscapes, exotic birds and re-imagined histories. The sky takes centre stage here, whether we’re being blinded by a ‘sunrise blow-torch’ (‘Three Landscapes’), up high looking down (‘Each of these cimitero is like a Chinese character / legible only from the sky’ (‘Isola di San Michele, Venice’) or on a high ridge (‘the sky like bits of blue material, / yet still immaterial.’ (‘Pillar’). There’s an smooth elegance about these poems, but this is no travelogue of gorgeous landscapes. Alongside the oleanders, curaçao and eucalyptus we meet challenging characters and situations. ‘You wait for the men to come, with rouged lips, / brace yourself for the arms and the turn of the lock.’ (‘Indoor Pallor’). A sinister organisation hints at dark activities in a totalitarian-regime-style press release (‘The Monarch Foundation’.) A rich and intriguing collection. Favourite poem: ‘Isola di San Michele, Venice’.

This is a work perhaps better known as performance piece – it won the 2013 Ted Hughes Award for New Work in Poetry and I wrote recently about seeing it performed live in Lewes. As a collection, it’s set out in two parts – in the first we meet the poet’s daughter, seen from her mother’s point of view, and witness her struggle to cope with drug addiction, up to the birth of her child and his subsequent adoption. There is a narrative flow which begins with the eponymous opening sequence, followed by various episodes typically recorded in a flat, factual way, which adds to the horror of it all. ‘Sunday morning. The doorbell rings. I put on my dressing gown and go down. Sitting on the doorstep, with her back to me, is Sunny Girl. She gets up and I let her in. She’s wearing three overcoats, she’s dyed her blonde hair black, she’s spent the whole night walking.’ (‘The Real Thing’)

Part two takes us into the worlds of other recovering addicts and the moving testimony of their stories. ‘…he’d always / considered himself a moral thief – / would only steal from mates, / the old girl’s purse’ (‘Papillon’).

Addiction – the symptoms, the consequences, the reality of it – is ostensibly the subject matter here. But it’s as much about a mother’s metaphysical struggle, her questioning, her need for answers, that accompanies the sheer exhaustion of day-to-day coping. There are some truly heartbreaking moments, but blackish humour also, as in ‘Sub-title: A Visual Exploration of Fetish’. There is lyricism throughout the collection and the language and range of forms are beautifully judged. Sad and fascinating, ultimately offering hope of a sort.
Favourite poem: ‘The Cord’. 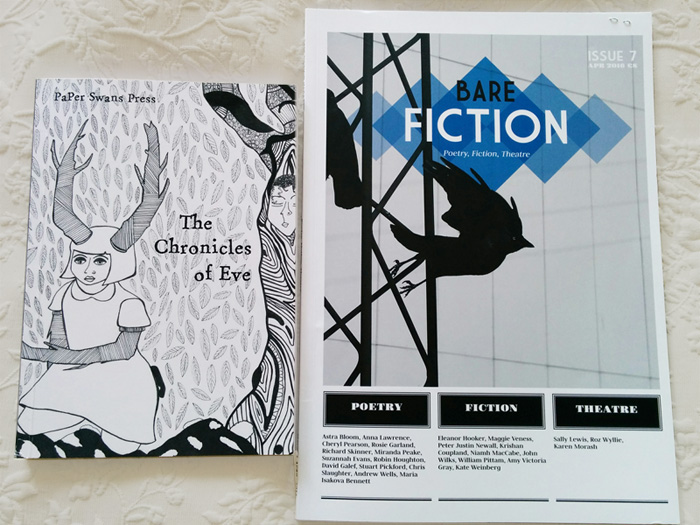