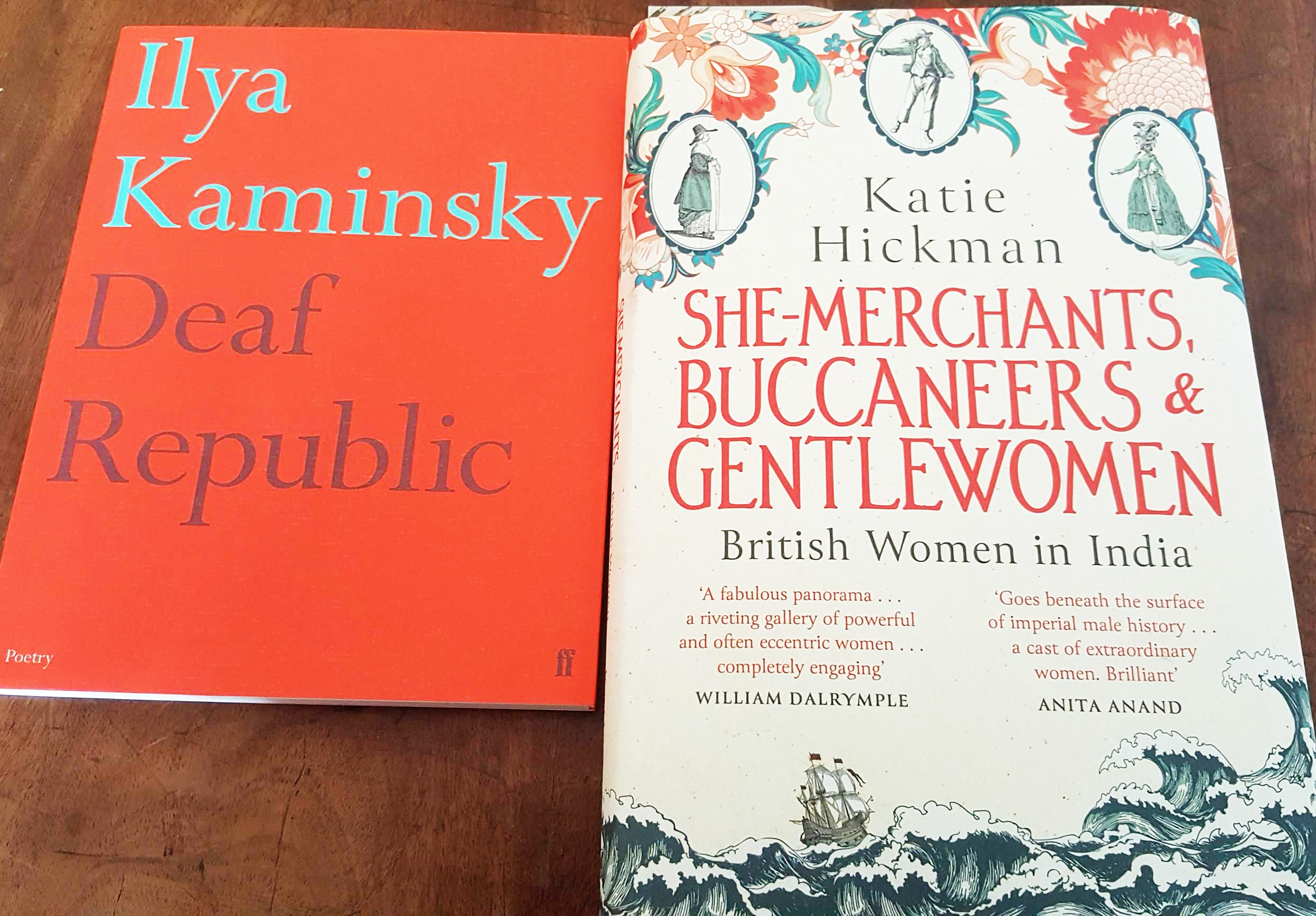 Ilya Kaminsky’s Deaf Republic came through the post from the Poetry Book Society, swathed in accolades. Looking at the title my first thought was of Raymond Antrobus’s The Perseverance, also a PBS Choice, but in fact the two books are very different animals. (I’m a bit sad I don’t have The Perseverance to hand as I gave it to a friend, so can only go on my memory of it.)

While The Perseverance struck me as intensely personal, focusing on the poet’s D/deaf experience and upbringing, Deaf Republic has the feel of a parable, or a Greek tragedy. It’s set during a war, in an occupied town, where the death of a child incites the townspeople to passive resistance which takes the form of feigned deafness. It’s met with brutal retaliation. We follow the fates of two protagonists as events escalate, while the townspeople grow increasingly divided. It’s a stark and bloody tale, made all the more sinister (for me anyway!) by the role of puppets. There’s a horrific dreamlike quality to much of the action. Reading the book felt like a similar experience to reading D M Thomas’s The White Hotel.

Right from the opening poem ‘We Lived Happily during the War’ the reader is invited to examine their own conscience. Is this happening now, in our own society? How are we responding?

in my bed, around my bed America

I took a chair outside and watched the sun.

I found the closing poem ‘In a Time of Peace’ rather hammered home the point. But not enough to detract from the power of the book.

On another track entirely is my current ‘book at bedtime’, She-Merchants, Buccaneers and Gentlewomen: British Women in India by Katie Hickman. She tells the stories of women who left for a new life in India at a time when it must have been an absolutely extraordinary thing to do; the first accounts of such journeys date from as early as 1617. Clearly the sea journey alone must have tested the sturdiest resolve.

It is hard to imagine what resilience it must have taken to survive nineteen months at sea. […] Sea captains were reluctant to take female passengers at all and often confined them to the very lowest decks, where it was usual to house the terrified horses, dogs and other animals. Treated like so much livestock themselves, these early travellers were  obliged to endure living conditions in which there was little or no fresh air or light, and ceilings so low they were never able to stand upright. … in a feeble attempt to allow the air to circulate, women were forbidden to hang up blankets or linen as screens during the day. […] Trips onto the deck to breath some sea air or take some exercise, were often seriously limited, even forbidden by some captains.

I’m completely gripped by these female pioneers. Many of their stories are so fantastical they read like fiction. However, Maya Jasanoff in The Guardian has pointed out that plenty more well-rounded and scholarly books have told these women’s stories before, and claims that ‘She-Merchants’ “for all its good intentions, does for imperial history a bit what a package tour does for travel: it lets readers glimpse an ‘exotic’ location without requiring them to think too much about the people who actually live there.” Ouch. I’m still enjoying the book, but it’s useful to bear this opinion in mind.