Last weekend I had the great pleasure of a trip to London with my fellow Telltale poets, Peter Kenny & Sarah Barnsley. Live Canon, who published my pamphlet ‘Why?’ last year, had invited me to join the other three ‘pamphleteers’ Tania Hershman, Miranda Peake and Katie Griffiths, in a reading at the Boulevard Theatre in Soho. The actual theatre! Not the bar, where we had the launch in November (although that was a cool venue). No, we’re talking stage, a gorgeous auditorium, a seriously professional mic… when we walked in for a ‘sound test’ Miranda was whispering the word ‘terrifying’ and I admit I was a tad nervous myself. But hey, it was intimate, friendly, we were looked after so well and introduced by Sophie in true supportive Live Canon style. It was such a privilege to read as part of the Boulevard’s Sunday Service series, and I’m very grateful to Helen at Live Canon for arranging it – it’s brilliant when a publisher really stands by your work and takes an active role in helping you to promote it.

Plus I got to see my name with the Poet Laureate’s on the same flyer – ha ha! 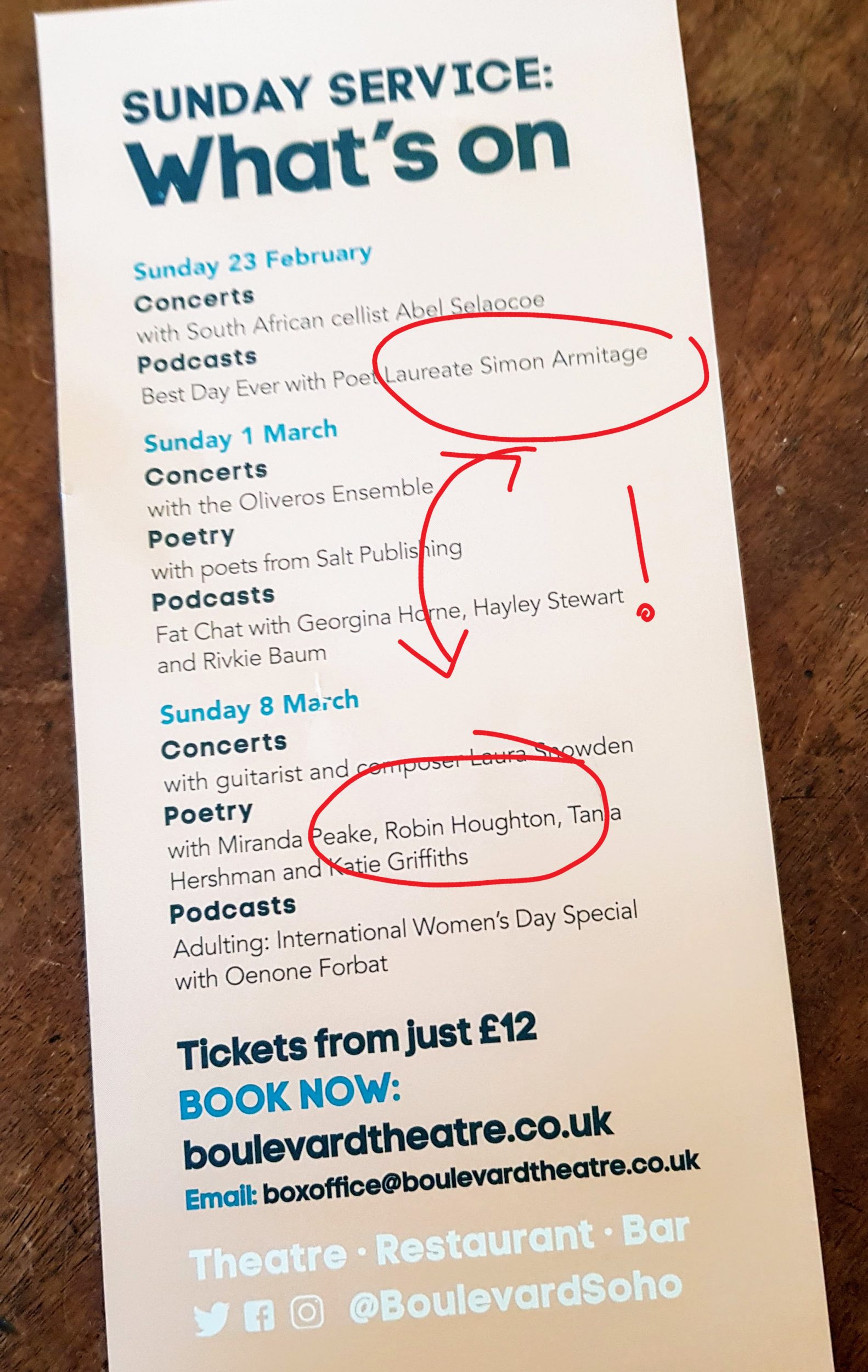 Oddly, we’d all decided on basically the same outfit – skirt or dress, opaque tights and ankle boots. Or is this just a way that women poets of a certain age dress for readings..? Which is rather rude of me since I’m almost certainly the oldest of this group. Anyway, here we are: 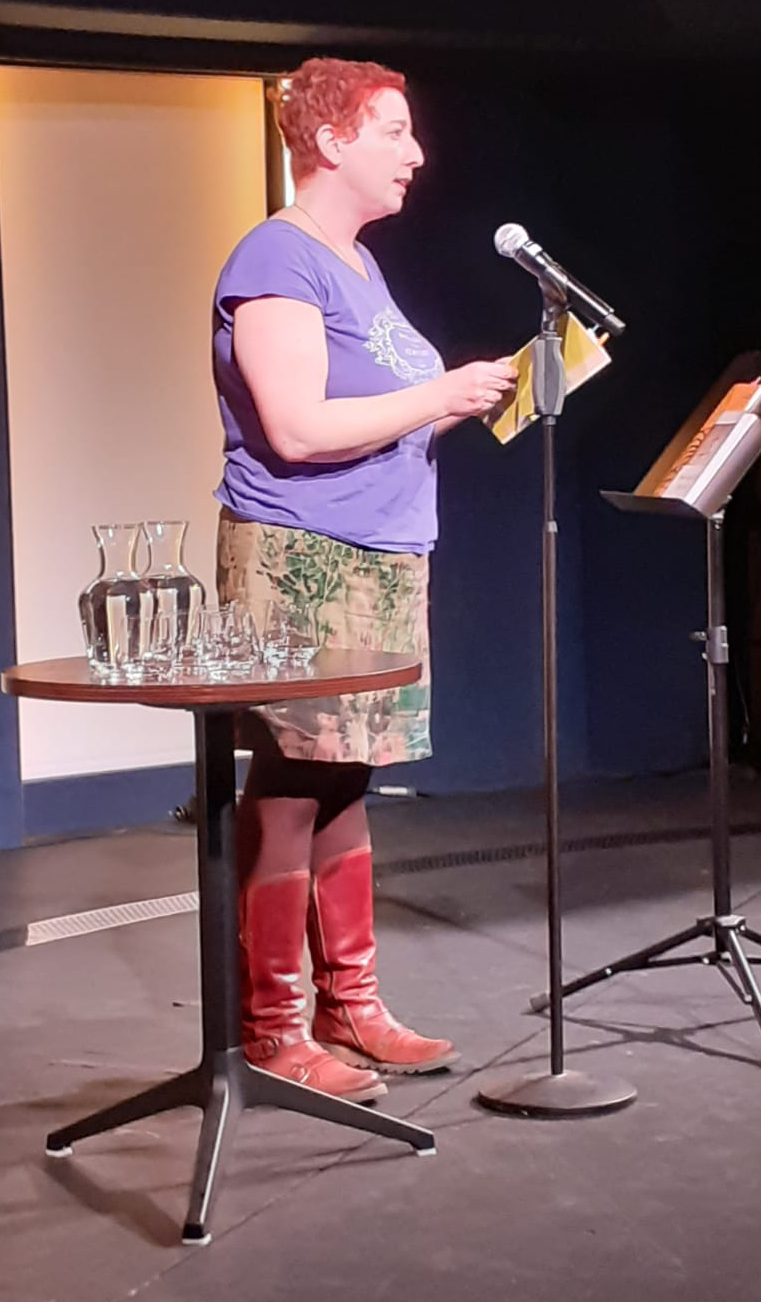 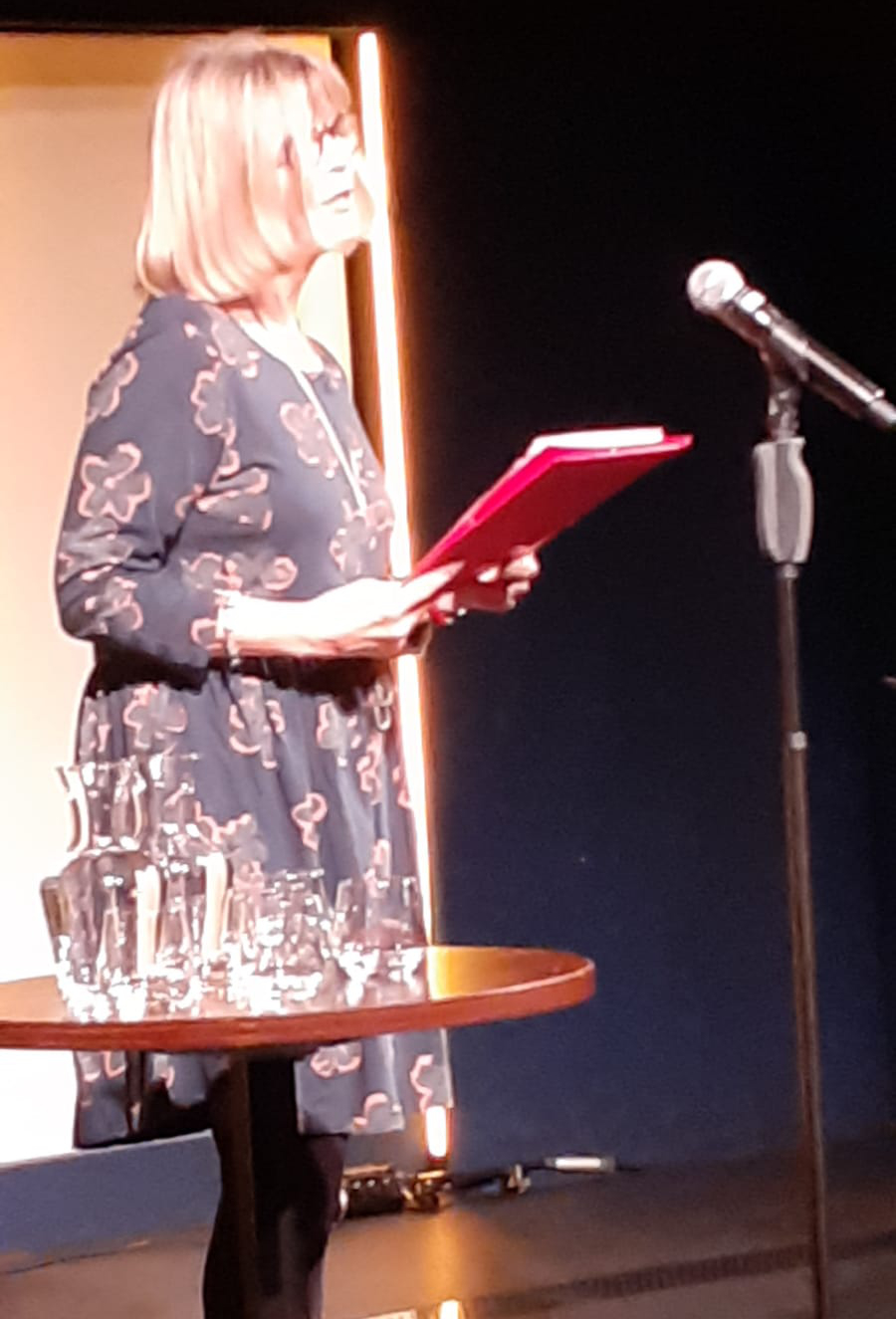 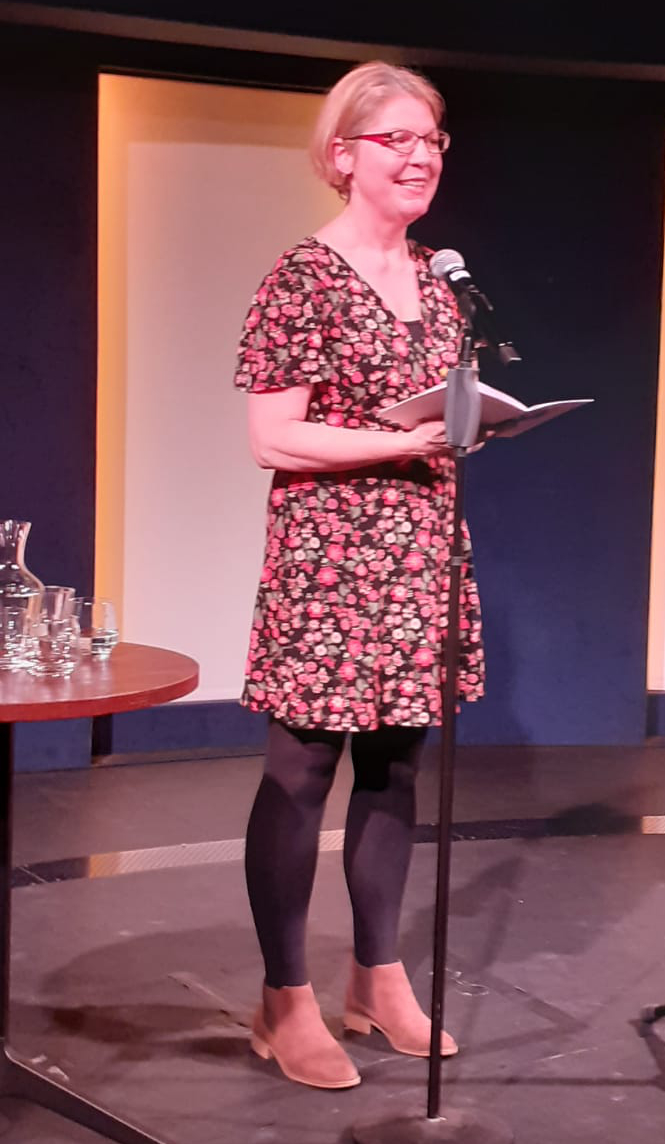 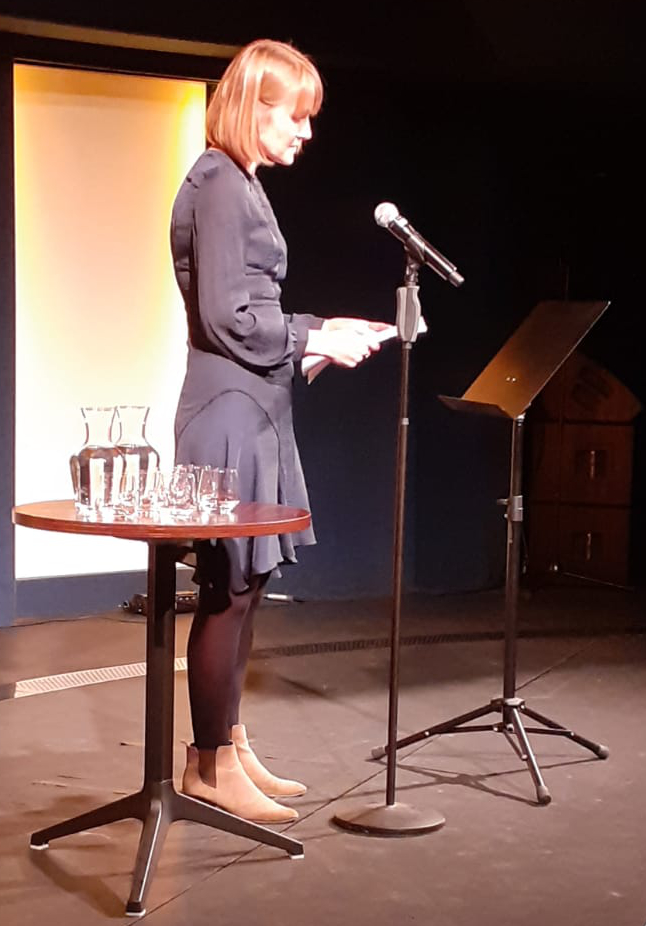 Many thanks to Mark for taking the photos… this was my view of the auditorium just before the start:

Afterwards I was mightily relieved to have a drink with my lovely pals Sarah and Peter. And all this at 4.30 in the afternoon – back home in time for dinner, how civilised! 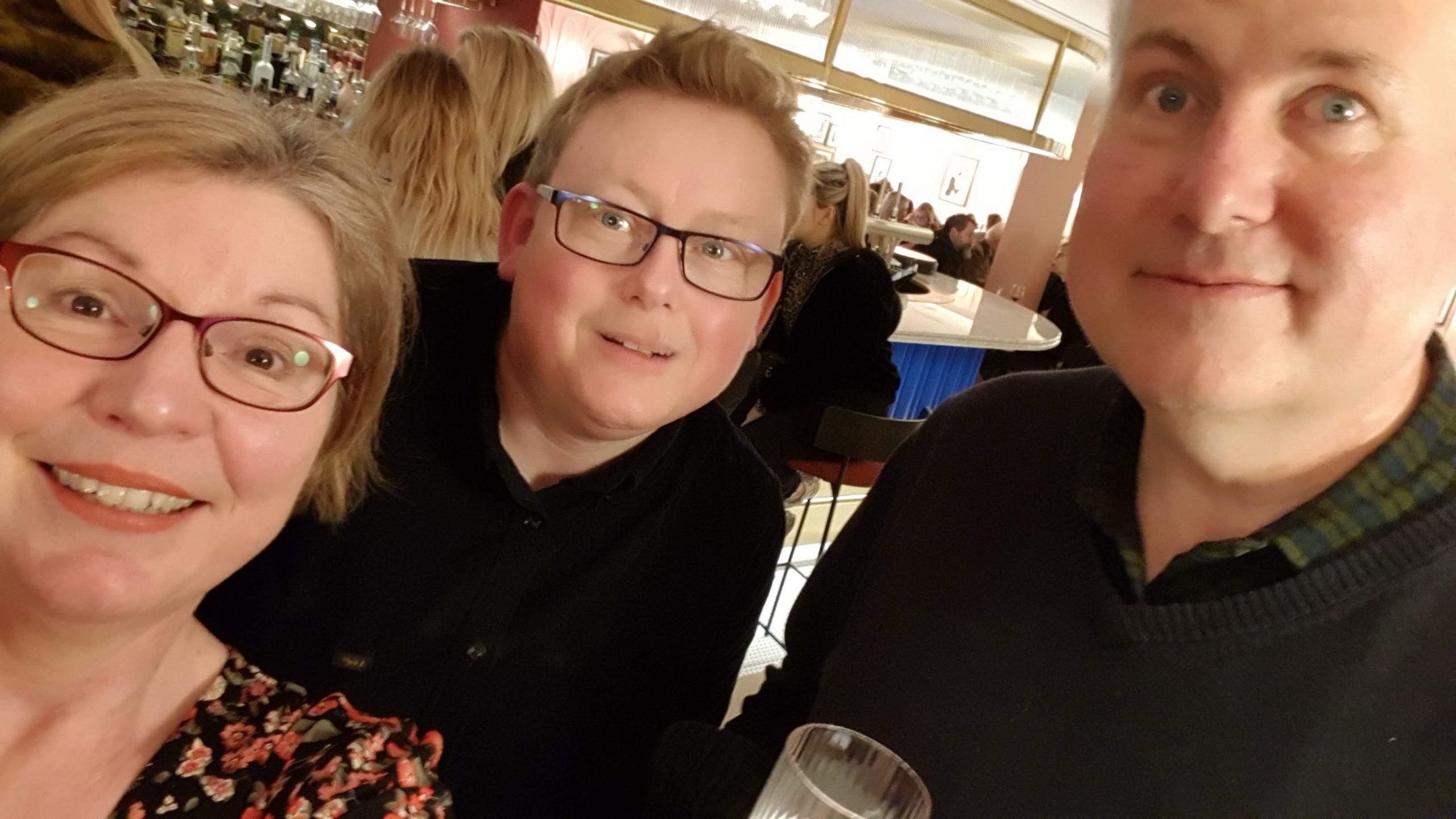 The Telltalers had a grand day out!

And speaking of the pamphlet, I was recently able to donate £30 to the Trussell Trust, which represents £1 for each copy of the pamphlet I’ve sold either through this website or personally. Five more copies have been sold since then and I have five left, so when they’re sold I’ll be able to make the final £10 donation. And thank you also to the poet who responded to my email by donating £20 to the Trussell Trust so that he didn’t have to read my pamphlet – teehee! Well, it’s a good cause!

If you have a pamphlet ready to go then why not enter it into this year’s Live Canon competition? The judge is Glyn Maxwell and closing date March 31st…

‘Why?’ is of course available from the Live Canon website. Thank you so much to everyone who has bought a copy! Much love to you all. 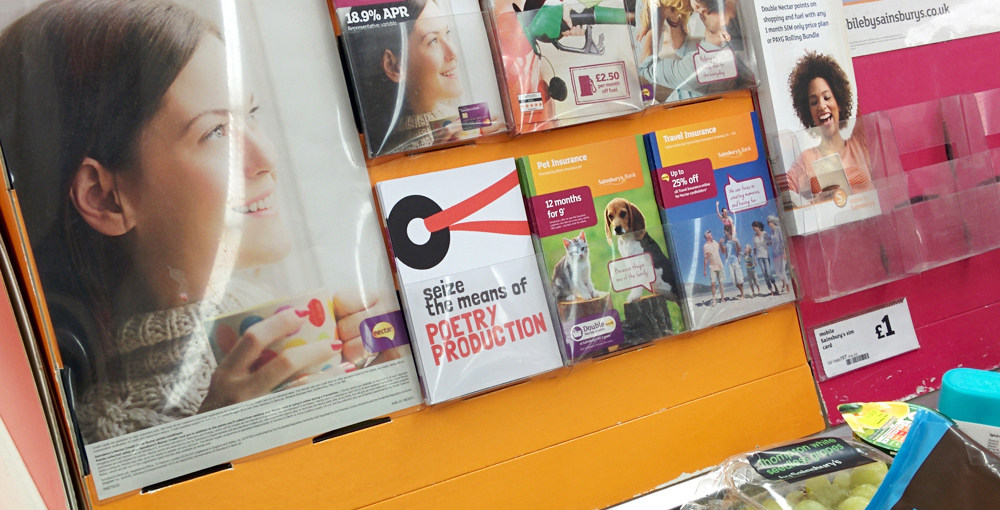 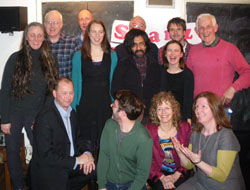