What I’ve been doing (and While you were Sleeping)

Published by Robin Houghton on December 23, 2020

It’s three and a half weeks until my first term essay is due, and I’m starting to relax into it. Which may sound strange, as I know the usual narrative around deadlines is that the tension rises and the panic grows the closer they get. But instead I did all the panicking early on, when I couldn’t decide what to write about and the vastness of possibilities rose in front of me like Mount Everest. Now I have a loose topic, not exactly a plan yet, but I’m getting there. Today, a flurry of post-its. Soon: an essay plan. 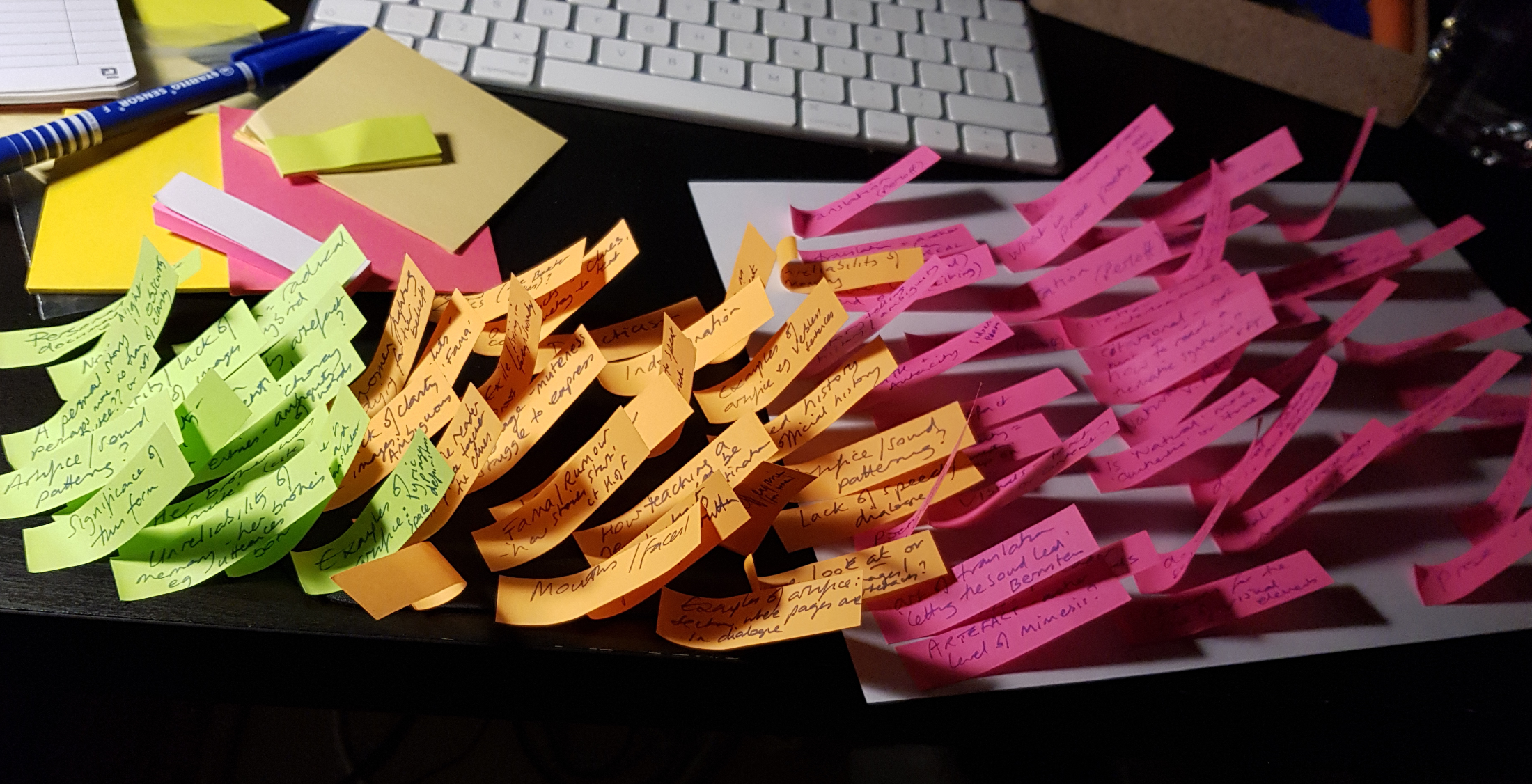 One of the texts I’m focusing on is a book suggested by Peter Kenny who promptly sent me his copy, which is generous of him as it appears to be out of print: Dictee by Theresa Hak Kyung Cha, a poet who died too young, which may be why she’s not more well-known, certainly it seems in the UK. It’s completely gripped me and I’m going to be scrutinising it alongside Anne Carson’s brilliant Nox, another book that I’ve only recently discovered even though it’s a few years old now. Woop!

Last week was Episode 5 of Planet Poetry, in which I interviewed Jack Underwood and Peter and I talked about some of the poetry collections we’ve enjoyed this year. We’re having a few weeks off now so the next episode will be on January 7th. It’s been hard work getting ‘the Planet’ off the ground, but so stimulating and great fun to work with Peter on it.

I’ve not submitted a great many poems this year, in fact nothing in the last six months. Alongside the usual rejections it’s been super to have work published in Stand, The Frogmore Papers, The North, and I do have two poems forthcoming in Prole. But then… nothing. I hope I can get something out soon, or in 2021 I might vanish.

On a more positive note, I’m going to be taking part in an online reading for the Mary Evans Picture Library in January, and Chichester poetry are going to have me as their ‘featured poet’ in February/March. Come on Robin, write some bloody new poems why don’t you.

Meanwhile my wee group the Lewes Singers have had a quiet year, but a few of us got together for a very small, socially-distanced concert last weekend. It was so wonderful to sing with others again, if a bit tricky having to stand so far apart. And emotional. I felt myself welling up during a couple of the carols. I know there’s a lot of discussion about how to take care of our mental health at the moment, but the subtext I always hear is ‘yes but of course physical health is much more important.’ I do wonder if it shouldn’t be a more equal balance.

Yesterday I had what turns out was my last gym workout for while, so jogs on the windy seafront beckon.  And good news today: the arrival of half a dozen favourite feelgood films on second hand DVD from World of Books which Nick and I plan to hunker down with over the coming weeks. (Overboard, It’s a Wonderful Life, While you were Sleeping, Green card etc) I know what you’re thinking: only six? What about the rest of January? But some of those are going to get watched several times, I’m sure. Plus there’s always Netflix.

Thanks so much for reading/commenting on this blog. Wishing you a peaceful Christmas, and (as someone said on a card) a Happier New Year.