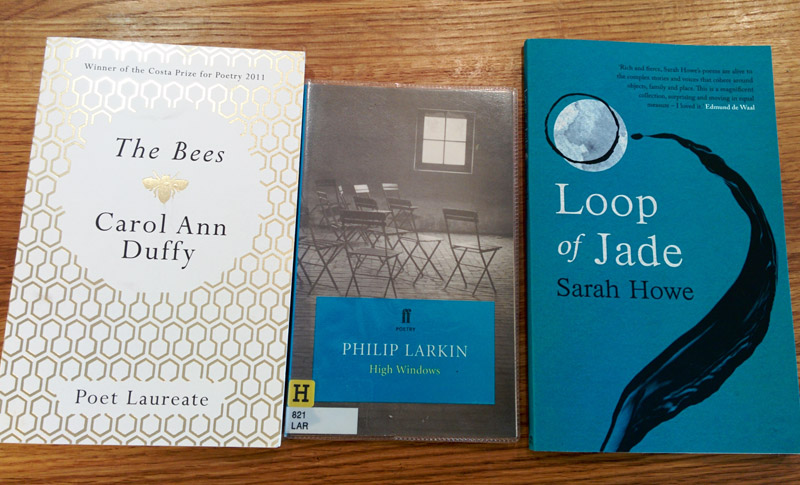 Things have gone a tad pear-shaped these last 2 weeks and I’ve managed to read only 3 books –but I have various excuses, ranging from (ahem!) work, getting ready for our holiday (imminent), selling our house (exchange of contracts WE HOPE imminent), flat-hunting for new flat to replace the one we had to pull out of, a weekend of singing at Westminster Abbey (magical) and arrival of first grandchild (born this morning).

I heard Carol Ann read from this collection when it was shortlisted for the T S Eliot prize. For me she’s a perfect Poet Laureate in that she manages to write poetry that has wide appeal – yet it’s not ‘popular’ in the sense of relentlessly lightweight, and not ‘accessible’ in the sense of there being no work for the reader to do. If there was one overall impression I had after reading this book it was the pleasure Carol Ann takes in the sounds of language – she’s bold with her use of assonance, alliteration and internal rhyme, the most obvious example probably being ‘Cockermouth and Workington’ – ‘No folk fled the flood, / no flags furled or spirits failed –/one brave soul felled.’  Seeded through the book are a number of poems about the poet’s mother, all very moving. Favourite poem: ‘Cold’.

This is where I show my ignorance (or innocence?) because I admit to being a Larkin virgin (unless you count having read the odd notorious excerpt). I spotted this slim volume, romped through the book and thoroughly enjoyed it, even the curmudgeonly stuff, and laughed in what were probably the wrong places. Here is a style that seems to sit somewhere between John Betjeman in his less twee moments and contemporary poets like Sam Riviere: idiomatic, conversational, multi-layered wit. Reading this collection feels a little like overhearing an unguarded conversation in the pub. ‘And however you bank your screw, the money you save / Won’t in the end by you more than a shave.’ (‘Money’). Favourite poem: ‘Vers de société’.

I bought this book on the basis of one short poem in the Guardian and I’m pleased I did. You know that feeling when you’re reading stuff by someone you’ve not encountered before, and you just know this is the Real Thing. I see Loop of Jade is on the Forward Prize shortlist and I’ve absolutely no doubt Sarah Howe will be all over the big poetry prizes in the future, on GCSE syllabi and more. It’s a big, lush book which had me intrigued from the off. I wasn’t convinced by the back cover blurb and the promise of ‘an exploration of self and place, of migration and inheritance’, which sounded a bit familiar. But to be fair it’s hard to describe the density of the language and the pull of so many intricate images, of contemporary China, memories of the poet, her mother and grandmother (‘half-finished bowls / of rice, the ivory Mah Jong tablets / clacking, like joints, swift and mechanical’ – ‘Crossing from Guangdong’), ancient stories and fantastic characters. There are prose poems, snippets of chinese, a meditation on a life model, a hot night in Arizona, a beautiful ekphrastic poem which should be used as reference in all workshops on the subject.

At the start of the book is a quote from Borges referring to ‘a certain Chinese encyclopedia entitled The Celestial Emporium of Benevolent Knowledge‘ which classifies animals into groups such as ‘sirens’, ‘frenzied’ and ‘drawn with a very fine camelhair brush’. These then form the basis for many of the poems in the collection. Super, super stuff.  Favourite poem at the moment (but hard to choose): ‘Woman in the garden’.