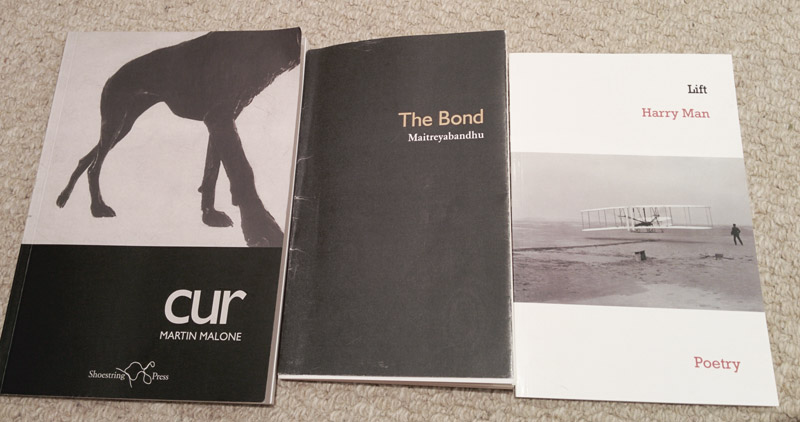 Published by Robin Houghton on October 22, 2015

This week, three books by men, all with names starting with M, all with (pretty much) monochrome cover art and three of the shortest titles ever. Spooky! This is the latest post in my Reading List project begun in July 2015.

To read Cur in one sitting is a rollicking ride. The big themes of love, death, growing up, relationships and the like are all here, filtered through a range of references from pop culture to ancient Greece. This is a book that namechecks (among others) Jackie Pallo, Tuthmosis, Versace and The Smiths.

The first (and title) poem threw me into a Hughes-esque world of animal intensity and raw emotion. It’s the first of a sequence of twelve or so which explore a relationship, sometimes in narrative terms, sometimes reflective. In ‘Life Drawing’ the poet considers his sleeping lover and how he might paint her, the backdrop ‘Some capture of hinterland, an inkling shade of unknown.’ We meet the ‘Inkling’ again at the end of the book, the unborn baby as seen on an ultrasound image.

The changes of register are surprising, and music is everywhere – ‘Then you’re beside me, in a wind-tumbled / fluster of rooks and their cracked peppercorn / of song.’ (Alice) ‘The backbeat is all / – triplet, sinew, farts and porn – / born to it, solid.’ (‘Meet the Band’). Something I quite liked (but I can imagine not everyone would) is a certain knowingness that pervades some of the poems – almost as if to make up for the wonder and openness of others. It feels like a breaking of the fourth wall, as in: ‘Impossible to withhold comment, then, on the ironies of choice made / when a crippled Tawny took to roosting / in the garage of the Gadd’s semi.’ (Gadd’s Owl), or ’What he really handed me was some final flourish / of golden-summer cliche’ (‘Egging’), or ‘Yes, let’s play this game and go there, / leaf through your back pages, trace the stages/ and versions that led you to now and this man.’ (‘Life Drawing’).

I didn’t feel I had the key to all the poems, but that’s inevitable – I still got a jolt of pleasure to see a reference to ‘Alias Smith & Jones’ to which I was addicted – ADDICTED – when I was about 12, the opening script of which I still know by heart. And you can’t help but be joshed along by the satire of ‘Ver: A Modest Proposal’, enjoy the humour of ‘Lords of the Ring’. That’s not to say Malone doesn’t have a subtlety of touch, far from it – evidence, for example, ‘Eclogue’ and the heartbreaking ‘Like I was your girlfriend.’ There’s an underlying seriousness throughout which brings to mind the ‘craughing’ (simultaneously laughing and crying) described in ‘Doing Words’. A rich, full-fat collection. Favourite poem: ‘On an afternoon like this she takes a new lover.’

Just before reading this pamphlet I’d been tackling the first of Eliot’s Four Quartets. (I’m reading the heavy duty stuff in stages. Betcha can’t wait for my thimble-full of thoughts on The Waste Land…) As a consequence I started seeing little parallel themes and images which I’m sure are co-incidences, but I wonder if that’s what happens when reading collections back-to-back. Or even reading individual poems back-to-back, as when judging a competition or considering submissions for a magazine. Anyway, I digress.

Maitreyabandhu is a poet I noticed a lot when I was starting to submit to magazines. His name was everywhere, and accompanied by what seemed to me the most perfect and succinct of biogs which I wanted to emulate. Since The Bond he has gone on to have two collections with Bloodaxe, The Crumb Road and Yarn, and he hosts the Poetry East series which I’ve never managed to get to, but all the readings/interviews are on YouTube.

The Bond takes us on a journey through a young boy’s formative years and the tentative beginnings of a first relationship. Some of the poems are in the first person and written with the straightforwardness and voice of a child, ‘I’d follow my mother round the house and watch her/ … She’d tuck the sheets / and blankets in so tight, you had to wriggle / when you got in to make a proper space!’ (‘The Chest of Drawers’). Others are written as the adult looking back, sometimes with a certain wary retrospection, or in the distancing third person ‘He had a landscape in his head… the place the dog jumped in and barked and bit the water; / the lawn of someone’s house.’ (‘A few fields’). Interspersed with these are a number of enigmatic, allegorical poems open to interpretation, such as an apparent moment of enlightenment (‘The Small Boy and the Mouse’).

Throughout the collection is a sense of place, location, and the recurrence of certain details – a set of keys, the dogs, the father’s tools, dust – highlights their significance. From the initial ‘stand-alone place, big enough for one’ (‘The Coat Cupboard’) to the ‘den’ or ‘hidey hole’ we return to in several of the poems, where the boy meets secretly with his friend, to the amount of effort expended in the raising of a signpost that ‘points at something too far away to see’, (‘Signpost’), it feels like the narrator (and we) are on a mission to decode the events of the past and the details that linger in childhood memory. There’s a central sestina upon which the collection seems to turn, expressing the crux of it all ‘The den we found was presence and a gap. / You said nothing. I said nothing back. I had my way / of thinking, touching your ill-remembered face.’ (‘Sestina’). Favourite poem: ‘The Cutting.’

A pamphlet that set challenges for the typesetter! Rather like Sarah James, whose book Be[yond] I reviewed a few weeks ago, here’s a poet who likes to play with layout, word order and the convention of line. This collection bristles with electricity and experimentation. Its broad themes are space travel, time travel, human flight, technology and a good deal of ‘what if’. I’d read ‘Lift’ when it first came out and Harry kindly allowed me to reproduce one of my favourite poems from the book, ‘telesue’, which you can read here.

As if mirroring the other-worldliness of their subject matter, the poems delight in technical and sometimes strange vocabulary (‘circumzenithal’, ‘plitter’, ‘flensed’, ‘zoopraxiascopic’), but Man also has a fresh way with phraseology – sheep ‘chewing with the expression of someone who thinks / they can hear the telephone’ (‘Sheep Get Inquisitive after a Meteor Strike, Stanbury Moor’), ‘A Saturn V sheds her heavy feathers / in the smoke, a rising asterisk of light’ (‘The Discovery’). Several of the poems have titles that read like newspaper headlines, and there are plenty of jokes – ‘I have a question for you guys, / how rare are villages?’ (‘Lines Derived from Minecraft Player Queries’). It’s all quite geeky and sometimes a bit confusing, but then I guess that’s the idea – like the ‘Re-entry of the First American in Space’, you don’t always have a clue what’s going on, but hey!

Interesting to note a connection with ‘Cur’ – both collections have poems about ultrasound scans. From Malone we get ‘fishbone, heartbeat, / the opening sequence from Doctor Who’, the unborn child with ‘an extraterrestrial hand’ (‘Inkling’). From Man: ‘The white artery of your spine / hovers beneath a butterfly’s ghost; / wings budding into flight / twice a second, heartbeat by heartbeat.’ (‘Ultrasound’).  Favourite poem: ‘Troubleshooting’.