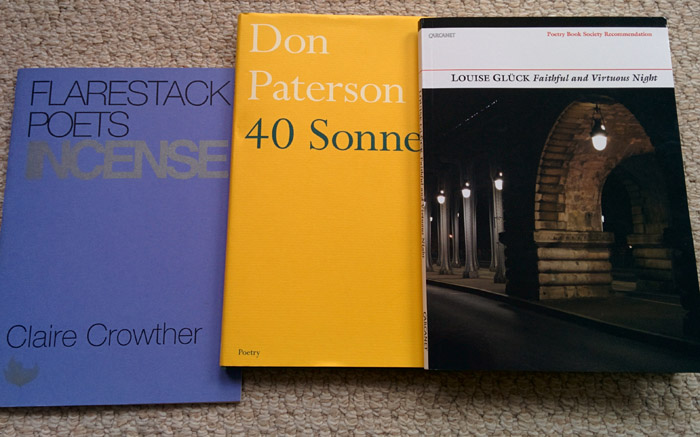 Published by Robin Houghton on November 17, 2015

These pocket-sized reviews have been getting a bit long lately and that’s not good, because I start thinking “do I have time to write a 1,500 word post today?” and tend to put it off. So here goes, this is me trying to cut back on the waffle. A couple of paragraphs, a taster… then over to you.

I picked this up at the Poetry Book Fair as part of my drive to read more US poetry, and Glück’s name has since come up twice. Firstly at John McCullough’s course at New Writing South, and secondly at Aldeburgh last week where Tony Hoagland suggested her career has paralleled that of Sharon Olds, but with Glück enjoying the imprimatur of the US poetry establishment while Olds has been the more ‘accessible’ and popular.

Faithful and Virtuous Night is unlike anything I’ve read before, except perhaps D M Thomas’s The White Hotel, a strange and disturbing book where the reader is pulled into an unreliable and dreamlike narrative and left without a handhold. The first poem, ‘Parable’, hints that we may about to be going on a journey, or maybe not. The narrator and his/her companions appear to go through various trials – extreme weather, endless discussions. ‘…we had changed although / we never moved..’ The poems that follow are intriguing – I wanted to keep reading, not just because I wanted to decode the secrets but also because of the storytelling – it brought to mind A Thousand and One Nights…. night, what happens at night, what happens in the shadows of the mind – just when we think we’ve got somewhere we find ourselves still and square one. The narrator has questions and the reader has them too.

A number of poems read as a someone recalling childhood memories but always half in the dark – either literally or metaphorically. The older brother comes in and out of the narrative, as does an aunt, and the dead parents. The narrator retells the fine details of dreams, episodes that may have actually happened, and stories much in the style of Aesop’s Fables. Glück often writes in a flat, unemotional tone but the sense of wonder and mystery is never far off:

I soon found myself
at my narrow table; to my right
the remains of a small meal.

But if the essence of time is change,
how can anything become nothing?

Favourite poem: ‘The Sword in the Stone’.

There are reviews aplenty of this one, shortlisted for the T S Eliot prize this year, but I’ve resisted them even though they may have helped me with some of the poems in this collection.

I wasn’t really expecting 40 Shakespearean sonnets from DP. But the majority of these poems are fourteen lines long, many of them do employ traditional end-rhyme and conventional layouts and quite of few of them are celebratory, if not out-and-out love poems. Sorry if I’m sounding a bit bogged down with technicalities but any book with such a title invites it. But … To The Poems:

I confess I took a while to get into the book. A cluster of existential openers held me back a little on first reading, as did some of the poems for or about people I’m not familiar with left me. That feeling of being at a glamorous or intellectual get-together and not quite being in the know. TV character ‘House’ and Tony Blair get the ironic treatment (the latter somewhat less sympathetically – ‘They are your dead, who still rose to the birds / the day we filled the booths and made the cross, / before you’d forced them howling to their knees / to suffer your attentions. Spare us. Please.’ (‘The Big Listener’). Frustration with bureaucracy (‘To Dundee City Council’, ‘An Incarnation’) rubs along with humour, allegory and experimental pieces such as ‘Seance’ and ‘The Version’. With two poems referencing Francesca Woodman, I gave in to curiosity and looked her up.

The final sonnet (they’re not numbered, although once again the book title made me want to know where I was in the sequence) is for me one of the most beautiful, the discovery and uncovering of an old roundabout by a father and his sons, who after much effort get it moving again

‘ … Our hands still burning
we lay and looked up at a sky so clear
there was nothing in the world to prove our turning
but our light heads, and the wind’s lung.’

Of course in my mind the sainted DP can do no wrong. So I hope you appreciate the effort I’ve made to not gush. I’ll save that for after I see him reading next month – ha!

There is so much about this pamphlet that’s clever. I have poem-title envy in spades – ‘This Poem Must Take Clothes Off’, ‘Over is Almost All of Lover’, are just two examples. The sequence consists of 23 poems all of which are fatras – ‘a medieval form consisting of eleven lines and an introductory couplet composed of the first and last lines of the poem.’ We’re also learn on the back cover that the form is associated with ‘nonsense poems’. This, together with the information that Crowther worked for many years as a journalist in the weight management industry, is the key to enjoying the collection. The sense and nonsense of fat, the stories told about it, its vilification, the full physical, emotional and psychological weight of it, is all explored. ‘Even academics / believe fat-calories / are laid down / as fat without / the brain / knowing.’ (‘Fataboo’). ‘Size is my name. / It’s stated on the tiny labels in my clothes. / I want to change it.’ (‘Check, Check, Check the Even Number.’)

Body image and identity are subjects close to my heart and I wanted to love this pamphlet. Although technically and intellectually I found it very satisfying, the poems didn’t move me beyond a sense of sadness and recognition. I think I wanted more anger, or less coolness, less detachment. I wanted to be incensed. The control and precision of the writing, although no doubt deliberate and referencing the fight for control over the enemy ‘fat’, left me a little flat. Nevertheless, Crowther is a fine poet whose work I enjoy, and reading ‘Incense’ has made me want to seek out more recent stuff.

Favourite poem: ‘Say No and Skip It’