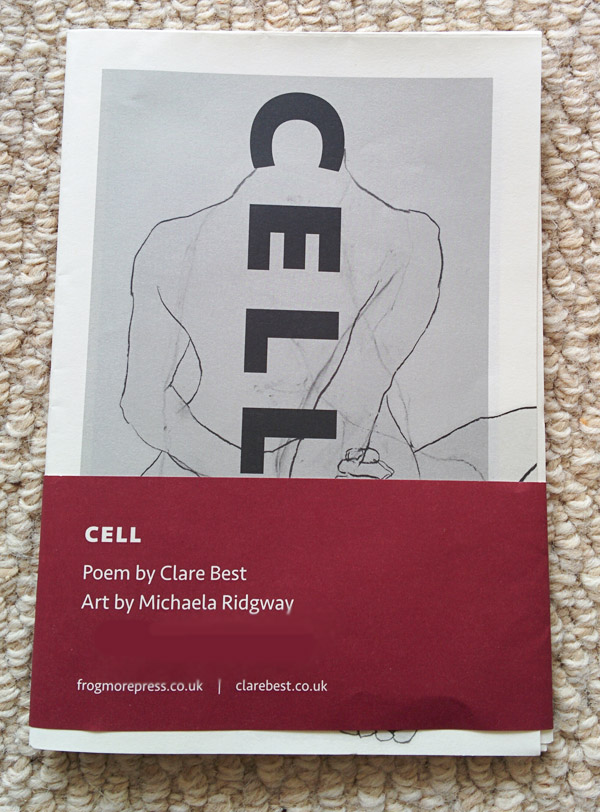 Published by Robin Houghton on December 13, 2015

It seems my blog posts of ‘micro reviews’ have set some sort of trend – who’d have thought?  Anyway, I haven’t posted one for a couple of weeks as other aspects of LIFE have rather taken priority. The original idea to read a book a day was ambitious,  but the blogging of the reviews has proven to be the hardest bit, and something I haven’t always managed to find time for. But that doesn’t mean I haven’t been reading.

Rather than waiting until I have the time to write three or more reviews at once, I think I’ll sometimes just get them out singly. So coming up soon – thoughts on Mark Doty’s  T S Eliot Prize-nominated Deep Lane (Cape) and Wendy Pratt’s pamphlet Lapstrake (Flarestack). But today I’ll focus on one pamphlet.

An unusual pamphlet, both in physical form and concept. Clare Best’s award-winning sequence ‘Cell’ is in the voice of Christine Carpenter, a 14 year old girl who, in 1329, took a vow of  ‘solitary devotion’ and became an anchoress. Accompanying the sequence are a number of powerful pen and charcoal sketches of the human (female) form by Michaela Ridgway (herself an accomplished poet).

In the unfolding and re-folding of the single sheet, you create a box-like space which represents the cell in which the girl spent over 1,000 days. From there, following the sequence isn’t easy – each is numbered in Roman numerals, which took me a few moments to work out (come on then – CCCMLXXI? Quick!) Having been at the launch event, I know from Clare’s reading that the numerals represent the number of days since the girl’s incarceration. Otherwise that too would need some work on the part of the reader.

And that’s surely the point – reading ‘Cell’ was like following a set of clues, deciphering a horrible secret – in figuring out the folding and the ordering, observing the contortions of the figures, the smudged-out body parts that seem to overstuff their pages, even before reading we have to do a little work, but not very much in face of what we’re about to witness in the poems. We are primed to ‘solve’ the mystery. And a mystery it is, certainly to present-day readers, why a young girl would go willingly into such a contract.

Just one day, Mother, since you
kissed my brow, my cheeks and chin.
I must not love the window,
must protect my sinful heart. (II)

In reading Christine’s words and thoughts it’s hard not to be moved – not just by the pathos of the situation, but also the girl’s ongoing reflection in terms of her belief (having perhaps no other framework to cling to) even as she passes from excitement and determination to fear, pain and finally resignation.

Dreams like thoughts –
both sense and
nonsense. How shall I
bear the silence
of this place? (CCLXI)

The reader isn’t spared any details of the girl’s physical and mental deterioration ‘scalp alive with lice’, ‘shrunken gums’, and the nightmares (‘Lucifer, again. … he spreads me, enters like a fist’) but for me the story is told with intimate tenderness and without judgement. ‘Cell’ is a challenging read, moving and highly compelling. Both the artwork and Katy Mawhood’s ingenious pamphlet design corroborate the story and heighten the reader’s involvement – which is what genuine ‘multimedia’ should be about. Excellent job. 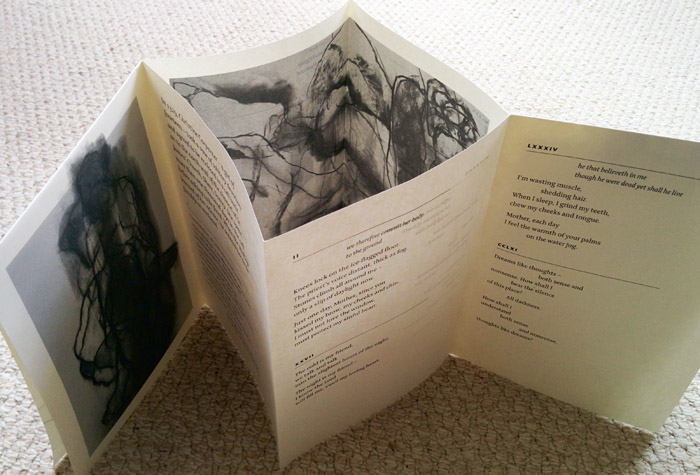