Today’s poet in the spotlight is Antony Mair. Antony has been a brilliant poet friend of mine for some years, firstly as a supporter of the Brighton Stanza and member of the ‘loose committee’ when I was the rep, and latterly as the founder and chief corraller-of-poets at Hastings Stanza. He has an MA in Creative Writing from Lancaster, and is widely published in magazines including Acumen, Agenda, Ink, Sweat & Tears and Poetry Salzburg. Antony recently won the Rottingdean Writers National Poetry Competition.

The one that’s given me most pleasure recently has been ‘Cradle Song’ by Andrea Samuelson, who’s a member of the Hastings Stanza group. It gives a voice to her great-grandmother, who was confined to a mental hospital in Sweden from her early twenties to her death some fifty years later, and whom Andrea identified with as a result of suffering from severe post-natal depression herself. Andrea’s been working on a novel since this collection, but I want her to give us some more poems!

I wish it were that simple.  There’s the usual cycle of completing a poem, thinking it’s a masterpiece, leaving it for a month or so and then seeing it’s a turkey.  Even when I’ve done something I’m pleased with it may not survive an editor’s scrutiny.  If Larkin or Abse were to come back from the dead and consider half a dozen of my efforts ‘decent’ I’d be delighted.

3 – What would be your ideal place for a writing retreat?

An apartment in the old town of Nice would do quite nicely for a week – preferably when something’s on at the opera house!

4 – Do you enter poetry competitions?

Yes, though I’ve wised up quite a lot over the past few years, and can see that even my swans may be geese compared with other’s offerings. It’s a bit of a lottery, but everyone enjoys a flutter.

5 – If someone has never read any poetry, where would you suggest they start?

By reading Lifelines – my edition is New and Collected, from Town House, Dublin.  The project involved asking numerous people, eminent in a wide variety of fields, to nominate their favourite poem and explain why.  The result is an anthology with a considerable plus.

6. Why is end-rhyme considered a good thing in performance poetry, but rarely found in contemporary magazines?

Hearing poetry is difficult.  We’re out of the habit of it.  Rhyme helps to anchor the attention by giving us a sense of structure.  When it comes to contemporary magazines, rhyme is simply out of fashion – I don’t think there’s an easy explanation for that.  Contemporary poets who use rhyme well, such as Gjertrud Schnackenberg in the USA, can achieve effects that are sometimes quietly miraculous.

How about a ‘jabber’?  I was going to suggest a ‘parnassus’, but fear it sounds a little too like ‘up-our-asses’ which is of course a million miles from the truth.

QUICK PLUG:  Antony Mair is one of four poets who have been commissioned to write a poem inspired by the Bayeaux Tapestry. The poems have been set to music by Orlando Gough and will be performed at Clash! a special event in Hastings on 24th September. It’s all part of the 950th anniversary of the Battle of Hastings. Full details here. 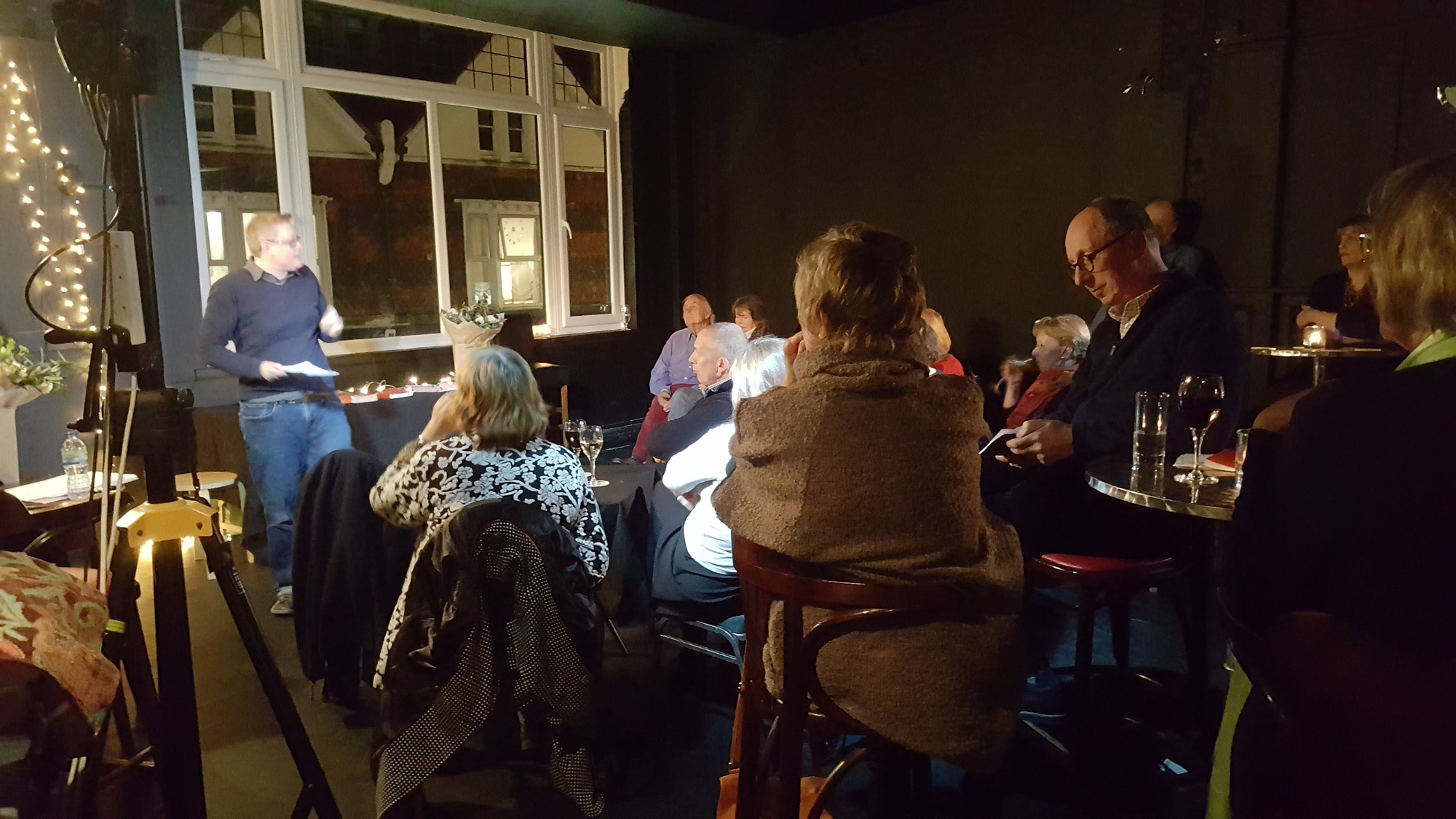