On a literary education (or lack of), dealing with the social media hate-storms, etc

Is it the end of June already? I wonder how you’re getting on. Well, I hope. If you need a shot of positivity, I find Wee Granny still helps…

Recently arrived in the post: two anthologies and issue #3 of Finished Creatures magazine. Finished Creatures was having not one but two online launches, so I thought it would be good to have a read of it beforehand and was looking forward to hearing some of the poems in particular … but did I make a note of the launch times?? I had it firmly in my mind that they were in July, but I’ve just checked the invitation email only to find they were last Thursday and Sunday, so I missed them. DUH! How %@**&! annoying. All I can blame it on is Lockdown Head – that thing whereby you only have two things to do all week and you still forget. Or is that just me??

The anthologies were Poetry & All That Jazz which Barry Smith publishes each year – its contributors are generally poets who have a connection to the Chichester poetry events that Barry organises, although anyone is welcome to submit something. There are many familiar names here, some of whom also feature in Frogmore Press Poetry South East 2020 anthology, a collection selected by the press’s editor Jeremy Page. It’s ten years since the last Poetry South East, which happened just before I started writing seriously and submitting poems to magazines. So it’s a great privilege to make this one. According to the cover blurb the Poetry South East anthologies represent ‘a comprehensive survey of poetic activity in the region in the first decades of the 21st century’. I certainly discovered some favourites old and new, including Janet Sutherland’s ‘Hangman’s Acre’, Robert Hamberger’s ‘Sleeping with uncertainty’, Stephen Bone’s ‘Inventory’ and John O’Donoghue’s ‘His Plane’.

I know it sounds unlikely, but actually I’m motoring through Introduction to Literature, Criticism and Theory (Bennett & Royle, Pearson 2005), as part of my self-education (see below). It’s a lot more interesting than it sounds!

Another rejection from Ambit, on what I think may have been my fifth attempt over eight years, so I think I can safely say my work ain’t a good fit there – oh well, onwards! Then two poems accepted by Prole, which is always good news. So that’s cleared the decks, which means I need to get some more poems out this week.

Thoughts about what next

I’ve been thinking off and on for a few years about what’s going to push my writing on. I’ve thought about finding a mentor, but I’m not sure that’s it. Something that’s been nagging away at me, even though I try not to let it, is that a respected editor who I paid to critique a manuscript, when I’d asked if he would mentor me further, replied that it would be a steep upward curve for me as I have ‘no literary education’. It’s true I have a haphazard approach to reading. If I’m asked to write a review, or judge a poetry competition, I do feel a bit of a fraud (and no it’s not just ‘imposter syndrome’). As writing buddies, I have the Hastings Stanza, a supportive and talented group. I’ve always longed for something else as well, but not been able to define it.

Part of me doesn’t want to go down the Creative Writing MA route, having spoken to people who have. It’s also a huge luxury and not one (especially given the current financial climate) I’m sure I can afford to take. But the prospect of being given directed reading and focus, together with sustained critiquing that develops my writing and helps me situate it in relation to the ‘canon’, is tempting. Interestingly I nearly enrolled for a Creative Writing MA twenty years ago, when I came back from the US and wanted a fresh start. But my head ruled my heart and I took a Digital Media MA instead, which I don’t regret as it set me up for a new career. But it makes me a bit rueful all the same.  So, all of this is a longwinded way of saying I’ve decided after all to apply for that CW MA, and see what happens. I’ll let you know how it turns out!

There’s so much bitterness expressed via social media these days, which is unsurprising I suppose, given what the world is going through, and social media is basically seen by many people as their only opportunity to make their opinions heard. Trouble is, we don’t all need or want to be hearing them, especially as the repetition encouraged by ‘sharing’ quickly turns into an endless storm of hate.

I’ve noticed a few people recently announcing their withdrawal from social channels. I took myself off Facebook some years ago and don’t regret it for a moment. I’m not planning to come off Twitter as I still find it entertaining and useful, plus it’s my only regular social media presence these days. I’m proud to be one of its very early adopters and feel a responsibility to keep on using it as it was intended. But oh my, it can be depressing on Twitter these days. I manage my presence there by muting certain people, unfollowing others, encouraging and supporting good (ie social!) behaviour, continuing to share or create what I feel to be informative and/or entertaining things where possible, staying curious and feeling delight when I come across someone new and interesting to follow. Meanwhile I get the news from The Guardian and The Times online, and never, never, never watch any TV news.

Other stuff I’ve been up to

I’m still practising my handmade notelets/notebooks. Here are a couple. The cover of the dotty one is made from a Sainsbury’s bottle gift bag! 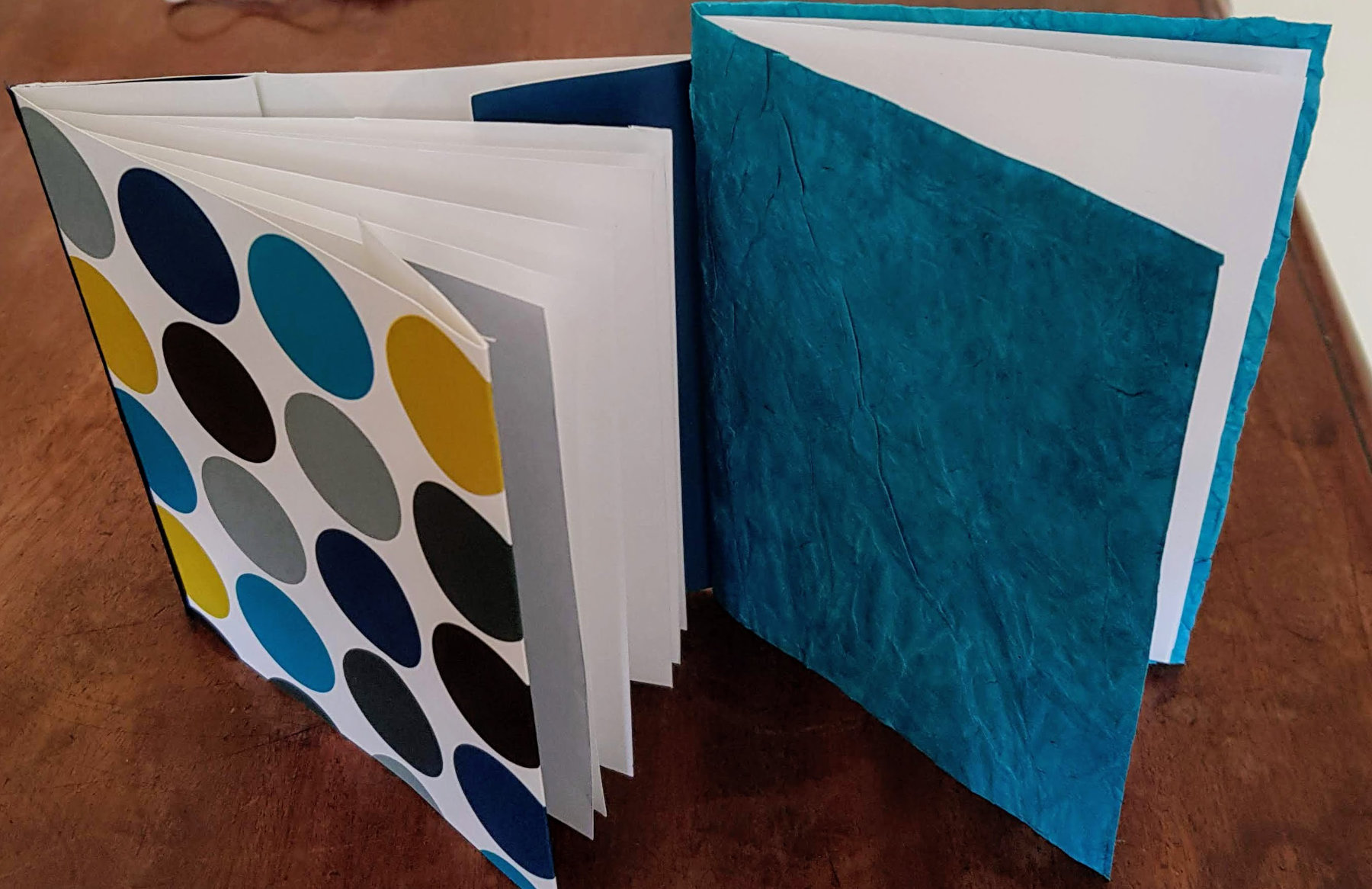 The garden continues to provide work and endless fascination. I love the strange and curious shapes the courgettes are putting out… 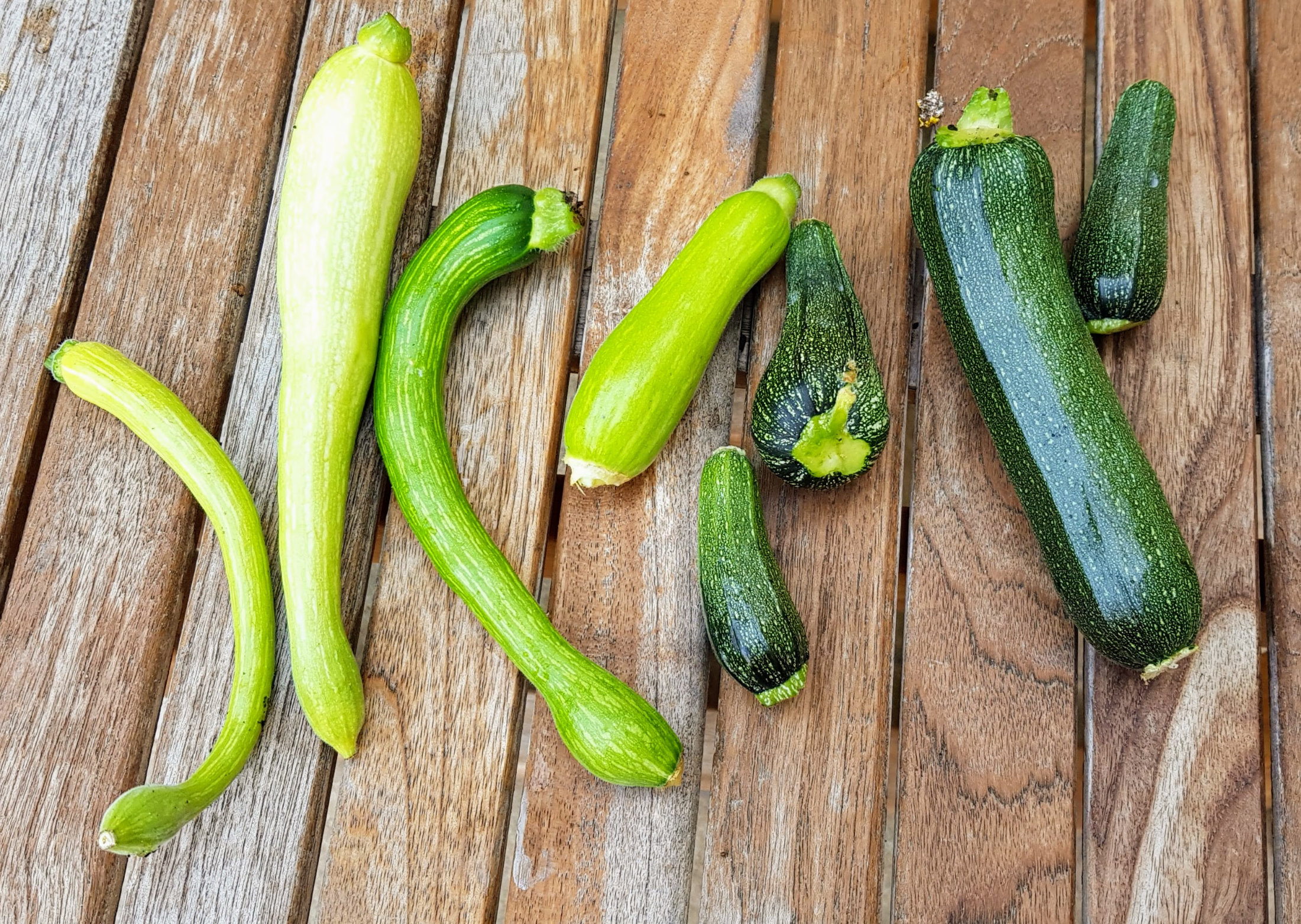 And the small white turnips which are new this year, plus strawberries (when we can get them before the snails etc): 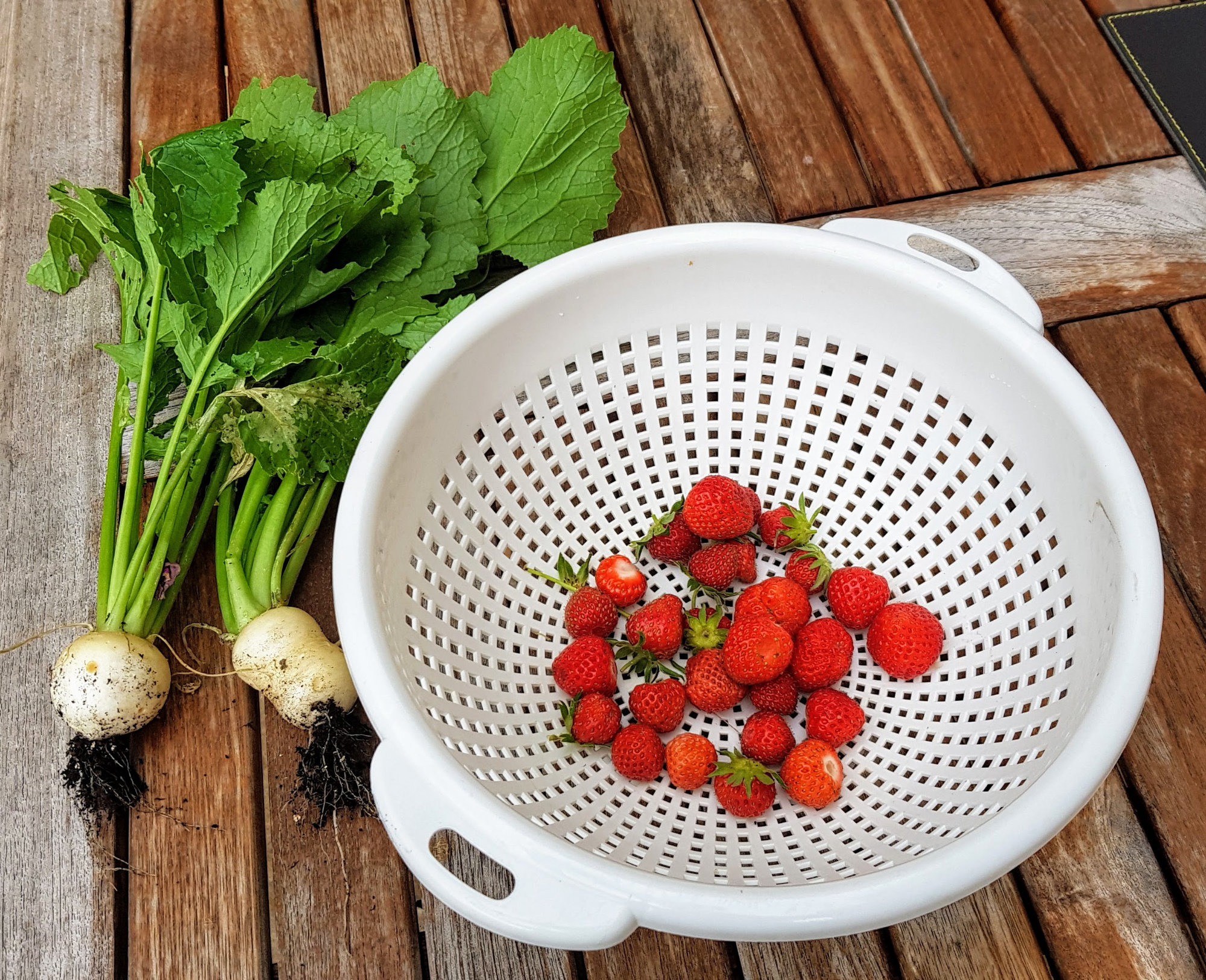