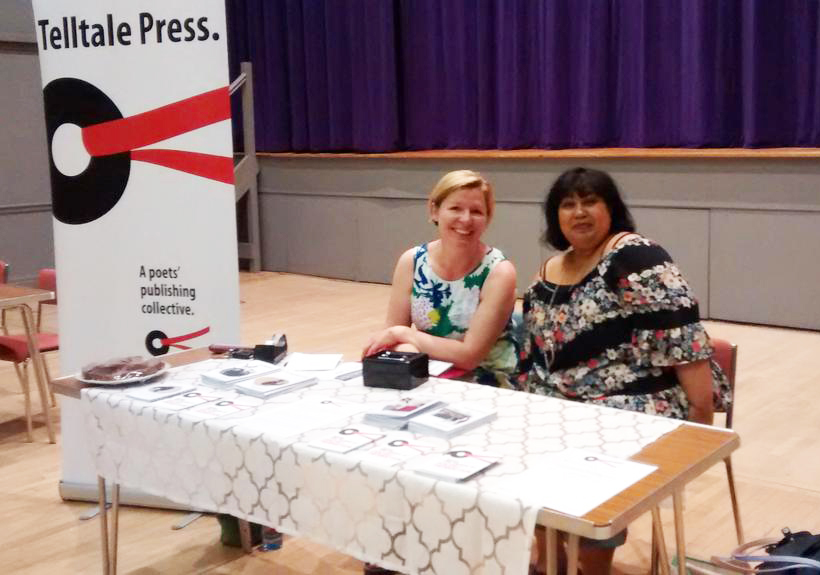 At the South Downs Poetry Festival

When Tim Dawes came to Lewes just a few months ago to talk about his plans for a South Downs Poetry Festival, I admit I was sceptical about whether it could be done in such a short timeframe. But hats off to him, the event happened and from what I can tell, it was a super success.

After a poetry bike ride taking in the length of the South Downs, plus numerous readings and workshops throughout the area, things culminated in a day-long event in Petersfield on Saturday, which I was very pleased to be a part of.

I was there with fellow Telltale Poet Jess Mookherjee, flying the Telltale flag, socialising with fellow publishers/poets and taking in readings and workshops where possible. Being a new festival, it was on a small scale – which made it actually all the more fun. With smallness comes intimacy – everyone was relaxed, poets and organisers accessible, and there was time and space to really talk to people. And we brought cookies – free edibles are always a magnet!

The sun was blazing outside, which made the short walk between venues all the better – although screams of delight from the next-door lido almost made me wish I’d brought my cossie. I even had an enjoyable drive there and back – 80 miles each way through some of Sussex’s loveliest towns, and the A272 was oddly free of horse boxes, cycle races and traction engines. Result! And let’s not forget a memorable warm-up breakfast at the Apothecary Cafe with Jess – we were ON FIRE with ideas by the time we were setting up our stand.

But I digress! The business of the day was of course poetry – Jess and I managed to catch the prize-winning readings of the Havant Poetry Competition, judged by Stephanie Norgate and won by former Brighton Stanza member Anna Kisby with a fine prose poem. Now based in Devon, Anna is a very talented poet who tends to quietly win a lot stuff and deserves a big audience.

During the day there were workshops going on, and readings and performances into the evening. I enjoyed meeting and/or catching up with lots of friendly faces and lovely poet friends including Lucy Cotterill, Hilda Sheehan (sorry we never got to chat properly, Hilda!), Frances White, Hugh Dunkerley, Wendy Klein and Andrew McMillan – whose workshop I managed to get along to and so glad I did – I’ll be posting a full report on this shortly. It was also nice to meet and chat with Alwyn Marriage, who is doing an amazing job running Oversteps Books single-handledly.

My one annoyance was coming out with a phone that I hadn’t charged up properly – a dead phone, DUH! So no photos of our stand (the one above is thanks to the good peeps of Winchester Poetry Festival, taken before we all moved into the much cosier foyer), no pics of the readers, no pics of our superior breakfast, no selfie with Andrew McMillan – tragic!

But despite the lack of pics, it was still a fantastic day. We’re already looking forward to next year’s festival.