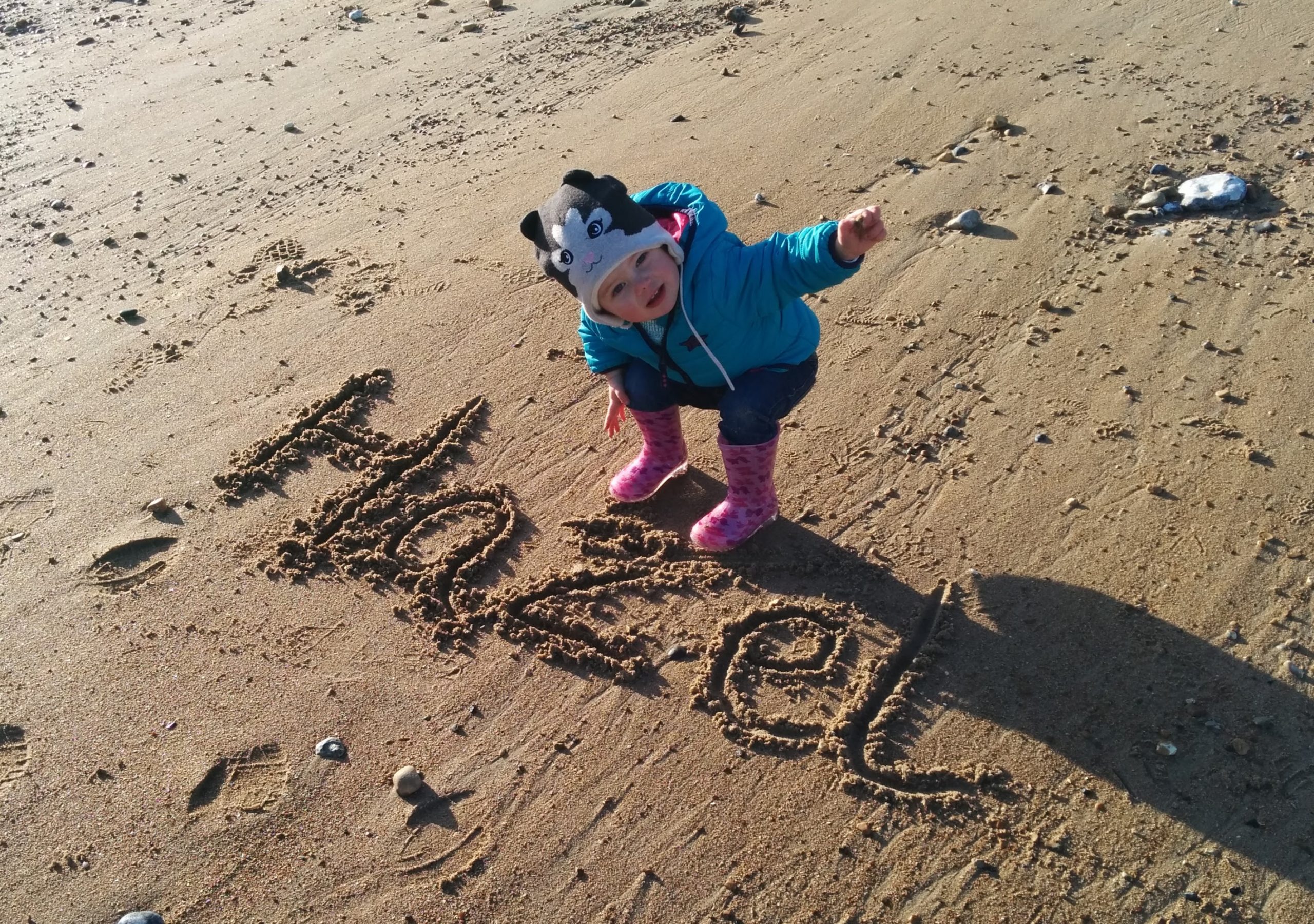 News round-up: the good, the bad & the ugly

Published by Robin Houghton on March 3, 2017

It’s now been two months since I stopped checking in with Facebook and I’m enjoying the freedom it’s given me. I’ve been writing, little by little, not an avalanche of new stuff, but a lot of reworking of old material. I’ve also found new possible projects popping into my head, which may or may not happen but I won’t beat myself up if they don’t.

Being Facebook-free did mean I missed the news of two great-nieces being born on the same day, but good old email did bring me a missive after a couple of days. My siblings’ children are procreating so fast I’m finding it hard to keep track of all the new rellies! Above is a photo of my granddaughter Hazel, enjoying herself on the beach a couple of weeks ago 🙂 Nothing to do with poetry but a nice photo I think! She didn’t write her name herself, but rest assured I shall be coaching her in all things poetry asap.

Good things, and a bit of navel-gazing

I’ve had another poem nominated for the Forward Prize this year, the one that came second in the Stanza comp. Thank you to Paul McGrane of the Poetry Society for putting it forward (sic).

The launch event for Eyewear’s ‘Best British & Irish Poets 2017’ is next month and so if I can get myself to London on a Sunday I’ll have an opportunity to read, which will be fun, and I’m very interested to meet some of the other contributors.

The lovely Kay Syrad has taken one of my poems for Envoi, a magazine I’ve just subscribed to again as it’s come round on my magazine subs rolling schedule. Really enjoying the current issue especially work by Abegail Morley and Neil Elder. The poem in question is another oldie that finally came good – the first draft was written in December 2012 and this was the 15th draft. The moral of the story: if you think the premise of a poem is good, keep working on it and hopefully the execution will get there in the end!

New Writing South have always been very supportive of my work and it’s thanks to them that I’ve been able to have some mentoring from a lovely experienced poet, to help me with a pamphlet. The editing, culling, reassessing and reordering of the poems was an inspirational process for me and the result feels strong. Whether or not I can persuade a publisher of that remains to be seen. Anyway, I’m now seeing certain poems in a very different light, I’ve murdered a few darlings, if you like, and brought a few more back from the dead.

And here’s a funny thing: when I was first on a roll with getting poems in magazines, about four or five years ago, I think I mistook my lack of humility for confidence, whereas now I feel it’s the opposite – being humbled (in the sense of a) not quite achieving what I expected/demanded of myself, b) the more fine poetry I read the more I see realistically where I stand) has somehow helped me become more accepting of my own limitations, and thereby more confident about what I can do.

Oh woe is me for yet more rejections – or as I like to file them, ‘Declined’ submissions – three poems sent back from The High Window, and not for the first time – so perhaps my work is a poor fit there. Actually no other rejections to report during February, although since the winners in the National have all been notified, clearly I didn’t do anything there.  Boo! Quite a few things are still out though, so who knows 🙂

I was fascinated by the comments after my last blog post, it made me appreciate the range of viewpoints there are on the subject – much food for thought. Thanks so much for the lively discussion; I’m very lucky to have such interesting and engaged people reading this blog.