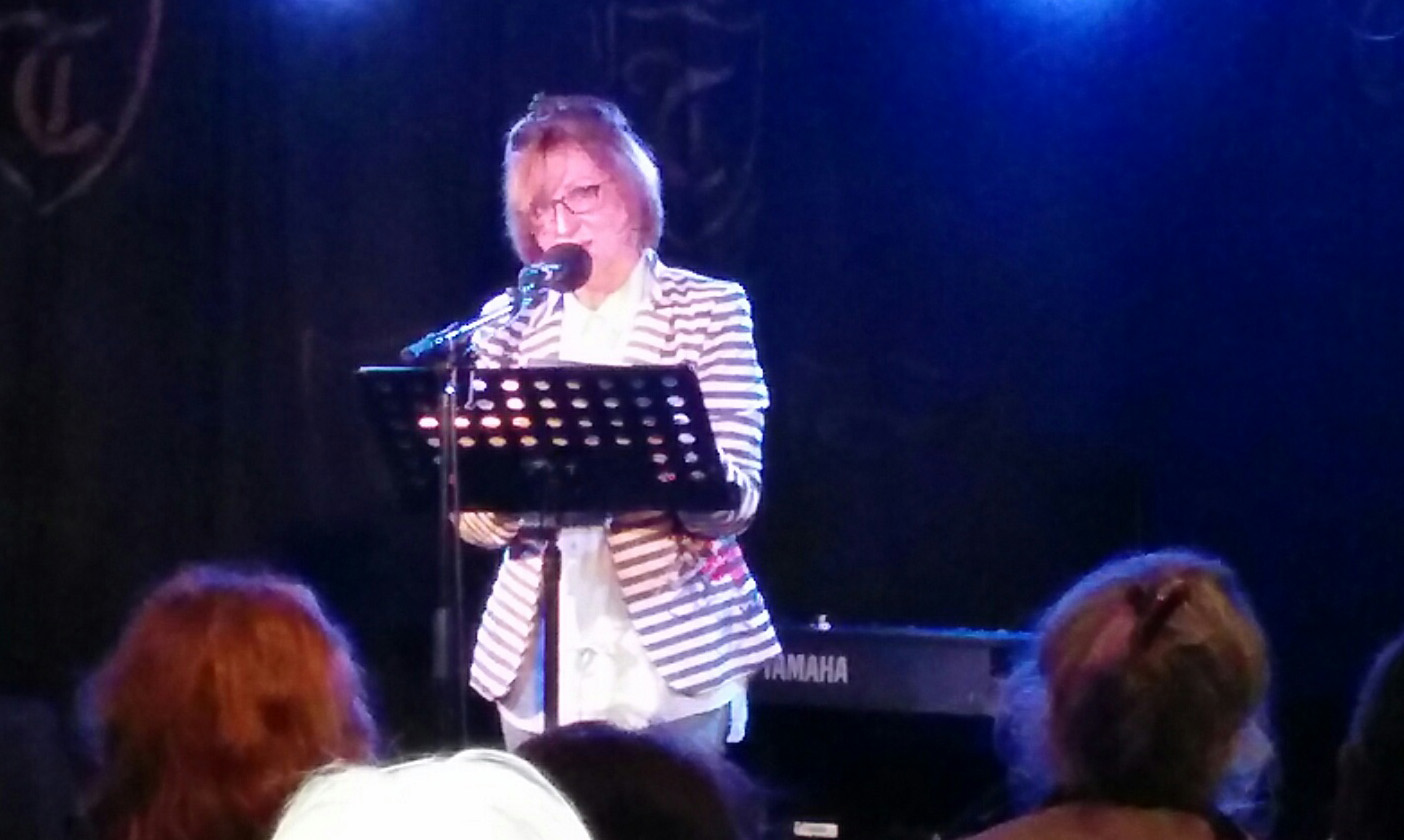 Standing room only at the Troubadour

To be fair, I did have a seat for the first half, but with the sciatica playing up I was happy to stand for the second. Plus it meant a quick getaway at the end with poet friend Jan, and the last (viable) train home.

Coffee-House Poetry at the Troubadour (run by the indefatigable Anne-Marie Fyfe) is always worth the trip to London – I always feel I’m being introduced to interesting and often very fine poets who aren’t necessarily on my radar (for example, who don’t frequent social media and/or are not over-exposed at poetry readings and/or are not UK-based). It’s an intense reminder of the very wide poetry world out there.

On Monday, we heard eight poets, six of whom were new to me, and musical entertainment from Henry Fajemirokun.

Michael Scott (who I know from Swindon Poetry Festival) kicked things off, with a series of poems ostensibly addressed to a ‘little usherette’, but he told us were actually about all the big themes – love, loss, death, family and so forth. I was transfixed for most of the time by his ‘Attack of the 50ft Woman’ T-shirt (which did come into one of the poems). Also in the first half were Alistair Noon, Penny Boxall and Claire Dyer. I knew Penny’s name but don’t think I had heard her read before, and I found her engaging. Claire I met originally at an Interpreter’s House launch, and who I always enjoy hearing read, plus we’re also social media friends. I admire both her poetry and her calm delivery.

Poetry readings always seem to offer up a myriad ways in which I might put my foot it in. This time the only seat I could find happened to be at close quarters to a table with a plate of half-finished food. It appeared to have been pushed to the edge. I assumed the people at the table had finished with it. It smelt. This was a hot, crowded room, after all. So I picked up the plate and started to take it away to the bar, when someone at the table said ‘excuse me’ and asked for it back. Fair enough. But it never did get finished, or cleared away. But by the time the interval came, the air was ripe with the combined respiration of 70 or 80 people in a basement room, so maybe this is a moot point.

Second half, as seen from a different viewpoint – Ruth Sharman read poems about the slow and desperately sad demise of her father. She is incredibly well-spoken (a slightly old-fashioned phrase, I know) and delivered her work with great style. We also heard from Jon Stone (who I remember as co-editor of Fuselit with Kirsten Irving) who looks far younger than he could POSSIBLY be (now that’s the kind of compliment I would relish), Elaine Gaston (whose work I enjoyed so much I forgot to take a photo – and who had the confidence to finish when we were expecting and wanting more) and Nick Makoha to end, whose introductions were excellent but I liked so much of his poetry, although he suffered from one or two stumbles during the poems.

I came away with a distinct impression of which of the poets I would like to read more of, and also quite a few takeaway thoughts – on what to wear for a reading, on engaging with the audience, on improving my diction and vocal tone (I couldn’t help cringing again thinking about my recent performance at the Eyewear launch), on practising, practising, practising…

Jan kindly took the same train as me until we parted at Haywards Heath, and I continued in the company of a zillion Chelsea fans as far as Lewes, then onto a replacement bus to Eastbourne, and to my bed by 1am.

It had been an excellent day in many ways – before even the Troubadour night earlier the day I’d had a poem accepted by the excellent Prole magazine, been to the hospital for the dreaded tests and finally (after a week of worry) pronounced ALL CLEAR. For now, of course. Everything is for now. But no less the sweeter for it.