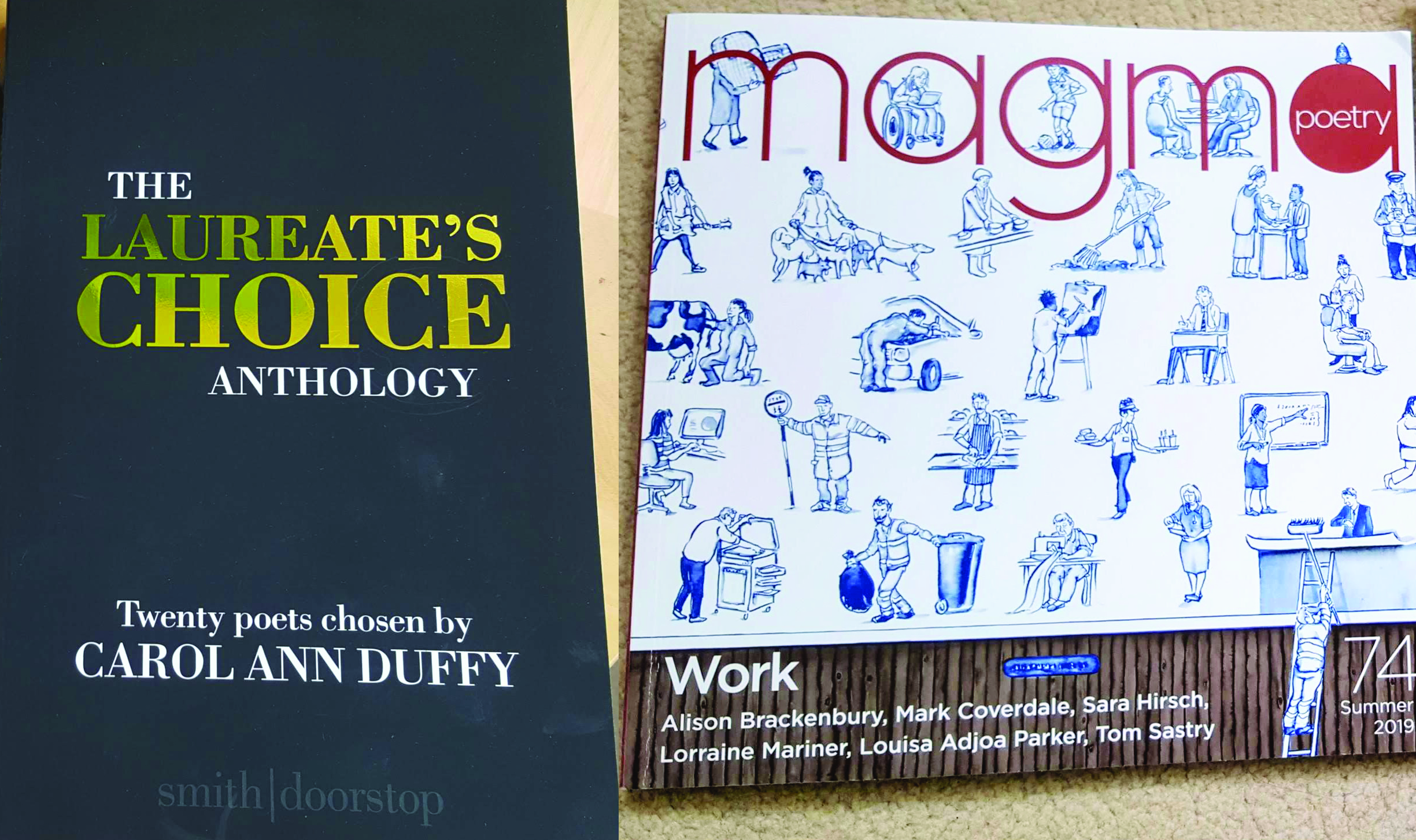 The new edition of Magma, edited by Benedict Newbery and Pauline Sewards, is dedicated to ‘work’, a subject close to my heart. It’s always puzzled me why there appears to be so little written about traditional (or otherwise) workplaces, given how many hours of many people’s lives are given over to work (in the sense of ‘earning a living’, although of course the Magma editors were hoping for plenty of poems about ‘work’ in its wider sense.)

Sarah Mnatzaganian‘s ‘Laying up’ appeared to me with its rich nautical vocabulary (‘…until our halves meet / and lie without stretch or slack, / my luff to your leech, head to your foot, / clew to your tack, throat to your peak’). I loved the evocation of a mass laying off (a subject I’ve tried to write about myself) by Fokkina McDonnell, ‘The empty hours’, with its matter-of-factness capturing the reality of having to stay dispassionate when tasked with an uncomfortable job (‘If we’d stayed at the Bridge Hotel, Kendal, staff / would have recognised us from last time, / would’ve made phone calls last night.’)  Steve Kendall‘s ‘Emotional Labour’ beautifully captures that feeling of doing what is essentially a meaningless job, with random rules and procedures (‘I must send it to whoever’s desk is equidistant from / the first addressee and Emma’), embroidering one’s thoughts with whatever it takes to make it through the day. I think my own poem comes under the category of ‘a bit offputting’, with its crossed out words and slightly odd title (‘Hospitality Management (Diploma) Enrol Now £2,400’). I hope it doesn’t put everyone off reading it though. I know I can be a bit impatient with this sort of thing, rather like my first thoughts about Shaun Carter‘s ‘<title> The office sound in broken code </title>’ – reading through broken code is a bit too close to home for me!

Magma‘s featured poet in this issue is Tom Sastry, who seems to be having a bit of a moment. He also pops up in The Laureate’s Choice Anthology (smith|doorstop), a selection of work chose by Carol Ann Duffy during her tenure as Poet Laureate. As a side note, I did first hear about the ‘Laureate’s Choice’ from Carol Ann when I was on a course with her and Gillian Clarke at Ty Newydd back in 2013. She asked me then (as well as a couple of others) to send her my pamphlet manuscript, for consideration. I didn’t really understand what it was about, but I sent her it anyway. Nothing came of it, but David Borrott, who was on the same course, made the cut. So when this anthology came through my door I was only a TINY BIT bitter!)

But back to Tom Sastry – his poems did rather jump out at me for their originality and intrigue. I loved ‘Difference’, a telling snapshot of a relationship running on parallel lines, the sadness of ‘The Office’ (‘You can bring the name of a bird/ in from the outside, if you like. You can bring its call/ on your ringtone…’ and the simple beauty of ‘Waking’ (‘I dreamt that we were older. It didn’t matter at all.’)

I enjoyed a huge number of the poems in this anthology. Just flicking through again I’m reminded of a few:  Yvonne Reddick‘s ‘The Bait’, Mark Pajak‘s ‘Spitting Distance’, David Borrott‘s ‘felicitous blending of figure and landscape’ and ‘Wolf Fell’, John Fennelly’s ‘Those flowers’.

The anthology doesn’t have a foreword, which is a shame, as I’d like to have read something by Carol Ann talking about the thinking behind the project and her selections. Some of the poets are clearly newcomers, whereas others I would describe as established already,  with full collections and awards to their name. It’s true that they were picked up over a five-year period – the first Laureate’s Choice collections were published in 2015. Nevertheless it makes for an interesting mix of work.

The Laureate’s Choice Anthology is available now from The Poetry Business, £10.

I’ll be reading (and possibly explaining a bit about my poem) at the London launch of Magma 74 on Thursday 6th July, 6.30pm at Exmouth Market, alongside many fine poets including Lorraine Mariner and Alison Brackenbury. Perhaps see you there?

« Look what I found! Virginia Woolf’s ‘A Writer’s Diary’

Poems, schmoems. Couple acceptances, a bit of rejection but hey. » 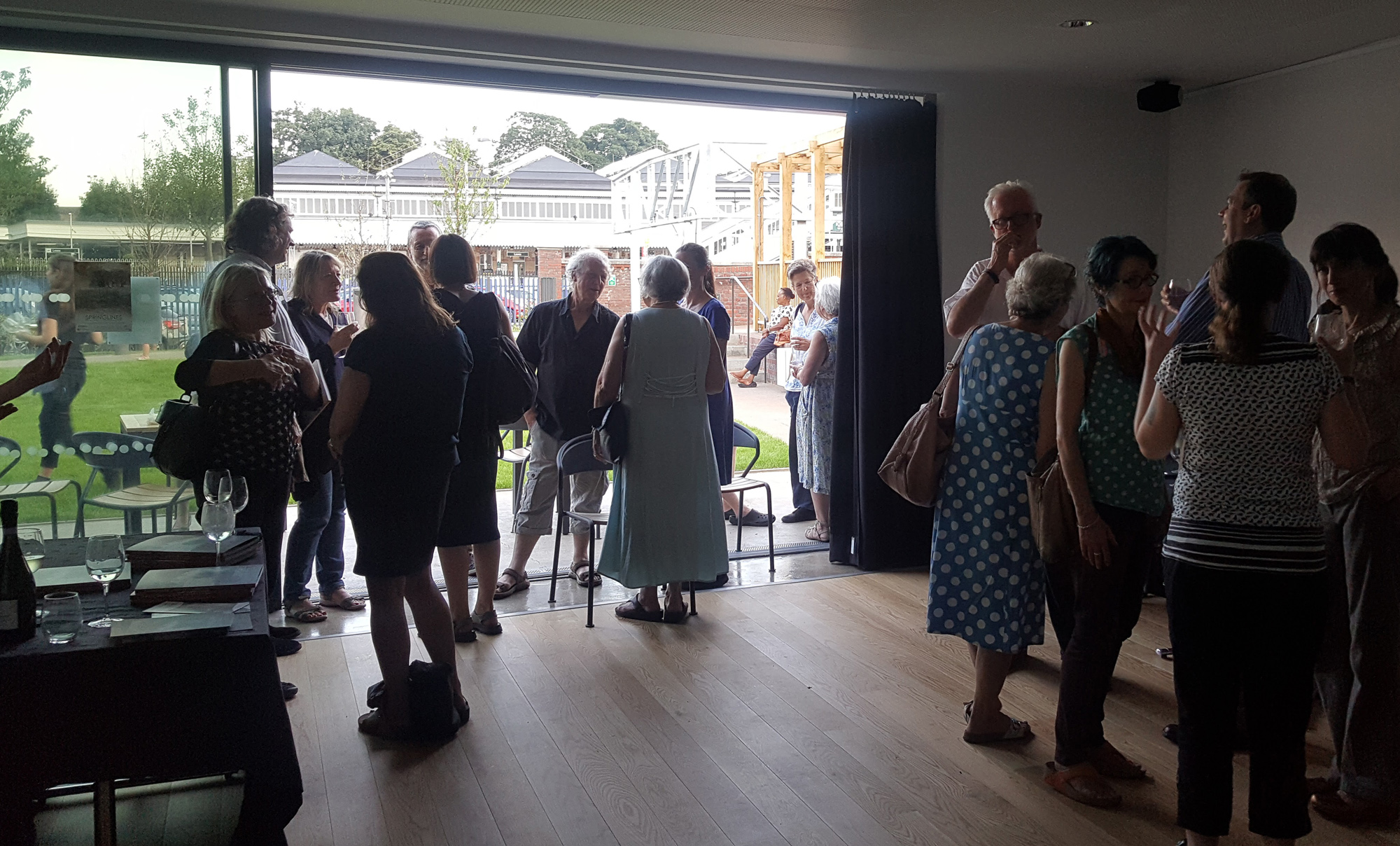