Published by Robin Houghton on February 23, 2020

Up to London yesterday for the The Poetry Book & Magazine Fair aka Free Verse, at a new time of year (February rather than September) and back at Conway Hall.

Recently I’ve been plagued by headaches so after getting off the train I decided what I needed was a nice fresh(?) air walk across London from Victoria to Holburn.  It’s almost a straight line if you don’t mind the crowds – Buckingham Palace, Piccadilly Circus,  Shaftesbury Avenue – but of course I tried to be clever by diving down side streets and avoiding tourists or shoppers. This always means a few poor decisions and at least another ten minutes to the journey. But it’s often serendipitous. On Savile Row I passed a blue plaque announcing ‘The Beatles played their last concert on the roof of this building’. A few streets later I came across Marshall Street Baths, a 1930s building now restored and reopened as a public leisure centre in a most unexpected location in Soho. I remember visiting it when I was working for Nike in the 1990s, to assess its suitability as a venue for a fitness event. In the end we went with Seymour Leisure Centre in Marylebone, another historic old ‘baths’ (of the type mostly disappeared from our towns) now brought into the 21st century.

I love walking around London and discovering quirky, lost or almost lost sites. Author Paul Talling’s ‘Derelict London’ walks are a must if you’re into this sort of thing and within striking distance of the city. I’ve been on a few of them – but you have to book months ahead, as they fill up within minutes of his posting them online. Subscribe to his email alerts and you’re given a day’s warning so you can be ready on the dot of 9am to hit ‘buy tickets’. Paul’s site is fascinating and labyrinthine, but you can sign up for his emails here if you’re interested the walks.

You may wonder what this has got to do with poetry, but in fact it segues very neatly into a little pamphlet from Tamar Yoseloff’s Hercules Editions that I picked up yesterday, called Formerly. It was the first pamphlet from the press, and a collaboration with photographer Vici Macdonald. Vici’s photos of London’s derelict buildings, ghost adverts and Victorian boozers were the prompts for Tammy’s sonnets. Doorstep sellers, ‘Sweeney’-style low life, barmaids and the dead are some of the voices in these poems, as the poet imagines the people inhabiting these nearly-gone and semi-lost places.  It’s accompanied by a pull-out guide describing the locations, and Vici’s and Tammy’s accompanying notes. Fascinating. I admit I’m a sucker for attractive packaging and Hercules specialise in gorgeous covers – fab fonts, spot varnish and gold leaf abound! The press’s latest publication is Martyn Crucefix’s Cargo of Limbs, which I also bought and am looking forward to reading.

Here’s my haul from yesterday: 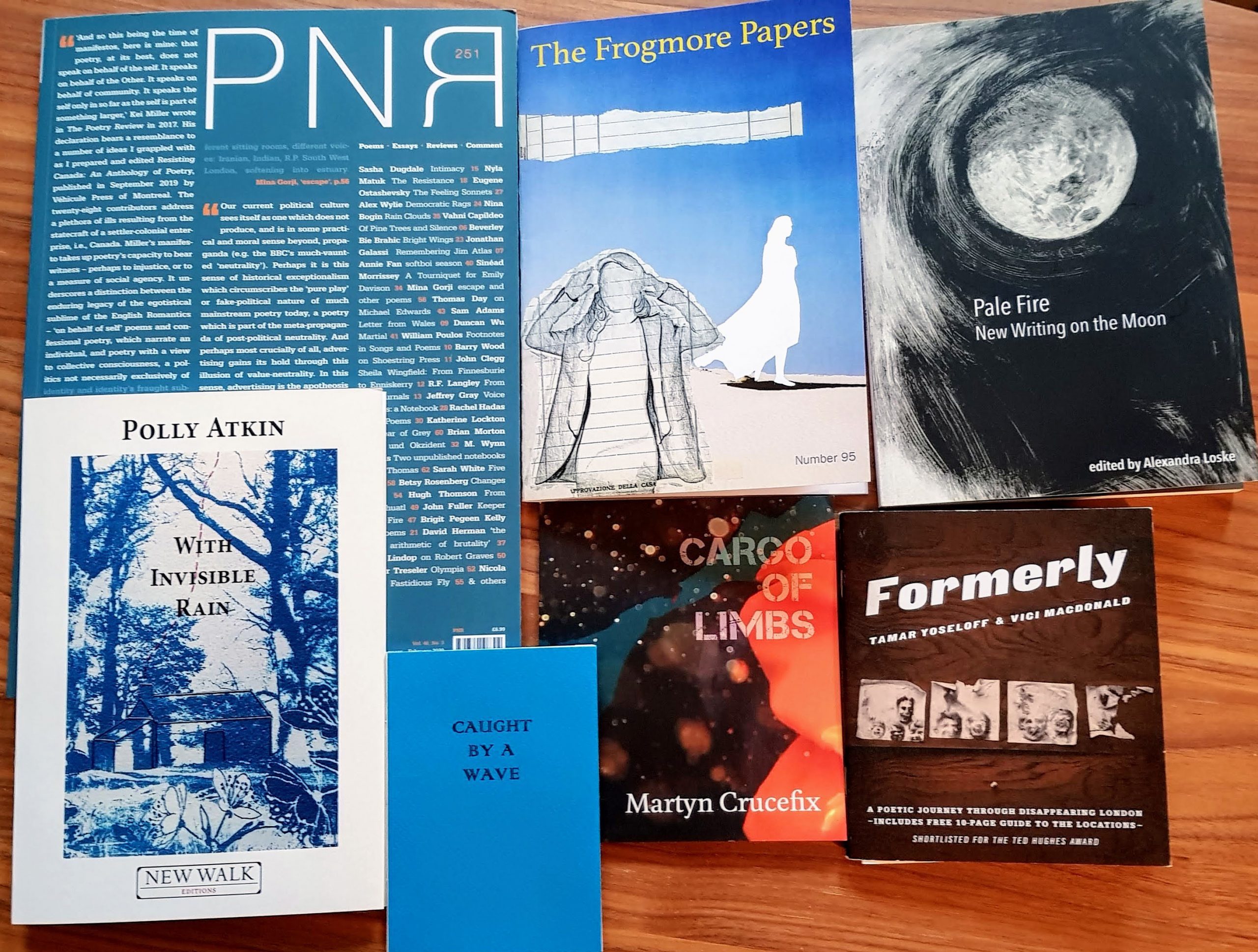 During the afternoon I was helping Jeremy Page on the Frogmore Press table, now becoming a bit of a tradition. Next to us was Andy Croft of Smokestack, with whom I had some fascinating conversations about the ethos behind his press, communist poets, mutual friends such as Peter Raynard, and the like. I covered for his table when both he and Jeremy were on a break, and managed to sell two books and two copies of the Frogmore Papers. I’m not sure I did so well the rest of the afternoon but it was a flying start!

As ever, the Fair was as great chance to catch up, meet for the first time or just wave ‘hello’ to lots of lovely poets including Abigail Parry, Carrie Etter, Susannah Hart, Briony Bax, Tamar Yoseloff, Jess Mookherjee, Sarah James, Jinny Fisher, Liz Bahs, Joolz & Hilaire, Rishi Dastidar and Davina Prince. If I’ve left anyone out I do apologise. It was also nice to chat with people generally while on the Frogmore table, including some people who turned out to be non-poets but just come in to browse and check it out. Which was fantastic. It was quite a crush all day, but I did feel it was the friendliest Free Verse I’d been to so far. Huge thanks to the Poetry Society for their organisation of the event.

I’d like to give a shout to Jeremy Dixon of Hazard Press and his intricately-made books. At a past Fair I’d bought three of his ‘micro books’, this time my eye was drawn to pocket-sized pamphlet called Caught by a Wave, which opens out into two concertinas featuring found black and white photos and overprinted with words that repeat and overspill (rather like waves I guess). Some of the print is overlaid in blue foil. Jeremy explained that he tries not to buy new material but to use what he has already collected. Each booklet featured sightly different paper stock or colour of cover. I have number 21 of 40. A collector’s item! I was also sorely tempted by My Nineties Madonna Scrapbook, but that will have to wait for a future fair, if it’s not sold out.

Conway Hall is an iconic building, home of the Ethical Society and venue for all kinds of events. Yesterday the Main Hall was crammed with poetry people and books, but the balcony provided a quiet place to take time out. Also a good place to take pictures. 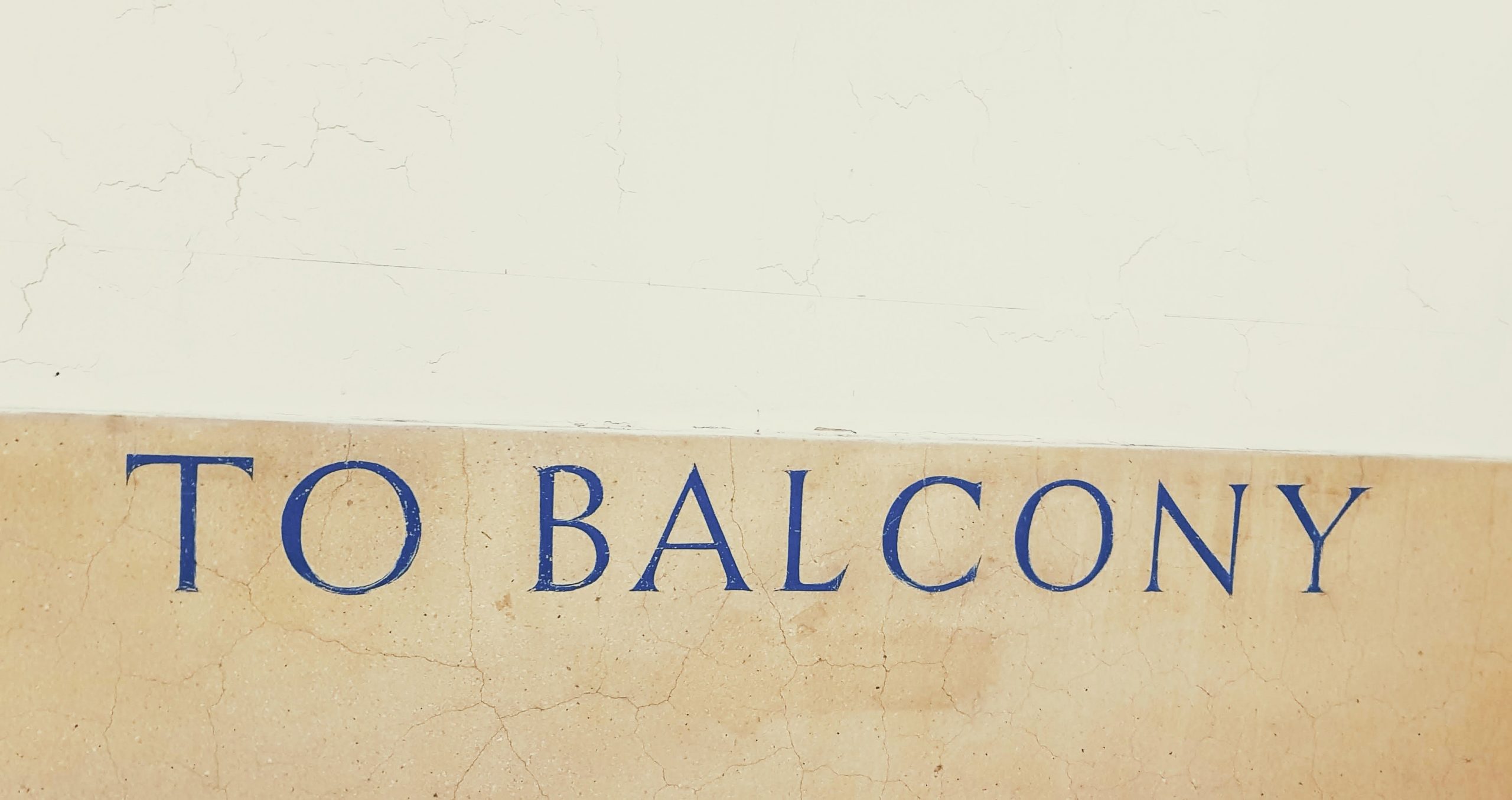 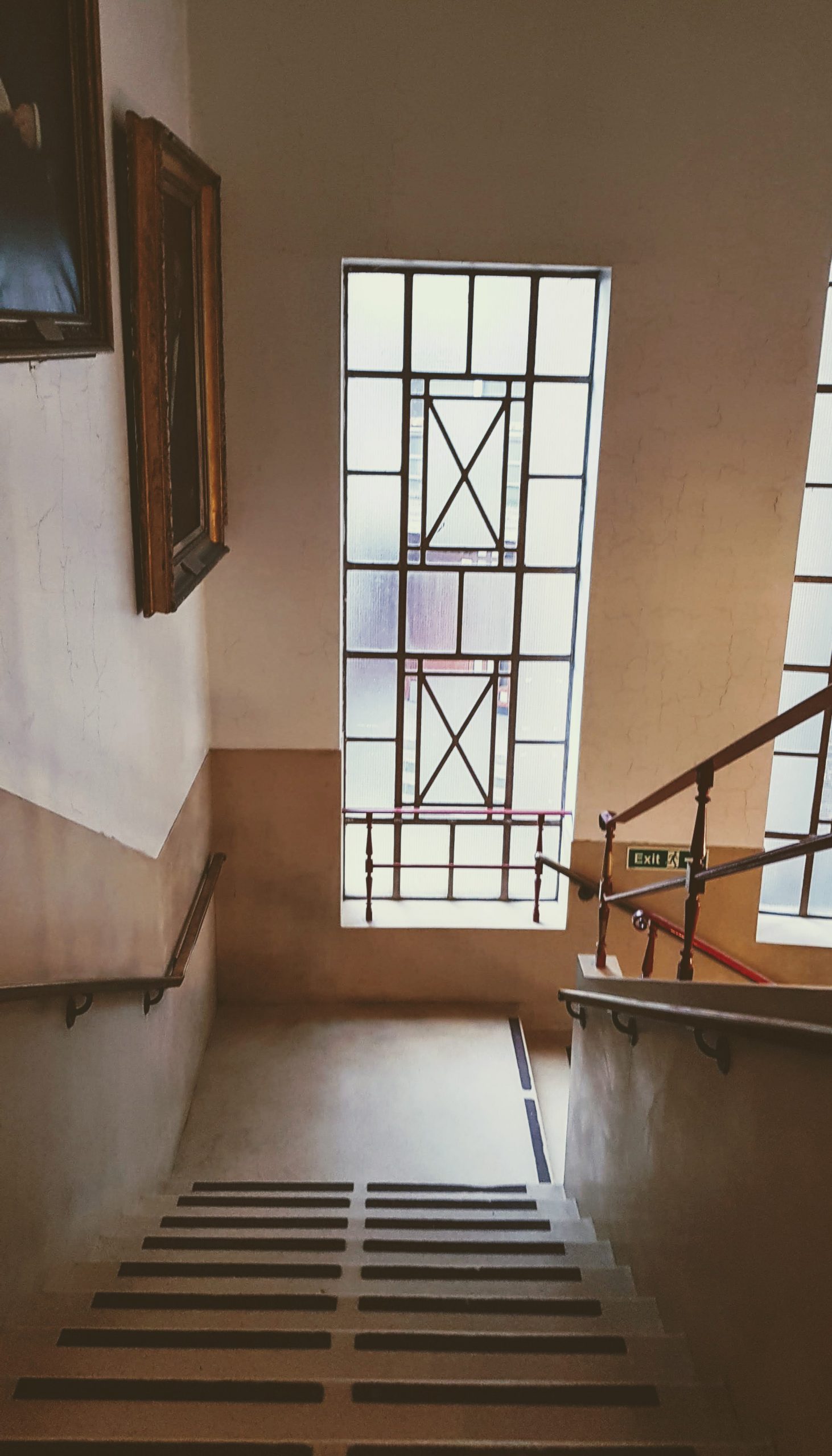 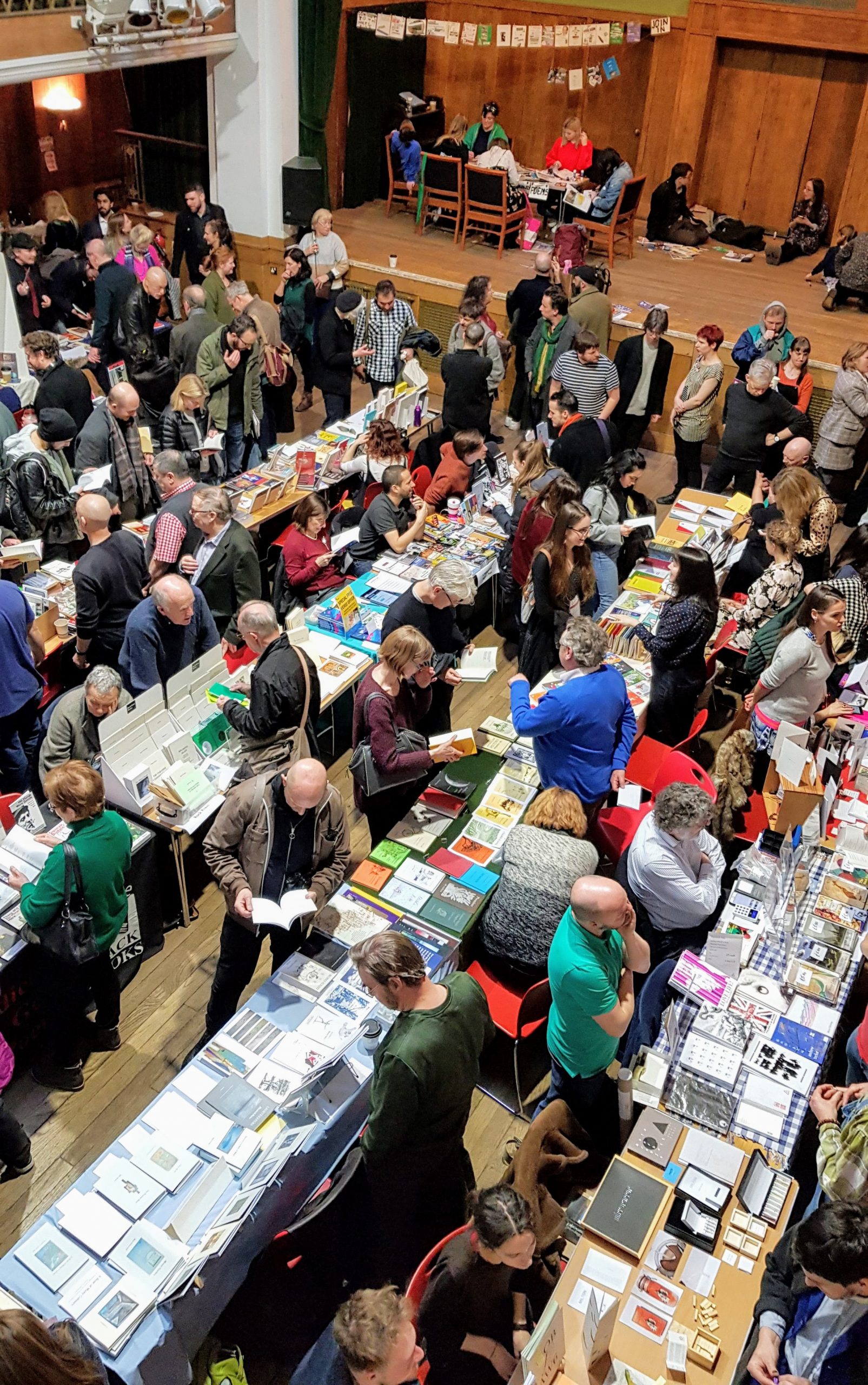 When the Fair ended, I was due to meet a friend for supper in Crystal Palace, that’s deepest South London to those not in the know. I was supposed to walk to City Thameslink station, but took a wrong turning somehow and ended up walking all the way to Blackfriars and catching a train from there. So it was definitely a ‘see London’ day yesterday.

I actually bought two copies of Formerly by Tamar Yoseloff and Vici Macdonald and to celebrate a lovely day at Free Verse I’d like to give one away to one of my blog readers. Just leave me a note in the comments telling me why you’d like it, and if there’s more than one I’ll put the names in a hat and draw a winner.