Ah, National Poetry Day seems to be the unofficial kickstarter of the poetry season (is that ‘open season’)? Last week saw a flurry of competition results and exciting announcements: Facebook was groaning under the weight of congratulations and almost couldn’t keep up.

First of all the Stanza Poetry Competition, won by Graham Burchell to whom I hand over my tiara (although I think it looks better on me, to be honest) and Runners Up none other than my old Brighton Stanza mates Marion Tracy and Tess Jolly. Yay!

Then lovely poet friend Abegail Morley scooped up the Canterbury Festival Poet of the Year award (not exactly from under my nose – I only made the longlist, but I would have put up a fight if I’d been there!) Hurrah!

For my own part, I’ve nothing amazing to announce but I did make the longlist for the Poetry School/Nine Arches ‘Primers’ competition. Longlisting is an interesting idea – I have to remind myself that its purpose is actually to encourage the entrants. Longlistings don’t make it onto CVs (except possibly for the National). But at least you know you came close-ish.

This week sees a lovely bumper crop of readings – on Wednesday 14th October I’ll be back on my old manor in Lewes for the launch of South Magazine 52. I was one of the selectors together with Jeremy Page of The Frogmore Papers so will be be reading a couple of poems alongside a number of the contributors including poet friends Lucy Cotterill and Miriam Patrick. The selection process for South is done anonymously, so I had no idea we’d chosen poems by Miriam and Lucy, but it was a nice surprise.

On Thursday 15th, I’m in … Lewes. Yep – like I never left! It’s the quarterly Needlewriters readings, this time featuring Matthew Stewart, Ros Barber and Caroline Clark. I’m not reading but as I’m on the committee I’m naturally there helping (?) out where possible. It’ll be nice to remind my Lewes poet friends that I haven’t actually stepped off the edge of the planet even though Eastbourne is a foreign country; they do things differently (t)here.

On Friday 16th, that somewhat rakish editor of The Interpreter’s House Martin Malone has kindly invited me to join him for the launch of his new collection Cur (Shoestring Press),  at the Albion Beatnik Bookshop in Oxford. He’s probably hoping to placate me after rejecting the poems I sent to TIH earlier in the year – ggrrr! The other guest readers are fellow Telltale Siegfried Baber, lovely Swindon poetry impresario Hilda Sheehan and the seemingly ubiquitous Roy Marshall, who pops up in every magazine I look at these days. I last met up with Roy in the summer at a reading in Camberwell organised by Richard Skinner.

I need a good night’s sleep after getting back from Oxford because on Saturday 17th I’ll be giving a talk to the Society of Women Writers and Journalists on the subject of … well, it’s a wide open brief, so hang onto your hats, I may be flying without a parachute. But there will definitely be some tech evangelism, some uplifting female empowerment messages and some major myth busting. Wish me luck!

Readings, launches & seeds of a new project or two » 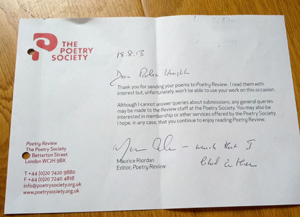