It’s taken a while coming but I’ve found a home for my second pamphlet, ‘All the Relevant Gods’. Those lovely, hardworking folks at Cinnamon Press (Jan Fortune and team) have offered to publish it, due out early next year.

What I’m feeling right now is a mix of gratitude and relief, and a wonderful sense of calm – now I can move on and focus properly on new writing and maybe even work up some of those projects I’ve started in my mind but not progressed.

I also think the process of getting to this point has made me grow up a bit.

I had no idea it would take so long to herd a bunch of poems into a pamphlet, at least, one that a publisher would take a punt on. I’ve always angsted about what my problem could possibly be. I’ve driven friends mad over a pint, moaning about this and that. Despite the odd shortlisting (which regular readers of this blog know, I  – rightly or wrongly – tend not to set much store by), my efforts in pamphlet competitions have always been unsuccessful. But then again I suppose I’ve never believed 100% in my submissions (‘I don’t have a theme!’  ‘I have some themed poems but not enough!’ ‘I don’t have a voice!’).

But three things happened in the last year.

First of all I emailed a publisher I really respect to ask if they would consider reading my pamphlet (apologetically, as I know unsolicited submissions can be a pain) and they agreed to consider it. Although they didn’t take it, the response was kind and included a little feedback. Crucially, I was invited to re-submit once I had worked it up a bit more. This was encouraging – a chink of light at the end of the tunnel. I realised I’d never tried my pamphlet on anyone other than in competitions, and maybe sending it on spec was a gentler, less stressful way in.

Then I sent the same group of poems to a poet/editor and paid for a detailed critique. (I say I paid, but I really want to thank New Writing South here – they have supported me in many ways, not least of all with a modest but crucial grant for mentoring. Huge kudos to them.) The feedback was certainly detailed, and full of suggestions of poets to read and how I might improve the individual poems and the manuscript generally. This was useful – I tried hard to take both good and bad comments on board and forced myself to be grown-up about it, but the report was topped and tailed with phrases like ‘disappointing’ and ‘not the standard required for publication as a pamphlet.’ I couldn’t help feeling knocked-back, and it was several months before I was able to look at the poems again and see what could be improved. It didn’t help that most of them had been published in magazines, which I took to mean they are ‘good’ in some way. But beware – if you also get that feeling when you get a poem published, or it wins something, – ‘it must be good!’ – that feeling is a false friend! I won’t even go into the whole ‘it’s all subjective’ thing here because poets tell ourselves that all the time and it doesn’t always help 🙂

Eventually, after redrafts, and with several pamphlet competition deadlines and reading windows approaching, I asked another poet who I really admire to help me work the manuscript up (paid for with the rest of my NWS grant) . She read the poems. We then spent a long afternoon going through the poems themselves, the ordering, themes, which were weaker, which would work better first or last, and so on. There were criticisms I’d heard before and hadn’t liked (but when you hear the same thing from different sources – hmm!), there were poems I was determined to keep in but ended up removing, there were a few unpublished/new poems that I hadn’t tested on magazines but followed my instinct and included. Being familiar with this poet’s work and meeting face to face made a huge difference.

So something I’ve taken from all this is that I don’t always respond well to the written word alone. This is quite an admission, given my championing of online communication for the last twenty years. And I know that asking for a critique is not asking for praise. You need to know what’s not working. And yet we hear the written word in our heads, and (for me anyway) anything negative -especially if we don’t like the tone of it! – can jump out and take on a far greater significance than anything positive. When the same comments are delivered face to face, with space for all that entails – tone of voice, empathic feedback, the possibility of discussion and clarification, for me this is a marvellous thing.

The reworked pamphlet felt good. I sent it out. It’s going to be published. When I think of all the workshopping groups, magazine editors and poet friends who have encouraged and helped me, and of course you, for reading this blog with its warts and all, I’m truly grateful. There was a huge dollop of luck involved (there always is!) but if any of this sounds familiar, if you’re in the position I was, I would say it is as much to do with perseverance and finding a way to negotiate criticism – in such a way that you make it work for you, without chipping away at your confidence.

« What’s inspired me recently, and a writing/submissions update 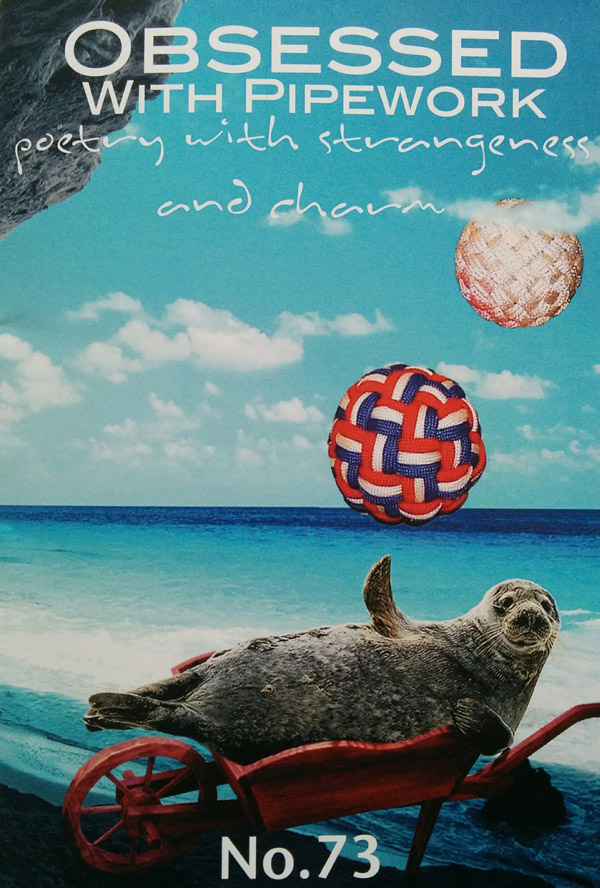