After a couple of weeks of what’s felt like full-on socialising in our sunny garden, I’m enjoying a quiet day alone catching up, which means giving my blogs a little TLC. On the subject of which, I was delighted to come across this observation in Virginia Woolf’s A Writer’s Diary, in the entry for January 20th 1919:

… would VW say the same of blogging, I wonder? People sometimes ask me if blogging takes up a lot of time, but for me it has to be the fastest of writing jobs, because I confess I really don’t spend much time editing. I read it as I go along and sometimes delete entire passages, but the decision is usually made quickly, I don’t think too hard & long. I do try to pick up on typos or bits or grammatical clunkiness before hitting ‘publish’, but just as often things slip through. And I kind of like that -makes it more like regular speech I think. And I certainly wouldn’t want to miss out on any ‘diamonds of the dust heap’!

Poetry magazines seem to be having a (no doubt well-earned) summer hiatus in terms of dealing with submissions, and I haven’t started writing anything new in a few weeks. We should all be outside topping up our Vitamin D anyway. Here’s what are currently out to magazines:

3 poems out for 499 days (yes really  – I’ve sort of decided these are probably dead, and I’m aware of/sympathetic to the reason for the length, but there they are, still heading up the list with their ghostly, greyed-out presence)

3 poems out for 68 days (10 weeks) – this one is tricky, as I asked to withdraw one of them on Submittable, but the system only allowed me to withdraw the whole lot, so I’m not sure if two of them are still under consideration or not. I haven’t resubmitted them elsewhere, just in case… which is probably a bit silly, but there you go.

In addition I’ve got five individual poems out to competitions (a rather high number for me, but I suppose I was running out of suitable/available magazines to submit to) and three pamphlets out to competitions. One of these has been ‘long listed’ by Live Canon, which of course I’m very happy about, but there’s no telling when the final results will come, I suspect not before the autumn. Another pamphlet went to Templar Poetry for their I-Shots competition, the results of which were due (according to their website) by the end of June. However there are no results on the website, and I’ve not heard anything from them, although I have tried asking them nicely on Twitter. I’ve taken this to mean they’re not interested in my pamphlet, which is fine, and I’ve now sent another version of it elsewhere. However, when you pay a fee to enter a pamphlet competition (in this case £18 – and which I’m very happy to do by the way) I don’t think it’s too much to expect a simple email to say ‘sorry, not this time’ or whatever, or acknowledgement of a polite query. Am I being unreasonable?

Lots of lovely stuff on the pile at the moment, alongside the aforementioned VW diary, and the recently re-discovered and excellent Feel Free, a collection of Zadie Smith essays, I’ve also got Vanitas by Ann Drysdale (Shoestring) which I’m reviewing for The Frogmore Papers, and two Smith Doorstop pamphlets recently given to me by Marion Tracy: The Topiary of Passchendale by Christopher North and Sleeve Catching Fire at Dawn by Madeleine Wurzburger (now there’s a TITLE!)

I’m also having a bit of a Camus moment. I wonder if the current state of the Western world is driving me to Absurdism? I think it’s taken me forty years to shake off the association of Camus with the horror of French A level and finally return to him as an adult. Anyway, I’ve read and re-read his strange little essay in ‘The sea close by’, and am looking forward to tackling The Myth of Sisyphus in a Penguin ‘Great Ideas’ edition with a very satisfying cover design featuring embossing. All adds to the sense of anticipation! 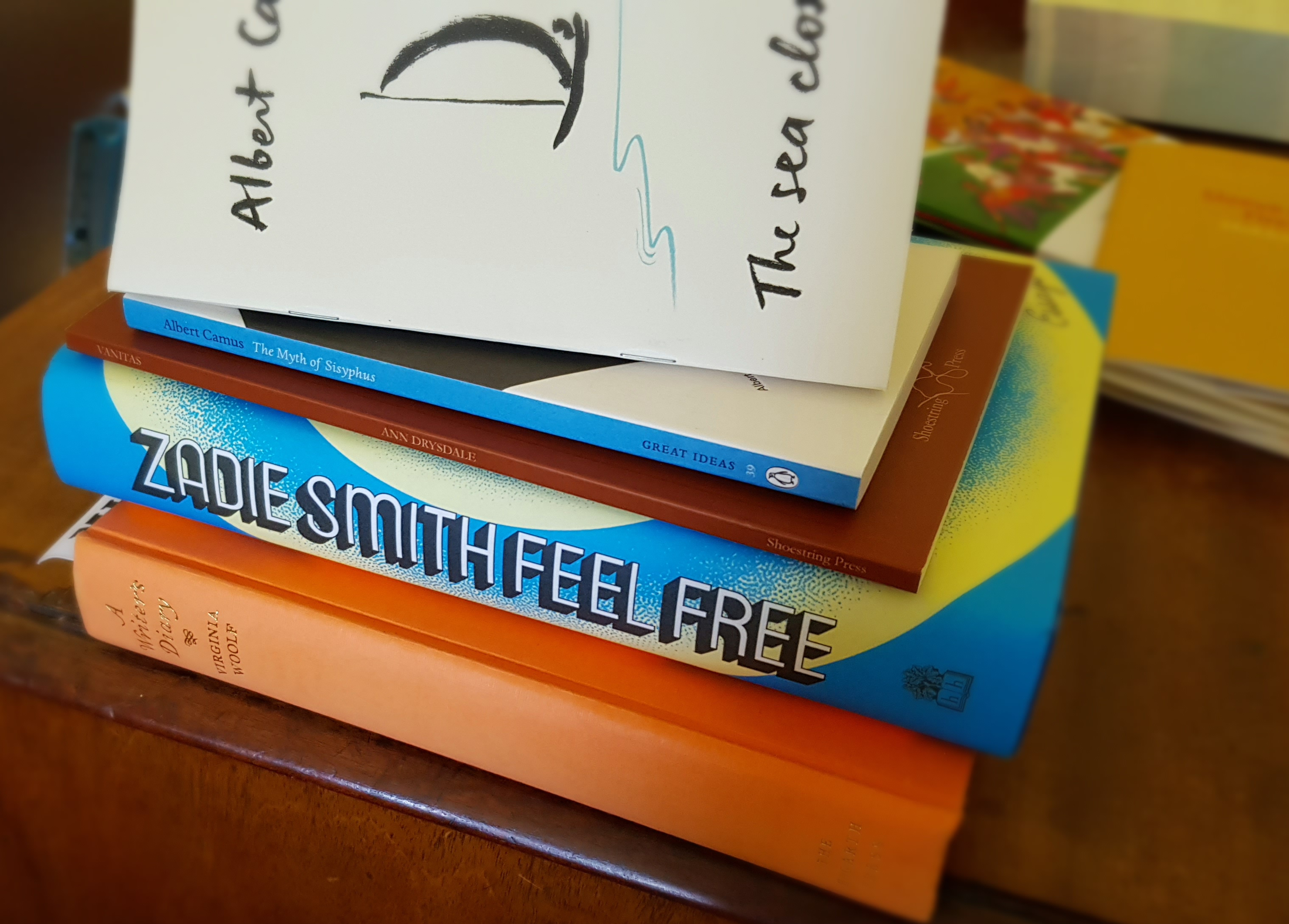 « Poems, schmoems. Couple acceptances, a bit of rejection but hey.

Being on the happy side of a fine line, and other August musings »