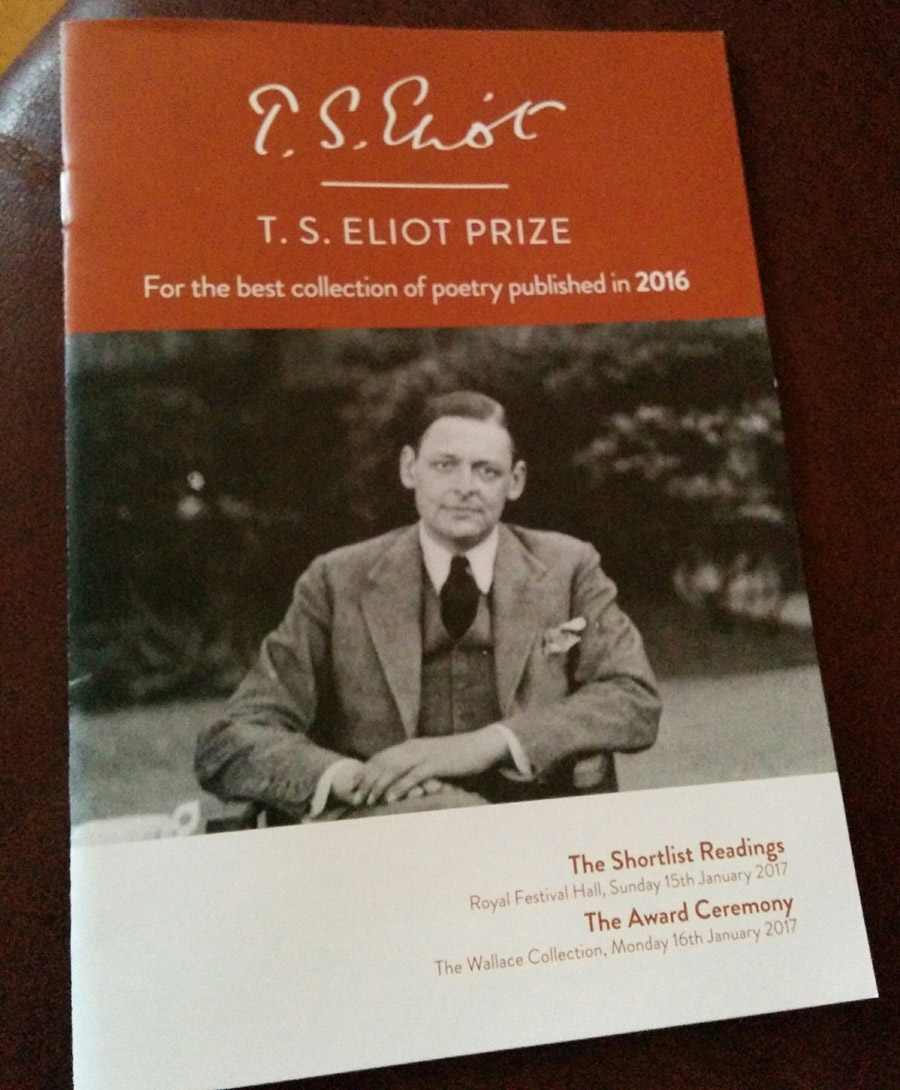 Published by Robin Houghton on January 16, 2017

Katy Evans-Bush‘s TS Eliot shortlist workshop is fast becoming an institution. Now in its sixth year, it’s a fine precursor to the Prize readings which take place the following day, and the prize giving itself the day after that.

The format is straightforward – Katy reads the ten shortlisted books, chooses from them a number of poems to discuss, and invites poets along to the Poetry School in Lambeth for a day to mull them over. I’ve been to one of these workshops once before and had a wonderful time. This time I had to confess I hadn’t read any of the collections, but in a way that’s part of the excitement – to be introduced to them by someone like Katy. Not only does she offer her thoughts and insights into the works, and invite us all into the discussion, but she also brings to the table her formidable background as a writer, reader and and literary critic. Plus the odd bit of insider gossip, of course. 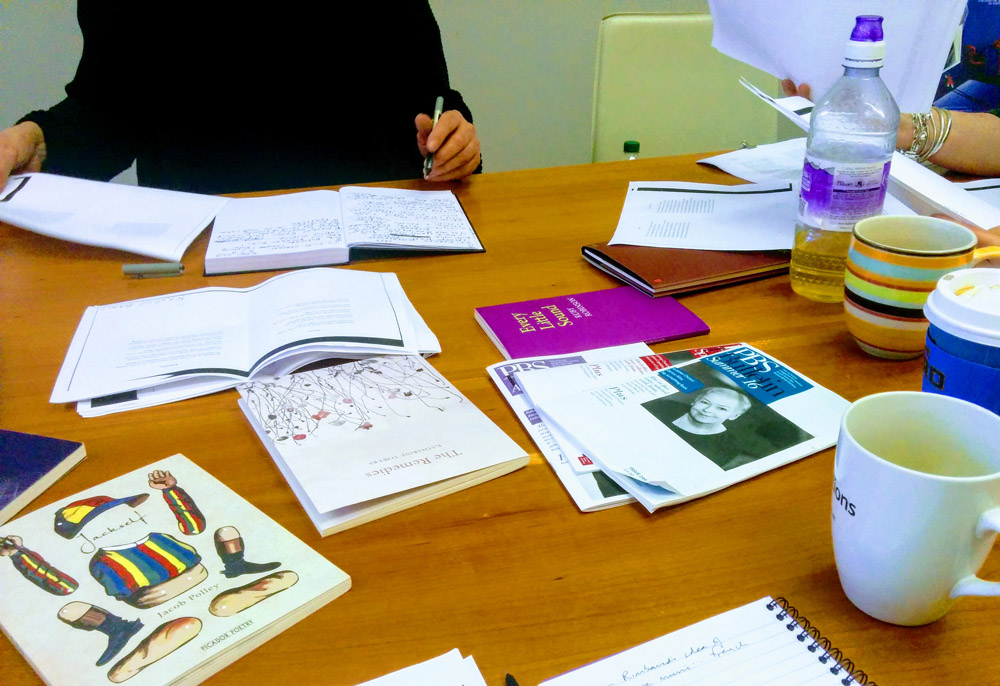 The TS Eliot Prize is probably the highest profile UK poetry prize and that’s not just because the winner gets £20,000. The annual prize readings are a popular draw. I was fortunate to be there at the South Bank last night. The result will be announced tonight – I won’t be at the award ceremony this year (no invitation!? Boo! – although that didn’t stop me going last year!)

Anyway, here’s a quick round-up of the books, a note or two from the workshop and what I thought of the readings. It’s in the order that they read last night. I can’t presume to review any of the collections, but I’ve included links to interesting reviews of each of them, should you want to find out more. Oh, and a few pics at the end.

In an interesting mix of shortlisted poets, O’Donoghue represents the old guard, if you like – experienced, a Whitbread Prize winner, Emeritus Fellow of Wadham College, writing the sort of assured, Heaney-esque lyric poetry one expects to see on the TSE shortlist. In the time-pressured vipers’ nest of the workshop room the few poems we looked at got short shrift, but to be fair it was near the end of the day and we needed cake.

Born in 1985, Ruby Robinson is clearly this year’s newcomer wild card (but not to be dismissed -look what happened last year). It’s a slim collection of little more than 30 poems, in a very small format (pamphlet sized) and even smaller typeface. This book was also shortlisted for the Forward Prize for Best First Collection, so clearly is a standout. In our workshop, various aspects of the sample poems came under attack (errors in grammar, inexplicable line endings).. could envy have been getting the better of us? Surely not!

At the readings, Ruby stood her ground very successfully and if she was nervous she made a good job of keeping it under control.

A collection of mostly short poems, with a section devoted to the Bach Flower Remedies, in which Towers personifies each flower with the qualities it purports to cure. These were clever and entertaining, but workshoppers identified a tendency to sail dangerously close to whimsy.

Katharine came across as a little nervous in the reading. Much as I admire brevity when it comes to introductions, as a member of the audience I found myself feeling supremely uninvolved. It’s a tricky balance.

Here’s a review of The Remedies by Kate Kellaway in The Guardian.

In the workshop, none of us knew anything much about J O Morgan, but Katy filled us in on his previous publications and helped us into Interference Pattern, which doesn’t follow any traditional path. There are no titles, and although there are section markers it’s not clear if the sections are meant to be read as individual pieces. There are some recurring threads but it’s not all narrative. ‘Voices jostling… like radio interference’ was how Katy described it. I was intrigued by the idea of it not being ‘one poem’ but then again clearly meant to be taken as a whole.

I travelled up to London with poet friend Charlotte Gann and by the time we arrived I’d been won over by her enthusiasm for J O Morgan. The reading he gave was mesmerising – all without a script, and with an intensity of presence that gripped me utterly. Slightly scary too – which probably helps if you want to keep people’s attention!

Here’s what Kate Kellaway had to say about Interference Pattern.

At the start of the second half of readings, host Ian McMillan announced that a few people had complained that they couldn’t hear people clearly enough – thank god it wasn’t just me then! And the second half sound was noticeably better.

One of the big guns – this book has already won the Forward Prize for Best Poetry Collection, and it’s clearly a big read. It’s in seven sections and is packed with not just poetry but dense passages of prose. It deals with displacement, leaving, distance, language, identity and many of such topics that are absolutely of the moment. ‘Complex and multifaceted but readable’. One of the workshoppers said she was halfway through and although she thought she’d find it heavy going it absolutely wasn’t.

Last night Vahni was first to read after the break, as a few audience members finished their ice creams and beers. It could have been a challenge but she was confident reader, friendly and fun. My brain struggled however to connect to what she was reading, I felt I’d come to it too ‘cold’ to really get a handle on it. I often find that though, and I also felt it when we read sections of the book in the workshop  – I’d rather have the space and clarity of reading it on my own off the page, with time to look up references I don’t understand, that kind of thing.

Is there anyone who doesn’t love Ian Duhig? He’s such a great combination – a man of the people who’s absolutely grounded in the real world, local communities and politically engaged, generous and humble, but also fiercely intelligent with a masterful grasp of history, the classics and poetry in all forms. AND FUNNY TOO. Yikes! That’s my impression anyway.

It took me a while to adjust to Duhig’s accent in his reading and I wanted him to take the poems more slowly, so we could savour and enjoy. By this point my neighbour was already suggesting that us Southerners were woefully unrepresented – come on, Sarf London! Don’t leave it to Kate Tempest!

Read a review of  The Blind Roadmaker by Jeremy Noel-Tod.

The premise of Void Studies is Rimbaud’s idea of writing series of poems as ‘pure music’ with no discernible message being communicated. He never did it, so here’s Rachael Boast’s version. You have to let the poems ‘wash over you … like listening to Debussy’ was Katy’s explanation. Basically French symbolist poetry, but in English. The poems we looked at struck me as having lovely ethereal language & imagery. Mostly in couplets, short. My kind of poetry, one might think.

Boast has a strong voice, a real pleasure to listen too, although perhaps it was the nature of the poems that they did indeed start to wash over me, without leaving any strong impression.

Here’s John Field’s review of Void Studies, only one of the ten reviews he wrote on the shortlisted books which inexplicably never made it onto the TSE Foundation website, which is a great shame. John is a fine reviewer as evidenced on by his blog Poor Rude Lines, and I’m sure I’m not the only one who would like to have linked to his reviews and help publicise them. Ah well.

Denise Riley, Say Something Back (Picador)

The ‘beating heart of the book’, said Katy, is the central sequence ‘A Part Song’ on the theme of a mother’s grieving for her dead son. We read the whole sequence round the room as part of the workshop and it was certainly moving. ‘A stupendous book’ was Katy’s pronouncement, and Riley was ‘a poet’s poet with a fine reputation.’ Katy pointed out that she’d come a long way, from being last published by Reality Street (‘Reality Street! Not even Shearsman!’) to Picador – a big leap, well deserved though. Indeed at the end of the day most people in the room felt this could be the winner.

The best word I can use to describe Denise Riley’s reading is ‘defiant’ – there was a strength of feeling in her delivery which was compelling, although I struggled with her chosen emphasis at times, and the long pauses between words. We didn’t get to hear ‘A part song’ which I was kind of hoping for.

Read Dave Coates review of Say Something Back.

Surely gets a prize for the most eye-catching cover, and in fact I absolutely LOVED all the Picador covers, and the size/shape of them. Full marks, Picador packaging peeps.

So here’s Jackself – a collection of poems about various Jacks of legend, phrase & fable, of childhood – Jack Sprat, Jack Frost, Jack O’Bedlam… Englishness and a sense of place (Polley’s place – the English/Scottish border country), themes of being trapped, a confrontational, unstable world. Katy says ‘You’re either with him or you’re not’.

In the workshop I was with him, I enjoyed the poems and the handling of the themes. Made me think a bit of Janet Sutherland’s Bone Monkey, or Ted Hughes’s Crow, although less dark than either of those (as far as I could tell from what I read).

Polley’s reading was the penultimate and having to go before Alice Oswald is also a pressure.  I remember really enjoying his reading from The Havocs a few years ago. More self-assured now, but a little more mannered in his delivery. I still enjoyed the poems though.

I struggled to find a review of Jackself, but you might be luckier than me!

What can I say here? I loved the poems we read in the workshop, including ‘Swan’ which she then read last night. Falling Awake won the Costa prize already and Oswald is a previous winner of the TSE Prize.  Her reading was magnificent, all recited from memory which I love but it wasn’t just that. She had such a presence. ‘Commanding presence’ is a cliche but it really was that.

There are loads of reviews of this book but how about this one by Pierre Antoine Zhand.

And so to the result – only a few hours to go. My metaphorical money is still on Alice Oswald, although my fellow workshoppers came down in the Denise Riley camp. With Vahni Capildeo the other in the triumvirate of ‘likely to wins’. Or how about J O Morgan as a dark horse?

And on the way home, what should I pass than Pimlico Plumbers and their amazing Christmas decs – in the middle of January! 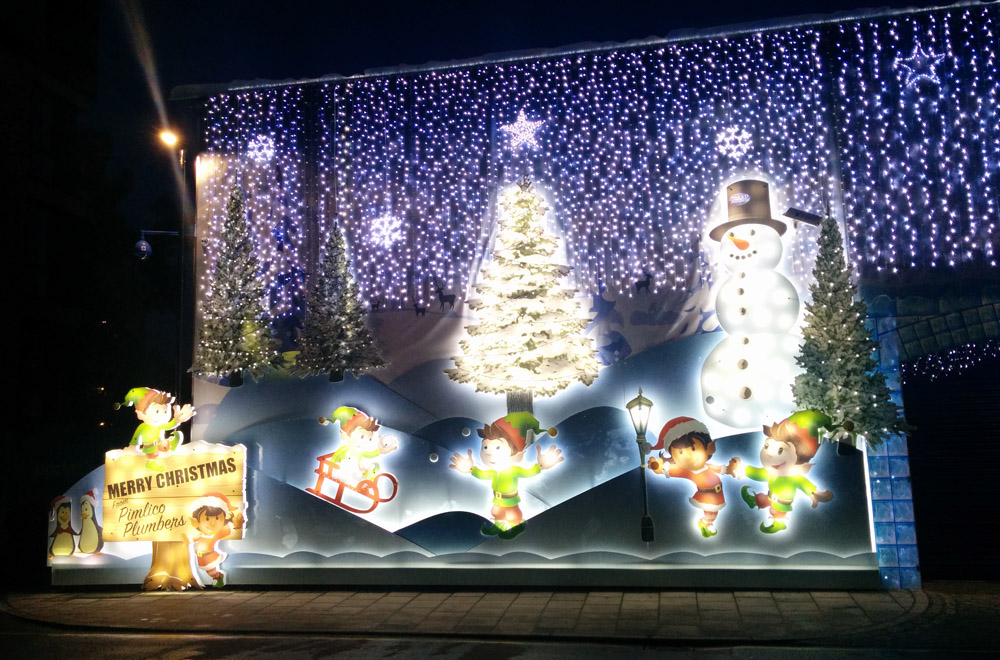 But London was as beautiful as ever at 5pm in January…