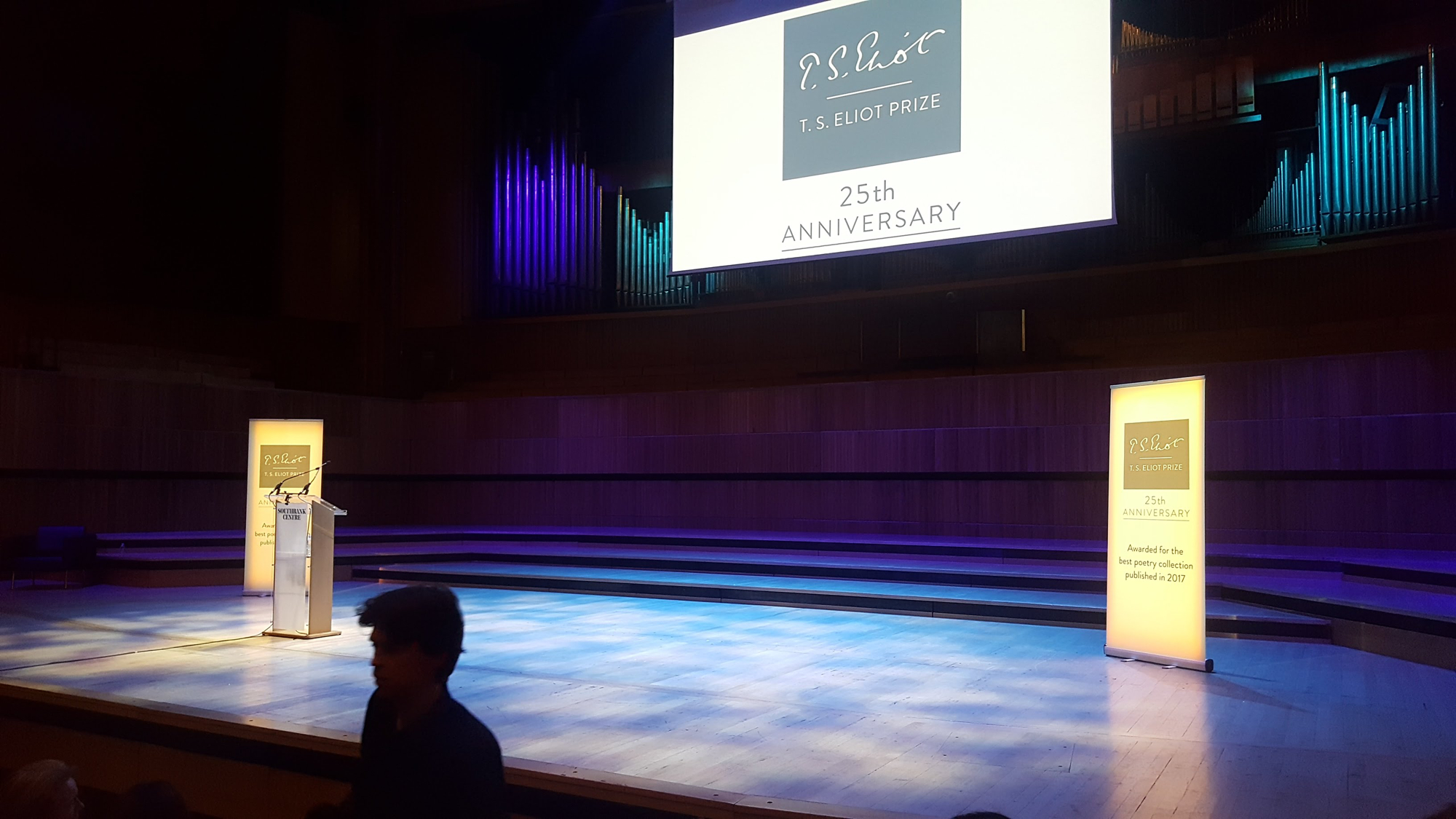 Published by Robin Houghton on January 20, 2018

Hardly seems like a week ago that Peter Kenny and I dared travel to London’s Southbank for the annual T S Eliot Prize readings. Eschewing the very unreliable train service, I elected to drive, as I’ve done for the past few years, only to find the M23 (the main road to London from these parts) closed halfway up, enforcing a 45 minute crawl around the outskirts of Gatwick airport. Interesting fact: in 1833 it was possible to travel from London to Brighton in 3 hours 40 minutes. Last week it took about 3 hours by car.

Anyway, thankfully I had the pleasure of Peter’s company and we arrived 15 minutes before the readings began – not really long enough for the traditional schmoozing, poet-spotting and generally mwah-mwah-ing, but not a disaster. Sharing our row were the lovely Peter Raynard of Proletarian Poetry and Rishi Dastidar who seems to have been everywhere you looked last year, not least of all thanks to his debut Nine Arches collection Ticker-Tape which has been racking up some great reviews. Then how strange is this – who should we be sitting next to me but Maria Isakova-Bennett and Michael Brown, the editors of Coast to Coast to Coast who I met in Liverpool just a few weeks ago. Small world!

The readings this year didn’t excite me a great deal, I admit, and I regret not being able to go to Katy Evans-Bush‘s excellent pre-event reading day this year, in which she goes through all the shortlisted books and we read excerpts and discuss. When I’ve been to this in past years it has really enhanced my enjoyment of the readings.

Having said that, standing out for me were Tara Bergin, Caroline Bird and Ocean Vuong. All three of them grabbed my attention and kept it, albeit in quite different ways. I wasn’t surprised to hear that Ocean Vuong was the winner, given that his collection Night Sky with Exit Wounds has already been phenomenally successful. His reading was extraordinary – he’s a slight figure on the stage, but there’s a huge intensity about him that makes you lean forward in your seat so as not to miss a single word. (Interesting fact: T S Eliot wouldn’t have been eligible for the T S Eliot prize, as his books weren’t long enough.)

On Thursday it was the quarterly Needlewriters event in Lewes, in which three writers read from their work. I was drawn into poems on the theme of snow by Robert Seatter and couldn’t resist buying his book just out from Two Rivers Press, entitled (oddly enough) ‘The Book of Snow’ – as much for the look of it – the beautiful combination of words and graphics – as for the poems themselves – I admit – but then I am a bit superficial like that. Can’t wait to read it. The evening was bitter-sweet though – founder member and ‘head girl’ Clare Best is moving to Suffolk in a month or so, so this was her last Needlewriters (as one of the organisers, but I’m sure we’ll entice her back for the occasional visit.) Very sad indeed to see her go, although it’s wonderful and exciting transition for her. 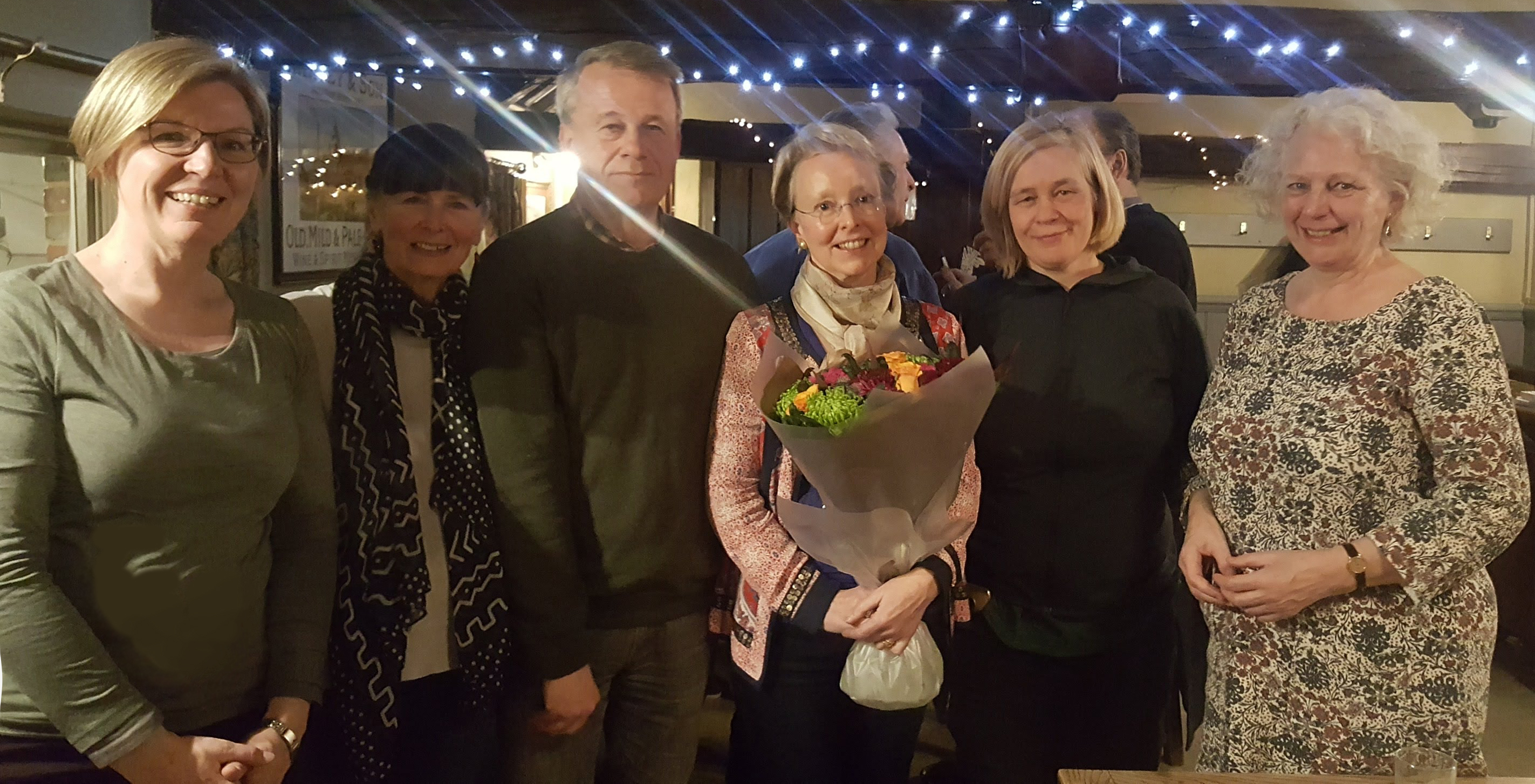 Meanwhile I’m struggling a bit with a new computer (new software to learn, endless passwords to re-enter, various versions of files to consolidate ) which means my submissions spreadsheet is in disarray, so I must sort that out. I’ve also got a pamphlet launch to promote (see next post) and two choir concerts also to promote (and learn the music for) taking place a few days after the pamphlet launch. I’ve also recently started volunteering at Brownies, and have promised to teach the girls a song to sing for ‘Thinking Day’ – which happens to be the same day as my pamphlet launch – I’m going to make it all work somehow! Please wish me luck…